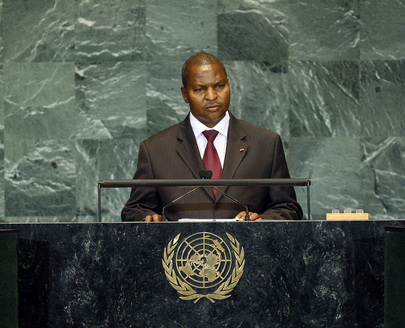 FAUSTIN ARCHANGE TOUADERA, Prime Minister of the Central African Republic, reminded the Assembly that it had a number of challenges to overcome, including peace and security, the threat of climate change, terrorism and United Nations reform.  The new challenges of a changing world, including economic development and social progress, could only be tackled through international cooperation.  That was why multilateralism seemed like the only way to solve the world’s problems.
He said the global economic and financial crisis was unprecedented in terms of its ramifications.  Some exit strategies might include developing State-friendly commercial capacities and deploying strategic partnerships between different regions.  The food crisis triggered by soaring prices had plunged a large part of the planet into famine and extreme poverty, leading to deteriorating terms of trade between the countries most affected, including the Central African Republic.
Agricultural growth must encourage sustainable development as well as sound environmental resource management, he said.  Plans for long-term growth should be in line with the Millennium Development Goals, and the Assembly session was the occasion for international organizations to commit to mobilizing funds to help attain them.  Actions in favour of least developed countries must be reviewed to address their socio-economic challenges.
Turning to climate change, he said that for countries with weak economies, the cost of adjusting would amount to billions of dollars, further straining limited resources.  Rich countries should take responsibility in order to attain the goals they had set themselves in the Kyoto Protocol.  Hopefully the forthcoming climate talks in Copenhagen would take into consideration the mutual concern of Central African countries of the Congo Basin forest, the world’s second largest of its kind.  The Copenhagen Conference must help those countries attain a “win-win” situation, which would enable them to strike a balance between protecting natural resources and embracing economic development.
He urged the United Nations Disarmament Commission to promote resolutions on multilateralism with regard to disarmament, non-proliferation and cutting military budgets, while respecting environmental norms.  As well as condemning all terrorist acts, he reiterated his country’s support for the fight against terrorism, noting that illegal armed groups threatened the stability of countries like the Central African Republic.  Tackling the movement of arms was the best way to get to the bottom of growing numbers of illegal armed groups and cross-border crime, he added.
The United Nations had the well-entrenched legitimacy to provide solutions to the world’s many problems, he said.  That was why States thought its role was crucial and that reforming the Organization was vital to helping it reach its full potential.  Restructuring the Security Council in a transparent manner and revitalizing the General Assembly were key priorities.  Expanding the Security Council would give it scope to represent more regions and provide new approaches to peacekeeping and international security.