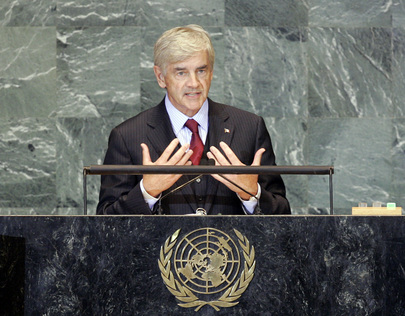 LAWRENCE CANON, Minister for Foreign Affairs of Canada said that, as one of the United Nations founding members, his country reaffirmed its commitment to collective action to pursue shared objectives, as it faced up to shared challenges.  The global economic and financial crisis, international security and environmental challenges had shown how far countries had become interdependent on one another.  By prioritizing economic recovery and growth, his Government had taken action to mitigate its impact on Canadians.  He stressed that recovery at home could not be isolated from global recovery.  Protectionism posed a common threat to all of the world’s economies, he warned, pressing for collective action to resist that urge by way of vigorous high-level talks.

Moving on to peace and security, he said thousands of Canadian aid workers, police and soldiers were working worldwide under United Nations-mandated missions.   Canada and the United Nations shared the responsibility to eradicate terrorism in all its forms.  He pinpointed that the Taliban were part of the threat to global peace and stability, and that Canada was committed to eradicating that threat.  With nearly 3,000 military personnel and more than 100 civilians, Afghanistan was his country’s largest and most significant mission, whose aim was to ensure a secure and stable country that was led by its people.  It would be looking to Afghanistan’s political leaders to improve priorities, such as good governance, the fight against corruption, reconstruction and economic growth.  Leaders would have to do that by promoting human rights, especially that of women and girls.  Between 2006 and 2011, Canada was also making a robust assistance commitment to war-torn Haiti -- $555 billion to promote democracy, security and economic growth.  Many other challenges remained.  He regretted the worsening security situation in Southern Sudan and asked for the Comprehensive Peace Agreement to be implemented, calling on all parties to cease hostilities.  To find a durable internationally led peaceful solution to the ongoing conflict, Canada had contributed more than $640 million since 2006.

News that Iran had been building a covert uranium enrichment facility had left his country feeling profoundly troubled, he said, condemning its refusal to abide by Security Council resolutions.  He called on Iran to allow IAEA immediate and unfettered access to that facility to ensure a full investigation.  Expressing hope that talks between the five permanent members of the Council plus Germany and Iran would address the continued dishonesty surrounding the country’s nuclear programme, he reaffirmed Canada’s support on action to deal with that threat to global peace and security.  He praised President Obama’s initiative to lead the United Nations Security Council summit on nuclear non-proliferation and nuclear disarmament, and said there must be political will to ensure that States complied with the vision of a world free of nuclear weapons.

Canada remained committed to a post-2012 global climate change agreement that was in line with a United Nations framework on the issue.  It also supported durable low-carbon global growth and was committed to reducing greenhouse gas emissions by 20 per cent from 2006 levels by 2020.  As a world leader in clean technologies to fight climate change, Canada sought new partnerships to develop and deploy them.  “The global phenomena needs a global response,” he said.  Above all, all major economies had to meet that global challenge in the context of an effective and an equitable agreement in Copenhagen, he stressed.

Adaptation to the impacts of climate change was an important issue for all countries, he said.  It must be a core element of the post-2012 regime, in order to build resilience to the impacts.  He also expressed his country’s responsibility to ensure the sustainable development and environmental protection of the sovereign Arctic region.  Through bilateral and multilateral engagement, Canada would carry on showing leadership on Arctic matters related to shipping, oil and gas, as well as biodiversity.
He said that Canada, during its recently completed term on the Human Rights Council, had worked to make it a forum for constructive international dialogue.  He affirmed that Canada would continue to promote human rights and freedom of expression, and to advocate for those detained by unjust regimes, while supporting those who had made genuine strides to advance human rights.

Finally, on United Nations reform, he urged States not to let the dizzying succession of major events cause them to lose sight of the importance of reforming the Security Council, citing it as the “most powerful means of collective action”.  Real reform had to lead to more transparency and accountability, to adjust to the challenges of a wider global community, including a long underrepresented Africa.  He concluded by reminding States that they must “never forget” that, in facing the world’s challenges, they possessed the most powerful tools: freedom; democracy; human rights; and the rule of law.