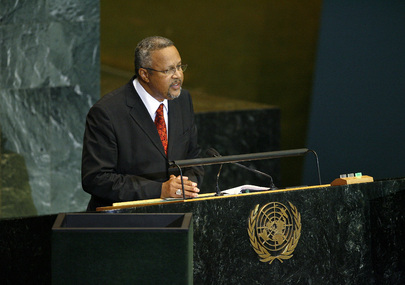 ANTONIO PEDRO MONTEIRO LIMA ( Cape Verde ) expressed “unequivocal disdain” for the violence in neighbouring Guinea, and then paid tribute to the victims of the “odious act”, which threatened stability within the region.  Peace and security were essential to the progress of humanity, he declared, and said that those two principles had never been threatened the way they were today.
Cape Verde was greatly concerned by threats such as terrorism, human trafficking, weapons proliferation, and drugs, all of which threatened the foundation of the democratic rule of law, and undermined the legitimate wishes of the people.  They also harmed development efforts and thus, what was needed was a “fair-balanced multilateral perspective” to help.
Continuing, he said organized crime was becoming a problem in Cape Verde, which was “fertile ground” for the spread of such activity because it was an emerging democracy with a fragile economy.  His country was unable to deal with the problem alone, and he called for a deploying of joint capabilities.  Cape Verde would not allow itself to be poor and unstable and the key would be to diversify partnerships, and use multilateralism to combat challenges.
He noted efforts to establish a Zone of Peace in the South Atlantic, and said such an arrangement was important if countries in that region were to ensure progress and peace, as well as to reach the Millennium Development Goals.  He mentioned a likelihood that the Goals might not be reached because of the financial crisis, especially in light of a decline in global gross domestic product (GDP), and an increase in poverty, unemployment, malnutrition and the cost of goods.  He urged international partners to develop joint efforts especially for developing countries to become more inclusive, in order to avoid an unprecedented human crisis.
He affirmed the urgent need to tackle climate change and noted the success of the Secretary-General’s Climate Change Summit last week.  If the world did not act now, it might be too late to avoid serious harm being done to the planet.  Participants at the Summit had been convinced there was no more time for evasion and that the moment for action was now.  For example, coastal regions and small island nations faced serious risks, and Cape Verde, for its part, was coping with desertification and water shortages.
He said Cape Verde had made efforts to take the most advantage of river basins, saving water and using modern technology, especially in irrigation.  There was an active policy which helped the local agricultural sector.  In addition, research and development for renewable energies was under way.  The international community must do all it could to help small island nations, especially since forced migration due to climate change was a serious concern.  He reiterated the importance of the ocean and the need to preserve it as a unique repository.