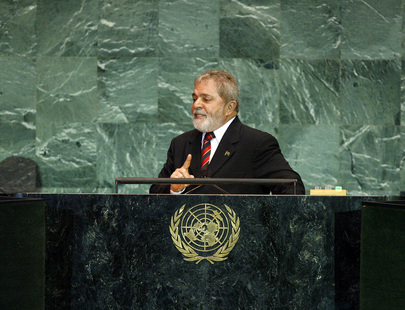 LUIZ INÁCIO LULA DA SILVA, President of Brazil, said he would focus on three perils haunting the planet:  the ongoing economic crisis; the lack of stable world governance; and the threat of climate change.  As he had said a year ago, history would never forgive the serious blunder of dealing with the “impacts” rather than the “causes” of the crisis.

For example, he said, the current economic crisis was more than a crisis of “big banks”.  It was a crisis of “big dogmas”.  An economic, political and social outlook that had been held to be unquestionable had simply fallen apart.  A senseless system based on absurd doctrines, such as markets regulating themselves, had proved itself bankrupt.  Furthermore, the fact that a total collapse of the system had been avoided had apparently given rise to irresponsible acquiescence in certain sectors.  Most of the underlying problems had been ignored.  There was enormous resistance to adopting mechanisms to regulate financial markets.

At the G-20 meetings and in other venues with world leaders, he continued, he had insisted on the need to irrigate the world economy with a significant volume of credit.  He had defended the regulation of financial markets, the widespread adoption of anti-cyclic policies, the end of protectionism and the fight against tax havens.  He had proposed true reform of the multilateral financial agencies.

The world could no longer be run by the same rules and values that had prevailed 65 years before, he stated.  Likewise, the United Nations and the Security Council could no longer be run under the structures imposed after the Second World War.  The world was growing “multilateral” and also “multi-polar,” based on regional integration, such as South America’s creation of the Union of South American Nations (UNASUR).  And rather than being in conflict with the United Nations, such a world would invigorate the Organization.

It would take political will to confront and overcome situations that conspired against peace, development and democracy, he continued.  Without political will, throwbacks such as the embargo against Cuba would continue.  There would be more coups such as the one that had toppled the constitutional President of Honduras, granted refuge in Brazil’s embassy in Tegucigalpa since Monday.  The international community must demand that he be returned to the Presidency of his country and must ensure the inviolability of Brazil’s diplomatic mission in Honduras.

Finally, he said, the threat of climate change would continue to grow unless all countries took action to turn back global warming.  His country would arrive in Copenhagen with precise alternatives and commitments based on a National Climate Change Plan that included an 80 per cent cut in deforestation of the Amazon by 2020.   Further, despite the fact that Brazil was self-sufficient in oil and major reserves had recently been found, Brazil would not turn into an oil giant but would consolidate its role as a world power in green energy.

Meanwhile, he said the developed countries must set emission-reduction goals far beyond those tabled to date.  Plus, the funding for technological innovations to protect the environment in developing countries was totally insufficient.