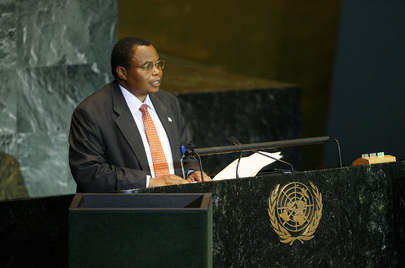 C.T. NTWAAGAE ( Botswana ) welcomed the United Nations reforms made to streamline rules, mandates and policies that would promote transparency, coherence and efficiency.  Global cooperation was necessary to meet today’s challenges and uplift the living standards of people around the globe.   Botswana was committed to tackling the devastating HIV/AIDS pandemic and had attended the mid-term review last year of the status of implementation of the 2001 Declaration of Commitment on HIV/AIDS.  He stressed that the global economic crisis had placed people living with HIV/AIDS at greater risk as budget constraints prompted cuts to health programmes.  It was essential that Governments move towards the 2010 Goal of achieving universal access to HIV/AIDS prevention, treatment care and support.
Turning to situations throughout the wider continent, he said Somalia remained a dangerous place rife with kidnappings, banditry and piracy –- even peacekeepers had not been spared.  International support and assistance was urgently required to deploy a stabilization force to strengthen the African Union Mission in Somalia (AMISOM) and support long-term peace in the country.
Regarding the situation in the Democratic Republic of the Congo and the Great Lakes Region, he appreciated the collective efforts of the United Nations Organization Mission in the Democratic Republic of the Congo (MONUC), the Special Representative of the Great Lakes Region and other international initiatives.  But the international community should not underestimate the gravity of the challenges that hampered that Region’s lasting stability and sustainable development.  The efforts of regional bodies like the African Union must be combined with the work of the United Nations to help Great Lakes countries manage conflict and post‑conflict situations.
Botswana was disturbed by the emerging trend in Africa, and other parts of the world, of coups and unconstitutional transfers of power, he continued, expressing his “unreserved condemnation” of the coups that had taken place in Mauritania, Guinea, Guinea-Bissau, Madagascar and Honduras.   Botswana would have been very disappointed “if someone like [Andry] Rajoelina, who masterminded the overthrow of a democratically elected Government in Madagascar”, had been allowed to address the Assembly.
He said the Southern African Development Community (SADC) had correctly decided to suspend the regime in Madagascar from participating in councils and structures of the subregional organization.  The African Union maintained the principled position of automatically suspending any regime that came into power by overthrowing the constitutional order.  The international community had to be united in its determination to isolate the regime in Antananarivo and could not embrace them in the international forums.
Another disturbing development that undermined democracy was the attempt at constitutional change by leaders and political parties that had lost elections.  The international community could not condone leaders whom, for their own selfish interests, changed their countries’ constitutions to ensure they remained in power.  The world needed to ensure that elections were credible and reflected the sovereign will of the people.  Governments should not be allowed to conduct elections and then temper the outcome to suit their interests.  With respect to the International Criminal Court, Botswana reiterated its position that it was fully committed to respecting the Court’s integrity and impartiality, and supported the principle of universal jurisdiction under international law and practice.