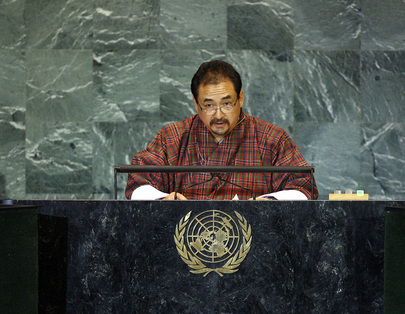 Turning to the Millennium Development Goals, he said Bhutan was clearly on track to achieve most of its targets, but faced major challenges in gender equality in higher school education, and the area of maternal health.  It needed continued development assistance to meet these goals.  At a meeting in July 2008, Bhutan launched the Tenth Five-Year Plan with the primary goal of reducing poverty and implementing the Millennium Development-based initiatives.
On the issue of climate change, he said Bhutan’s fragile mountain ecology faced potential risks, such as an adverse impact on its vital agricultural sector. The erratic weather patterns and threats of glacial lake outburst floods were very concerning.  Out of about 3,000 glacial lakes, 26 had been identified as being in imminent danger of bursting.  Cyclone Aila, which hit the Bay of Bengal in May, had a disastrous impact in Bhutan, impacting power and water supplies and damaging roads, bridges and other infrastructure.
Bhutan had always maintained that climate change needed to be addressed in the framework of sustainable development.  International efforts needed to move towards replacing unsustainable practices and creating a low-carbon economy with the use of renewable and energy-efficient technologies.  Bhutan would chair and host the sixteenth Summit of the South Asian Association for Regional Cooperation in April 2010, which would place climate change and the environment as its theme.
Bhutan believed reform of the United Nations, particularly the revitalization of the Assembly and reform of the Security Council, were very important.  It supported expansion of the permanent and non-permanent membership of the Council and backed India, Japan, Brazil, Germany and two countries from Africa as permanent members.
With the increasing frequency of severe natural calamities and their negative impact, there was a need for an institutionalized disaster preparedness and response mechanism at the national, regional and global levels.  The creation of the United Nations Central Emergency Response Fund (CERF) was an important step towards providing disaster relief urgently for lifesaving operations.   Bhutan had made a modest contribution to the Fund to show its support.  His delegation fully supported efforts to address the world’s common challenges.