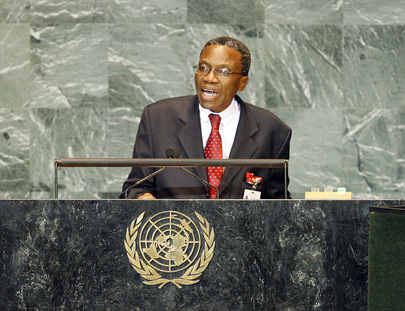 JEAN-MARIE EHOUZOU, Minister for Foreign Affairs of Benin, said the multifaceted economic crisis had been caused by an accelerated globalization without global economic governance.  The time for assumptions had passed and now was the time to restore the capacity of the United Nations to fulfil its vocation in its search for solutions to global problems.  The Dialogue among Civilizations was an essential precondition for strengthening multilateralism, and in order to reverse climate change, a new alliance between man and nature must be forged.  The Copenhagen Conference would offer an exceptional opportunity in that regard.
Describing several measures that his country had taken to combat marginalization and poverty, he said the Government was committed to combating female genital mutilation and establishing equal rights between men and women through a new family code.  Benin welcomed the establishment of a single United Nations system entity for the advancement of women.  Measures to combat poverty included the promotion of microfinance, youth training, mechanization in agriculture and promoting education.  However, economic recession and climate change jeopardized the success of those measures.
Benin suffered from coastal erosion due to rising sea level and drought, he said.  To combat coastal erosion, infrastructure projects were required at the subregional level, for which enormous resources had to be mobilized.  In that regard, he proposed the establishment of a multilateral investment fund under the aegis of the United Nations and the African Union.  There was a need for a United Nations with the moral authority to commit developed countries to reform the global financial architecture, while leading emerging countries to shoulder fully their international commitments while using their assets to promote South-South cooperation in order to attain the Millennium Development Goals.
He called for an Organization with strengthened capacity to contribute to ensure the peaceful settlement of disputes, including through mediation, that could settle the question of Palestine; promote disarmament and non-proliferation of weapons of mass destruction; promote the rule of law nationally and internationally; promote equitable trade; combat terrorism; and exercise the responsibility to protect.  In reforming the United Nations, expansion of the Security Council membership in both categories was an inescapable requirement.  There was also a need for an Organization that was more just and responsive to the urgent needs of the current times, as well as to the aspirations of the most vulnerable people on earth.