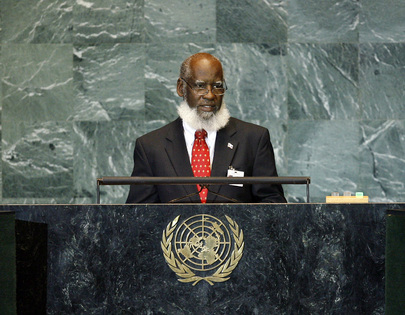 WILFRED ELRINGTON, Attorney General, Minister for Foreign Affairs and Foreign Trade of Belize, said that last week, his country had marked its twenty-eighth year of independence, but even amid that celebration, people had been concerned about the crises that were threatening to destroy the very planet that sustained all.  In the aftermath of the global economic crisis, Belize was experiencing declining levels of revenue, diminishing remittances and crushing debt servicing obligations, among other things.  It was also threatened by hurricanes and floods of greater intensity, damage to its great barrier reef because of warmer water, and illicit trafficking in drugs and arms.  The population was also being ravaged by HIV/AIDS.  All those crises had put the attainment of the Millennium Development Goals in real jeopardy, he said.
While Member States had endorsed the principle of sovereign equality, it was nourished more in breach than in observance.  He said the “club model” of multilateral cooperation -- centred around the five permanent Security Council members, the weighted voting in the International Monetary Fund (IMF) and the World Bank, and the proliferation of groupings such as the G-8 and the G-20 -- suffered from a crisis of legitimacy.  There was a need for a new framework of multilateral cooperation in which all nations could have meaningful input into the decision-making process on issues that had a direct impact on their interests. That required fundamental structural reform and not mere cursory efforts at technocratic coherence.
He said that Belize, a middle-income country, had made rapid strides in building up its international financial services industry.  In 2008, that industry had accounted for some 9 per cent of Belize’s GDP.  His country had also developed a regulatory framework and made commitments to the Organisation for Economic Cooperation and Development (OECD) to improve transparency.  At the same time, however, the G-20 had reactivated its harmful tax initiative and some members had called for complete annihilation of the industry.  A more equitable and effective way to address the issue of offshore financial services was through a mechanism for multilateral cooperation wherein all States participated on an equal footing.
Climate change presented the most serious threat to the country’s sustainable development and viability, he continued.  The urgency of a global response to that issue was inescapable.  Despite national and regional actions, global greenhouse gas emissions continued to increase.  A response must include an agreement to implement ambitious mitigation targets and increased support for adaptation.  As small island developing States were already being impacted by climate change, avoiding adverse effects on such particularly vulnerable countries should be the benchmark for determining targets and support levels.