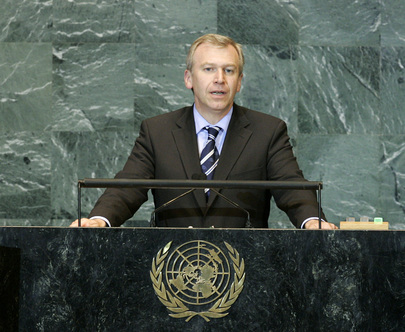 YVES LETERME, Minister for Foreign Affairs of Belgium, said that the impact of shared global challenges required a global response.  The United Nations, as the central figure in international affairs, however, needed to “earn its role”.  To this end, he called for a new multilateral commitment and restructuring of international institutions, so that rapid reform could be initiated in both the Security Council and the General Assembly.  Limited resources needed to be used more efficiently and a stricter management system needed to be implemented.  He also called for more budgetary accountability.

Elaborating on multilateral relations, he observed that although the multitude of regional and subregional organizations enhanced multilateral cooperation, it, at times, led to a lack of collaboration between the regional and the global institutions.  He also commented on “incomplete multilateralism” where Member States gathered on an informal basis to discuss international issues, and observed that these informal meetings had the potential to speed up decision-making within the formal settings.  However, he warned, they could not replace the international multilateral organizations.  “Rather than being exclusive, multilateralism should be inclusive and transparent,” he said.

He then spoke on the fact that millions of people were still being killed, maimed, and raped in violence in conflicts between and within Member States.  Stating that this was the first and foremost challenge to the international community, he reminded the General Assembly that without peace or security, there could be no sustainable development or fair distribution of resources around the world.  The United Nations Educational, Scientific and Cultural Organization (UNESCO) Constitution states “since wars begin in the minds of men, it is in the minds of men that the defences for peace must be constructed.”  To make this happen, he urged for the abolishment of all hate speeches that attacked the dignity of people, nations, communities or the rights of States to exist.

Turning to the issue of proliferation, he stressed that the arms control issue must be high on the international agenda and applauded the resolution adopted by the Security Council yesterday.  But, the recent news regarding Iran’s nuclear development activities illuminated that this goal was not shared by all.  Rather than risk being recipients of an international ban, he called upon both the Democratic People’s Republic of Korea and Iran to cooperate with the international community and to implement the Security Council’s resolutions.  Another pressing issue was anti-personnel mines, and he expressed hope that the 1999 Convention on the prohibition of these weapons would be strengthened in the upcoming review conference in Cartagena, Colombia.

An international legal order would only be effective if Member States governed by the rule of law.   In order to achieve just and fair globalization, the rule of law on both national and international levels needed to be strengthened.  “In the words of the former Secretary-General Kofi Annan:  There is no development without security, no security without development and both depend on the respect for human rights and the rule of law.”  And in order to meet the many global challenges of the vision of a just world, solid international institutions were needed.  Also needed were minds that were multilateral in their scope, and men with conviction were needed to lead these institutions.  That belief prompted him to announce his fellow countryman, Louis Michel, former Minister for Foreign Affairs of Belgium, as a candidate to chair the sixty-fifth session of the General Assembly.