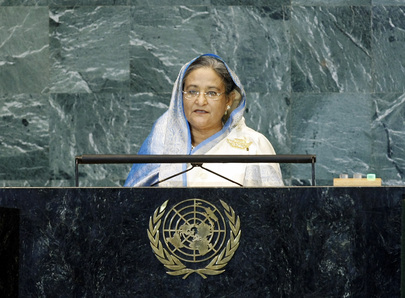 SHEIKH HASINA, Prime Minister of Bangladesh, recounted the country’s history of assassination and dictatorship and hailed the internationally recognized elections that brought her home from exile and brought democracy back to Bangladesh.  The resounding victory of her party, the Awami League, reflected the people’s preference for democratic ideals and secularism and a denial of all forms of extremism, she said, noting that the elections had witnessed record participation of young voters and women.

She said her country, despite all odds, was making strides in socio-economic development.  As a Government priority, education, particularly for girls, was receiving the single largest share of the annual budget.  The Government had pledged to ensure 100 per cent student enrolment at the primary level by 2010.  Bangladesh had successfully removed gender disparity in net enrolment of boys and girls in primary education, in accordance with the Millennium Development Goals, and was now planning to provide free tuition for girls up to degree level.  The Government was also providing food rations to poor primary school children in rural areas and aimed to achieve full literacy by 2014.

The Government also strove to make progress in the health sector, she said.  During the party’s last tenure (1996-2001), a national health policy that would ensure basic health care without discrimination, had been formulated.  A national strategy for maternal health had also been adopted, and there were also plans to reduce the infant mortality rate, to extend child immunizations and to reinstate an earlier programme to establish one community health-care centre for every 6,000 people.  She enumerated the many social safety nets already in place in Bangladesh, added to which was a current initiative to provide employment to at least one member of every family.  Over half of the budgetary resources were being allocated to reduce the poverty level from 45 per cent to 15 per cent by 2021.

Food security was of prime concern, she said.  During her Government’s earlier tenure, agricultural programmes had made Bangladesh self-sufficient in food, although that achievement had subsequently been lost.  Current Government food policy aimed to ensure sustained food security for all.  Bangladesh would also be seeking a global agreement for agricultural development and the attainment of food self-sufficiency in developing countries at the upcoming World Summit on Food Security in Rome.  Substantial contributions from developed countries, agreement on sustainable agricultural policies, technology transfer, equitable and fair trade rules for food and agricultural products with preferential treatment for least developed countries, and the removal of agricultural subsidies in the developed world would also be sought.

Bangladesh was one of the worst victims of climate change, although its contribution to the problem was negligible, she said.  Myriad natural disasters were interrupting agriculture and challenging water resources, health, energy, and urban planning, among other areas.  Countless lives had been lost and families uprooted by the thousands year-round, creating millions of climate change refugees.  According to scientific estimates, one in every seven people in Bangladesh would be a victim of climate change by 2050.  The dredging of all major rivers had been placed at the top of the adaptation agenda.  Some 14,000 cyclone shelters had already been built and more were on the way.  Although a Climate Change Trust Fund had been established domestically, international resources were needed to implement those projects.

Worldwide, the communities affected by climate change “would not only lose their homes, they would also stand to lose their identity, nationality, and their very existence and, in some cases, their countries”, she said.  For that reason it was critical that the outcome of the Copenhagen Conference in December provide assured, adequate and easily accessible funding for adaptation, as well as affordable, eco-friendly technology transfer to developing countries and commitments to deeper cuts in greenhouse gas emissions.  She welcomed Gordon Brown’s proposed fund to support adaptation and mitigation programmes in affected countries, as a potential start to the systematic flow of funds towards ameliorating adversely changing conditions around the globe.

She said that the economic recession came from years of negligence to economic equity and justice, including an unfair international financial structure that had not kept up with changing needs.  It was imperative to immediately restructure the global financial system.  The World Bank and the International Monetary Fund (IMF) must accommodate a stronger presence of developing countries, especially least developed countries.  Liberal trade concessions by developed countries could rescue those countries.  Early conclusion of the Doha Development Round also would be an important collective stimulus package for developing economies.  She called on the Organisation for Economic Cooperation and Development (OECD) countries to fulfil their official development assistance (ODA) commitment to developing countries.  Recovery measures should not adversely affect employment opportunities of immigrant workers from developing countries.

Noting that Bangladesh ranked second in providing personnel to peacekeeping operations and that the country had lost 84 peacekeepers, she said that it was not proportionately represented in the Department of Peacekeeping Operations and did not have a say in planning and strategies for peacekeeping missions.  That situation could be rectified by proportional representation.  She further noted that Bangladesh had been a founding member of the Peacebuilding Commission and had been contributing to peacebuilding activities ever since.  She declared her opposition to terrorism, and “categorically rejected claims to those who cloak themselves in the rhetoric of Islam, or any faith to justify violence”.