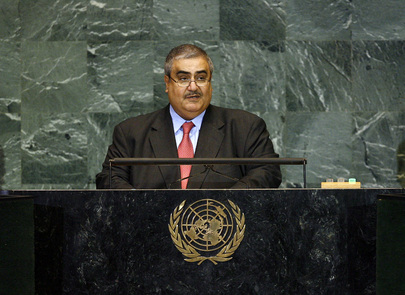 SHAIKH KHALID BIN AHMED BIN MOHAMED AL KHALIFA, Minister of Foreign Affairs of Bahrain, said the sixty-fourth session had convened at a time of rapid universal change that placed international relations at a critical juncture. People needed to exert greater efforts towards tolerance for others who did not necessarily share their values and ideas.  Common grounds of mutual understanding would help make the world more progressive and secure.  Today’s serious challenges required a broader global alliance of Member States and the support of the entire United Nations system in the interest of the international community.
Turning to the prolonged Arab-Israeli conflict, he said the Middle East peace process required greater political and diplomatic efforts to reach a two-State solution as part of a comprehensive and just settlement, based on equal security for all nations.  The failure to end that conflict was due to the lack of a methodology based on a balanced peace, as well as the conspicuous absence of a binding mechanism of implementation.
The Arab Peace Initiative unequivocally confirmed the Arab position that peace was a strategic and irreversible option, he continued.   Bahrain expected the international community, particularly the leading Powers, to exert pressure on Israel to conform to relevant international resolutions and the requirements of the Road Map and the Arab Peace Initiative.  This would include a freeze and dismantlement of all Israeli settlements created in the territories.
He commended the speech delivered last week by United States President Barack Obama, and said Bahrain considered it a term of reference for resumption of the Middle East peace process.  Nuclear proliferation in the Middle East and Gulf region was another concern, generated by the Iranian nuclear programme.  That issue should be addressed without creating the threat of confrontation.  Pursuant to Council resolution 1887 (2009), Bahrain reiterated its appeal to the international community to make the Middle East, including the Gulf region, a zone free of nuclear weapons and all weapons of mass destruction.
On other regional issues, Bahrain was concerned with the situation in Iraq and the need to preserve the country’s sovereignty and territorial integrity, and condemned all terrorist activities that destabilized its security and rekindled sectarian hatred.  In order to build confidence between the Gulf Cooperation Council and Iran, he said it was also imperative to settle the question of the occupied islands belonging to the United Arab Emirates, either through direct negotiations between the two parties or referral to the International Court of Justice.
Bahrain also reaffirmed the need for efforts to help Yemen, under the supervision of the United Nations, deal with its refugee problem and restore stability.  Preserving stability and unity in the Sudan was important, as was security in Somalia.  He said Bahrain reaffirmed its position supporting the sovereignty of Morocco over all its national territory and called on the international community to support the negotiations process initiated by the Council.