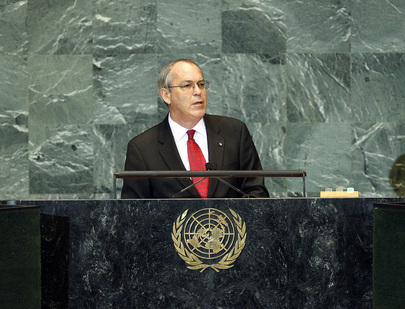 T. BRENT SYMONETTE, Deputy Prime Minister and Minister for Foreign Affairs of the Bahamas, said the global economic and financial crisis threatened to negate all that had been achieved on the development agenda, both at the national and international levels.  The fallout for the Bahamas, with tourism as its primary industry, had been considerable as the country was in the midst of one of the most difficult tourism seasons.  The Government had acted quickly to soften the impact of the crisis.  Among other things, it had ensured the continued integrity of the domestic financial system.  It was of critical importance to global financial health that actions taken at the national level were complemented by appropriate international responses.
As the Assembly would consider the scale of assessments this year, he reiterated his country’s position that per capita gross national income should not be given undue weight in determining “capacity to pay”, as it often lead to distortions.  The current scale for assessing peacekeeping operations placed the Bahamas, a small island developing State, in the same category as the most developed economies.  The gross national income criterion did not properly reflect either the vulnerability of the Bahamian economy or the extraordinary costs associated with the duplication of infrastructure required because of its archipelagic configuration.
He said climate change presented acute challenges for small island developing States, including the Bahamas, which had suffered from an increase in the number and ferocity of hurricanes.  Restoration and recovery efforts had diverted scarce resources from development programmes.  The Bahamas recognized that responsibility for climate change did not rest with developed countries alone and had taken a number of actions to increase its resilience vis-à-vis the adverse impacts of climate change.  However, environmental protection initiatives should not cause greater harm than good.  An air passenger levy would damage the already weakened tourism industry, and proposed marine bunkering levies were likely to impact negatively on the cost competitiveness of the Bahamas Maritime Registry.
The Bahamas faced particular challenges in the area of maritime safety and security, he said, adding that it had committed tremendous financial and technical resources to combat illicit trafficking in drugs and weapons, illegal, unreported and unregulated fishing, as well as human trafficking.  The country therefore needed effective cooperation and coordination with other States to resolve those issues and complement national efforts.  Illicit trafficking in narcotic drugs as well as small arms and light weapons were major contributors to increased criminality in the region.  A disproportionate amount of scarce budgetary resources was dedicated to fighting those crimes and dealing with the terrible fallout in Bahamian communities.
Turning to Haiti, a near neighbour, he said the Bahamas was committed to that country’s stabilization and political and economic development.  Short- and long-term development could not be achieved without sustained support from the international community.  Sharing the Secretary-General’s hope that Haiti was moving away from its history of conflict towards a future of peaceful and sustainable development, he called on the Security Council to extend the mandate of the United Nations Stabilization Mission in Haiti (MINUSTAH) beyond 15 October, and expressed hope that Special Envoy Bill Clinton would keep the issue at the forefront of international attention.