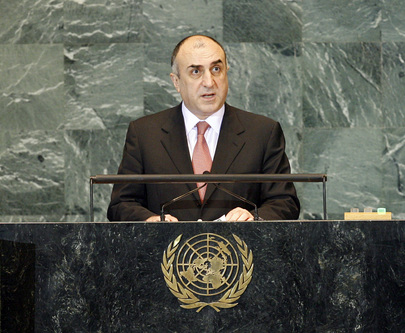 ELMAR MAMMADYAROV, Minister for Foreign Affairs of Azerbaijan, said that, unfortunately, the unlawful use of force had still not been removed from the context of international relations.  Today, civilian populations were still suffering from the manifest failure of individual States to fulfil their most basic responsibilities.  Governments failing to obey the rules of international conduct inevitably infringed upon individual liberties and freedoms at home, thus undermining democratic development.  The most vivid example of misconduct against the norms and principles of international law was the still unresolved Nagorny Karabakh conflict between Armenia and Azerbaijan.
As a result of Armenia’s aggression, almost one fifth of Azerbaijan’s territory had been occupied and some 1 million Azerbaijanis had become refugees and internally displaced persons, he said.  Four Security Council resolutions recognized Nagorny Karabakh as part of Azerbaijan, and called for the immediate and unconditional withdrawal of the occupying forces.  General Assembly resolution 62/243 expressed support for the sovereignty and territorial integrity of Azerbaijan, and the advocated a step-by-step approach to settling the conflict.
He said a number of important steps must be taken, starting with the withdrawal of Armenian forces from all occupied territories and the return of internally displaced persons to their homes.  That would pave the way for durable peace and stability in the region, which would be conducive to the elaboration of the legal status of Nagorny Karabakh within Azerbaijan, taking due account of the wishes of both Azeri and Armenian communities of the region.  Armenia’s acceptance of the step-by-step approach based on the decisions reflected in the Joint Declaration signed in Moscow in 2008 by the Presidents of Azerbaijan, Armenia and the Russian Federation was a positive sign.
Azerbaijan had minimized the impact of the global economic downturn and managed to sustain its growth, he said, adding that, since 2003, the poverty rate had dropped from 44 to 13 per cent.   The country’s modern energy infrastructure, coupled with vast energy resources, had transformed Azerbaijan into an energy hub of international importance and contributed to the development of neighbouring States.  Today was a time of heightened religious and ethnic awareness, which in certain instances was maliciously exploited to fuel conflicts on ethnic, religious or cultural grounds.  Azerbaijan supported fully the Secretary-General’s recommendations to remove hate messages, distortions, prejudice and negative bias from educational media and to ensure basic knowledge and understanding of the world’s main cultures and religions.  Azerbaijan had been among the first countries to join the Alliance of Civilizations initiative of Turkey and Spain.