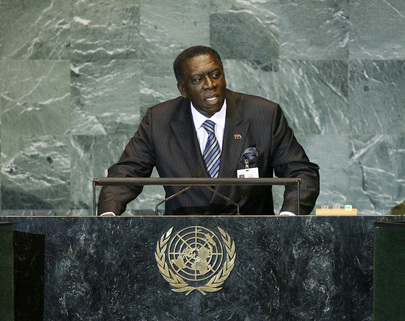 ASSUNÇÃO AFONSO DOS ANJOS, Minister of External Relations of Angola, said the economic and financial crisis had affected the growth of African economies by reducing the value of assets, and the retention of financial assets abroad.  The crisis had also led to a drop in the price of exported raw materials.  Efforts at trade liberalization were insufficient but welcome.  Also welcome were calls to reform the financial and economic regulatory institutions and to improve the fluidity and transparency of capital transfers to less developed countries.
Continuing, he also welcomed the various multilateral initiatives underway, including China-Africa cooperation, the Africa-South America Conference, the Tokyo International Conference on Africa’s Development (TICAD), the Europe-Africa Summit, the India-Africa Forum, the South Korea-Africa Summit, and, more recently, the Turkey-Africa Summit.  All those were of fundamental importance to development of the least developed countries, which included most countries in Africa, and Angola in particular.  The invitation for Angola to participate in the July G-8 Summit in Italy had been a testament to Angola’s encouraging economic growth.
In the short period between 2004 and 2007, Angola’s economy had grown by more than 92 per cent in real terms, he said.  Its gross domestic product had nearly doubled and the average annual real growth was nearly 18 per cent.  Public and private investments had increased sharply and had led to the creation of more jobs, among other positive developments.  Those achievements in so short a time filled the people with confidence in the future, he said.
Yet the promoting of peace and security were essential for the conditions of development and furthering of human rights.  Africa must continue to receive the Security Council’s support in combating drug trafficking, the illicit arms trade, piracy and terrorism.  Further, he said, conflict prevention and resolution measures could not be seen as separate from measures to combat organized and transnational crimes, the illegal exploitation of natural resources and illegal trade in small arms.
As a country that had chaired the Peacebuilding Commission, he said, Angola was particularly pleased to see progress in the peace processes of the Democratic Republic of the Congo, Burundi, Côte d’Ivoire, Liberia and Sierra Leone.  The inclusion of Guinea-Bissau in the Commission’s agenda had been very important.  Angola would continue working with the African Union and the United Nations in identifying lasting solutions for peace and national reconciliation processes.  The new format and functions of the Economic and Social Council were welcome.  The Security Council also must be reformed.  The Non-Proliferation Treaty and disarmament in general were of utmost importance.  The United Nations must be in a position to correct asymmetries and provide solutions to problems so that future generations would live according to a standard of living consistent with human dignity.