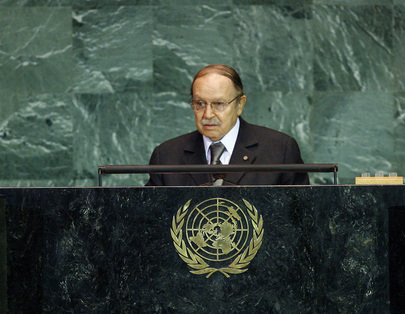 ABDELAZIZ BOUTEFLIKA, President of Algeria, said the global economic crisis was again at the centre of the Assembly’s debate.  It was only through an integrated, concerted approach to international relations that States could collectively surmount today’s problems and deal with the menace that weighed on peace and security.  Describing the current state of affairs, he called for ending opaque commercial and financial practices imposed in the name of free trade, and incoherence in the face of the crisis, seen most notably in the unfair treatment of developing nations.

In negotiations to conclude a treaty to replace the Kyoto Protocol, a spirit of compromise and solidarity was needed, particularly because developed countries had been motivated by narrow national interests.  He said such behaviour also had been seen on the issue of non-proliferation and disarmament, which had suffered from non-compliance of certain nuclear Powers, and in the fight against impunity.  The question of human rights was based on a selective approach, casting suspicion on efforts in that area.

He favoured measures that would strengthen existing structures to counter the financing of terrorism.  In that context, the African Union had launched an appeal, and he supported its efforts to make it concrete.  He hoped the United Nations would make progress on reform in the General Assembly, Security Council and Economic and Social Council.

Indeed, he continued, a revitalized Assembly would be able to find compromiseon Security Council reform.  Equitable representation in the Council was needed, in line with the demands of our time.  In addition, the preservation of peace, promotion of development and respect for human rights were necessary for building an Arab-Maghreb region that was stable and integrated.  The United Nations had supported Algeria in settlement of disputes in the Western Sahara, in line with the United Nations Charter, he added.

Continuing, he said Algeria was fully committed to Palestinians and their situation.  Indeed, the Middle East would not be able to achieve peace without a just and sustainable solution to that question.  Pressure must be brought to bear on Israel and its policy of aggression towards Palestinians.  Noting that Algeria had joined all African efforts to end obstacles to development, he said the African Union’s collaboration with the United Nations had led to reduced tension on the continent.  In closing, he reiterated his hope that international affairs be carried out in a manner that reinforced the multilateral system.