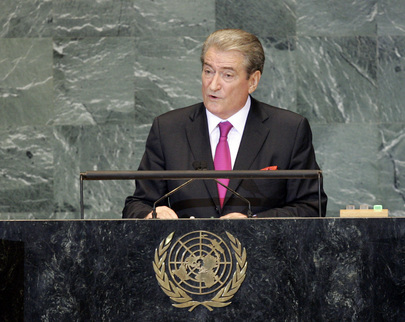 SALI BERISHA, Prime Minister of Albania, said his country and its people continued to engage international cooperation and were determined to offer their modest contribution in advancing peace and security and respect for human rights, fighting poverty, promoting sustainable development and prosperity, as well as protecting the environment.

As a European country, Albania remained fully committed and determined to carry out every reform and to take every decision and every other measure required for its membership into the European Union, he said.  The more than 94 per cent of Albanians supporting the country’s Union membership process was not only a strong encouragement, but also a major obligation on the Government to proceed quickly in that direction.  On the Millennium Development Goals, he observed that his country had put a lot of effort into achieving those Goals, to the extent that in the last three years, around 400,000 Albanians had come out of the poverty line, and extreme poverty had been reduced by 17 per cent; tens of thousands of new jobs had been created; the number of university students had doubled; and infant mortality had been reduced drastically.

Albania had maintained excellent cooperation with the United Nations and its agencies, having been one of the pilot countries for the “Delivering as One” initiative, he said.  Through its experience, it was making an important contribution to United Nations reform.  That project had an excellent track record in Albania, due to the coherence and better coordination for all United Nations activities.  He was pleased to report that the country’s reform priorities and national strategy on European integration was fully harmonized with the Millennium Development Goals and those of the “Delivering as One” effort.

On peace in the Balkans, he noted that the countries of the region were engaged in a process of cooperation in all fields and European and Euro-Atlantic integration.  He noted that last year, Albania and Croatia became full members of the North Atlantic Treaty Organization (NATO), and pointed out that other countries in the region had made significant progress towards European Union and NATO membership.  He stressed that the establishment of the independent state of Kosova, although only a small period of time had passed since its declaration of independence, had turned into an important factor of peace and stability in the Balkan peninsula.  The European Union’s sending of its Rule of Law Mission (EULEX) was providing precious help in consolidating the rule of law and functional democracy in Kosova, as well as in developing the best European standards of cooperation and coexistence of various ethnic communities.

Meanwhile, he continued, 62 countries of the United Nations had recognized the independence of Kosova, and the Republic of Kosova had become a member of the Bretton Wood institutions -- IMF and the World Bank.  To that end, he pointed out that all those countries that had recognized Kosova and the international institutions that had accepted it in their forums as a member state had done so because they were convinced that the independence of Kosova and its international recognition brought a major contribution to peace and stability in the Balkan region.  To that end, he called on those countries that had not done so yet to recognize the country’s independence, saying that doing so would be a clear signal of those countries’ will to contribute to the consolidation of peace, stability and security in the region.

A more efficient decision-making mechanism was pivotal in that respect, he added, noting that Albania supported efforts to reform the Security Council and believed that in order to meet the challenges of the twenty-first century, there was need for a Security Council that was efficient, transparent and legitimate in its decision-making process and where regions and individual Member States were adequately represented.