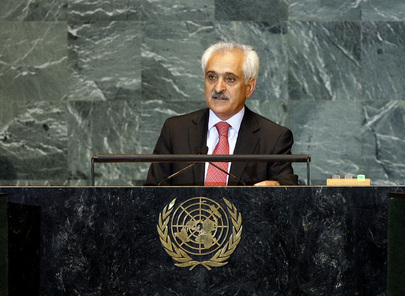 RANGIN DÂDFAR SPANTÂ, Minister for Foreign Affairs of Afghanistan, said the growing gap in prosperity between and within nations was a reminder that the world was still far from meeting the ideals of the United Nations Charter to create a just and secure society for all.  Restructuring United Nations agencies was pivotal in closing that gap.  “The United Nations is not a forum for lip service,” he said, adding that it must embody Charter ideals by providing political and moral leadership.  In an increasingly interdependent world, the Organization had to assume greater responsibility for finding collective solutions to global challenges.
Rather than just reacting to problems, the United Nations must find ways to address structural causes of the world’s problems and conflicts.  To those ends, there should be more cooperation between the United Nations, the International Criminal Court, international financial organizations and global civil society.  Efforts must be redoubled to resolving historical conflicts, the Middle East peace process chief among them, and Afghanistan reiterated its call for the full implementation of Security Council resolutions and regional initiatives for ending Palestinian suffering.
Turning to the Islamic world, he said that reviving the prominent role of Muslims in human progress could only be accomplished if they -- as members of the Islamic Ummah -- collectively confronted the current intellectual stagnation from which many suffered.  The Islamic world was in urgent need of an intellectual renaissance, and rising “Islamophobia” meant that nations must seek effective ways to confront racism and discrimination.
As to the situation in Afghanistan, he said negative media coverage had overshadowed many positive trends since the collapse of the Taliban regime.  In the last eight years, access to basic health services had risen from 9 per cent in 2001, to 85 per cent today.  The number of students had grown from 1 million students in 2001 -- all boys -- to nearly 7 million boys and girls by 2008.  Also, Afghanistan now had over 700 media outlets, often critical of the Government, versus only one State radio station and a few newspapers during the Taliban era.  He added that the average per capita GDP had grown from $185 in 2001 to $485 in 2008.
Regarding the presidential and provincial elections held last month, he said that poll had marked the first time in the country’s history that Afghan institutions had organized and conducted a nationwide election -- a test successfully passed.  Braving threats of Al-Qaida, the Taliban and other terrorist groups, voters had shown their desire to have a modern, democratic political system, while candidates transcended ethnic and religious lines.  No major violence had broken out between supporters, and the Independent Electoral Commission had successfully conducted voter registration, voting and counting.  Despite such efforts, lives had been lost in terrorist attacks.  The Independent Electoral Commission and United Nations-supported Election Complaint Commission were counting votes and addressing complaints.
There were irregularities, but “one should not assess a young terrorist-inflicted democracy with the criteria of stable, prosperous and centuries-old democracies”, he said.  While not condoning fraud, he urged being conscious of context.  In due course, the two electoral bodies would announce and certify final election results and it would be imperative for all to respect their decision.
Afghanistan faced significant challenges, he said, and chief among them was terrorism, which enjoyed institutional support “beyond our borders”.  As long as terrorist sanctuaries remained protected, Afghanistan, the region and the world would be at the mercy of their totalitarian ideology.  Narcotics, weak State institutions and unemployment were also problems.  With that, he urged pursuing a comprehensive strategy with a focus on security, good governance, economic development, regional cooperation and international solidarity.  He supported the United States new strategy for Afghanistan and Pakistan, and the new assessment that emphasized the need for a long-term strategy.
He said the Afghan Government’s new compact with the international community would be complemented by its new compact with the Afghan people.  Abandoning the nation would undermine the collective cooperation and, for many generations to come, the moral credibility of those who failed to honour their promises.  For its part, the Government was determined to take the lead in helping to realize Afghanis’ aspirations, placing good governance, mutual accountability and regional cooperation at the highest priority.  He was fully confident that, with international commitment, Afghanistan could overcome the legacy of decades of violence and suffering.