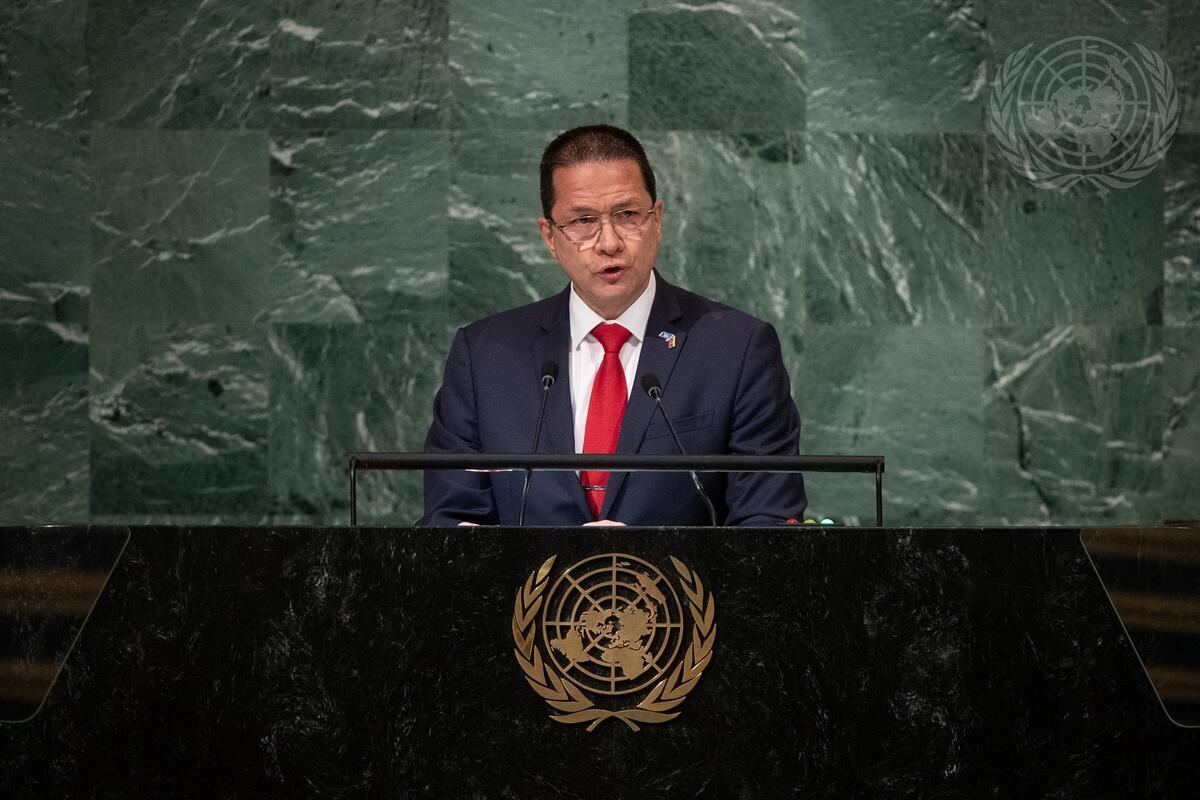 CARLOS FARÍA TORTOSA, Minister for Foreign Affairs of Venezuela, spoke against the campaign to discredit and stigmatize his country for challenging neoliberal globalization and its opposition to the modern version of colonialization.  The aim of this campaign, he elaborated, is to create political and economic conditions which prevent alternatives to capitalism’s imperialist and predatory system.  Accused of being a dictatorship and a failed State, Venezuela has experienced attempts to destabilize its democracy including assassination, invasion, seditious movements and a parallel government, 913 sanctions and the theft of its foreign assets.  Denouncing the sanctions as crimes against humanity, he proclaimed they “have never been able to break the will of our people”.  Such acts of piracy have, however, left a deep wound.  While political propaganda points to forced migration as an example, he noted that 60 per cent of Venezuela’s migrants return voluntarily because of exploitation, mistreatment and persecution in other countries.  Urging accountability over the “millions of resources that were supposed to be there to help Venezuelan migrants”, he called upon multilateral organizations to guarantee the rights of all migrants around the world and warned all of the outbreak of xenophobia, the rejection of the poor, hate crimes, hate speech and intolerance.

Instead of surrendering to the conditions imposed upon its people, Venezuela is working towards social peace and has implemented an economic plan to open up new sources of wealth through tourism, industrialization, entrepreneurship and farming development.  Expressing concern over the impact of various global conflicts on food security, he shared his country’s stance that the only way to overcome global hunger and poverty is through a return to sustainable agriculture.  Venezuela will help other countries and, as an Organization of the Petroleum Exporting Countries (OPEC) member, wants to assist in the current energy emergency.

Urging countries to prioritize diplomacy and dialogue over military confrontation, he pledged his country’s support for an international commission to facilitate dialogue between the Russian Federation and Ukraine.  Venezuela rejects all military provocation and economic sanctions against the Russian Federation and the hate campaign against the Slavic people.  He attributed the loss of trust in the international community to the United States’ 2001 invasion of Afghanistan and referenced the imperialism and supremacism which led to unnecessary bloodshed in Iraq, Haiti, Yemen, Somalia, Libya and Syria and continues to lay waste to international law.  Warning of the rise of a global security surveillance state which deprives citizens of privacy and turns democracies into “infocracies”, he called for the defence of truth and the application of reason and common sense as the antidote to collapse.  The North, he continued, “must recognize that the unipolar, colonialist system cannot adequately respond to the problems and needs that they themselves have created [in] harming humanity, animal life and the planet” and must accept new Powers and new leadership of China, the Russian Federation, India, Iran and Türkiye.  Venezuela hopes the Assembly recognizes and respects the peoples of the world, addresses the injustices against the Saharawi people and the Palestinian people, puts an end to illegal economic sanctions and political persecution against Nicaragua, Cuba, Iran and the Russian Federation and helps Argentina regain sovereignty over the Malvinas Islands*.