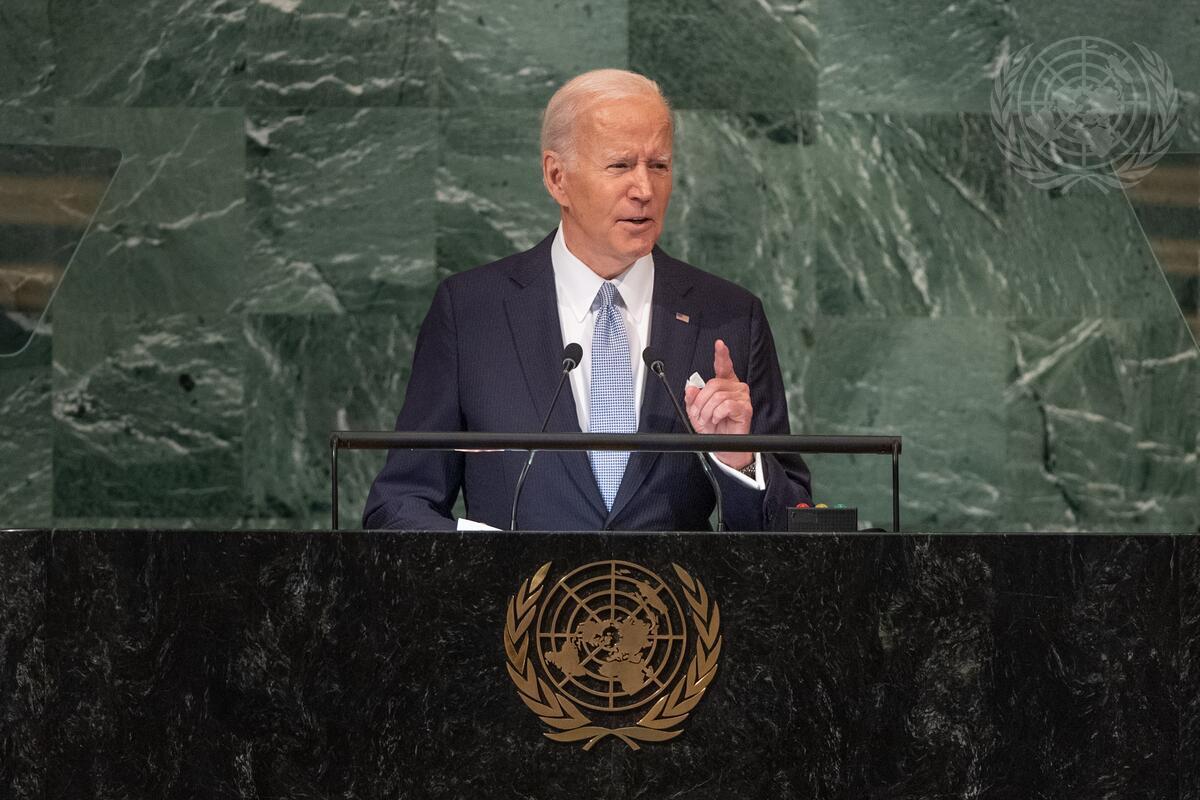 JOSEPH R. BIDEN, President of the United States, said in the last year, our world has experienced great upheaval.  Growing crisis and food insecurity, record heat, floods and droughts, COVID-19, inflation and a brutal needless war chosen by one man.  A permanent member of the Security Council invaded its neighbour and attempted to erase the sovereign State from the map, he cautioned, adding that the Russian Federation has shamelessly violated the core tenants of the Charter of the United Nations.  Just today, President Vladimir Putin has made nuclear threats against Europe in disregard to the non-proliferation regime; furthermore, the Russian Federation is calling up more soldiers to join the fight and the Kremlin is organizing sham referenda to try to annex parts of Ukraine.  Mr. Putin claims he had to act because his country was threatened; however, no one threatened the Russian Federation and no one other than Moscow sought conflict.  In fact, the United States warned it was coming.  Just before the invasion, Mr. Putin asserted that Ukraine was “created by the Russian Federation” and never had “real statehood”.  Spotlighting attacks on schools, railway stations, hospitals and centres of Ukrainian history and culture, he stressed that this war is about extinguishing Ukraine’s right to exist as a State.

Drawing attention to massive humanitarian aid and direct economic support his country provided to Ukraine, more than $25 billion to date, he highlighted that more than 40 countries have contributed billions to help Ukraine defend itself.  “We chose liberty.  We chose sovereignty.  We chose principles to which every party to the United Nations Charter is beholding.  We stood with Ukraine,” he asserted.  Ukraine has the same rights that belong to every sovereign nation, he said, rejecting the use of war to conquer nations and expand borders through bloodshed.

Calling for greater inclusiveness, he said members of the Security Council should defend the Charter and refrain from the use of veto except in extraordinary situations to ensure the organ remains credible and effective.  To this end, he expressed support for increasing the number of both permanent and non-permanent representatives of the Council, including permanent seats for countries in Africa, Latin America and the Caribbean.  The United States is opening an era of relentless diplomacy to address challenges such as tackling climate change, strengthening global health security and feeding the world.  On his climate agenda, he spotlighted rejoining the Paris Agreement, convening two major climate summits, helping get two thirds of the world’s gross domestic product (GDP) on track to limit warming to 1.5°C and now signing a historic piece of legislation that included the greatest climate commitment the United States has ever made:  $369 billion towards climate change.

Turning to global crises, he recalled much of Pakistan is still under water while the Horn of Africa faces unprecedented drought.  “This is the human cost of climate change and it is growing,” he said.  On global health, he commented that the United States delivered more than 620 million doses of COVID-19 vaccines to 116 countries around the world, all free of charge.  With 193 million people around the world experiencing acute food insecurity, he announced another $2.9 billion in support for lifesaving humanitarian and food security assistance for 2022 alone.  Meanwhile, he continued, the Russian Federation is pumping out lies trying to pin the blame for the food crisis on the sanctions imposed by many in the world for the aggression against Ukraine.  “Our sanctions explicitly allow Russia the ability to export food,” he stressed, adding only Moscow can end food insecurity.  “Nothing else matters if parents cannot feed their children,” he underscored, calling on all countries to refrain from banning food exports or hoarding grain while so many people are suffering.

He went on to underscore the commitment by the United States to work with every nation, including its competitors, to solve global problems like climate change.  Addressing the competition between the United States and China, he said his country does not seek conflict or a cold war.  Seeking to uphold peace and stability across the Taiwan Straits, the United States remains committed to its One China policy, which has helped prevent conflict for four decades, he said, adding that his country will continue to oppose unilateral changes in the status quo by either side.  He further urged a Venezuelan-led dialogue and a return to free and fair elections, expressed his support for Haiti as it faces politically-fuelled gang violence and an enormous human crisis and reiterated his commitment to continue to back the United Nations mediated truce in Yemen.  “A nuclear war cannot be won and must never be fought,” he asserted, voicing concern over disturbing trends introduced by the Russian Federation, Iran, the Democratic People’s Republic of Korea and China.  “China is conducting an unprecedented, concerning nuclear build-up without any transparency,” he said, stressing that the United States “will not allow Iran to acquire a nuclear weapon”.