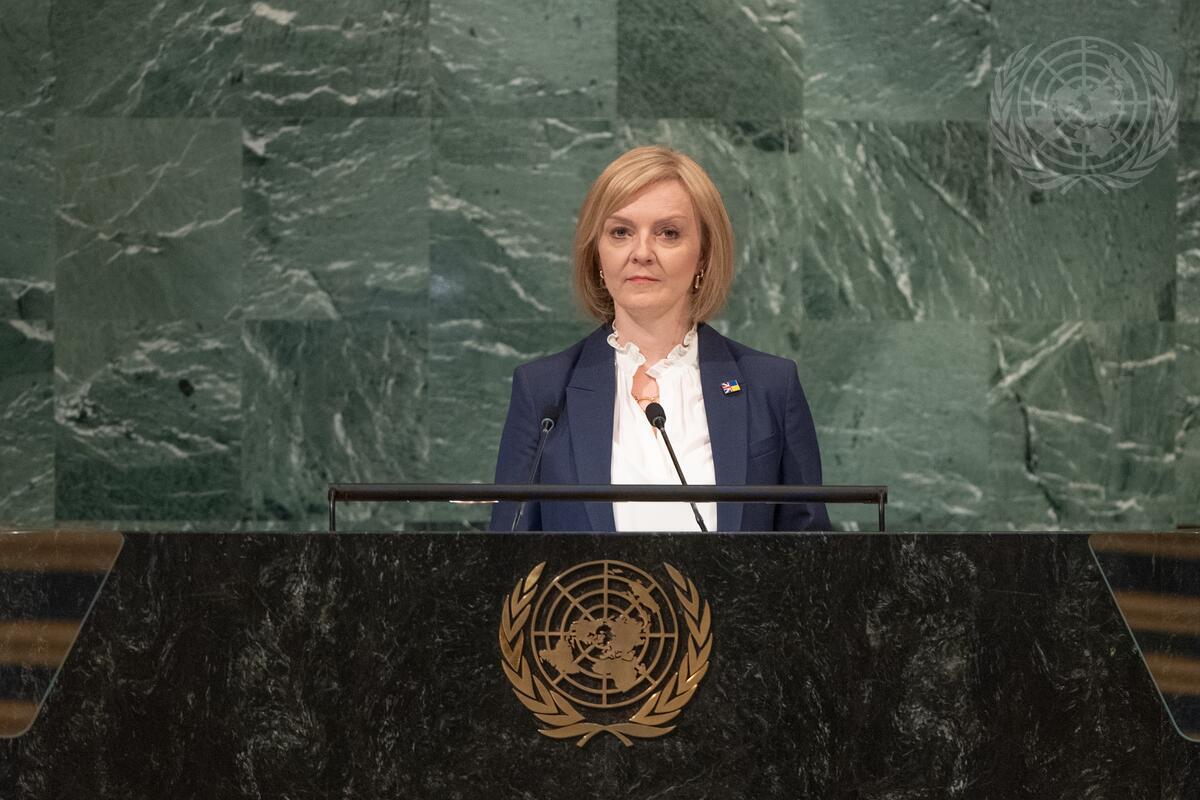 ELIZABETH TRUSS, Prime Minister and First Lord of the Treasury of the United Kingdom of Great Britain and Northern Ireland, noted the new era of geopolitics as “one that requires those who believe in the founding principles of the United Nations to stand up and be counted.”  In speaking also of the new era in the United Kingdom, she paid tribute to the service of Her Late Majesty Queen Elizabeth II and welcomed the new Carolean age under His Majesty King Charles III as one of hope and progress which defends the values of individual liberty, self-determination and equality before the law; ensures freedom and democracy prevail for all people and delivers on strong ideals through political will.

Attributing the strengthens of her nation to its foundations of freedom and democracy, she underscored the difference between democracies and autocracies, adding that “a country where Artificial Intelligence acts as judge and jury, where there are no human rights and no fundamental freedoms, is not the kind of place anybody truly wants to live. And it’s not the kind of world that we want to build.”  Acknowledging the struggle that exists, democratic societies, she warned, will fall behind unless they deliver on the economy and the security which citizens expect.  She expressed her determination to delivering on progress at home by growing and building a British economy which rewards enterprise and attracts investment, securing affordable and reliable supplies of energy through transitioning to a future of renewable and nuclear energy and safeguarding the security of its economy.  The free world must have economic strengthen and resilience to win in the new era of strategic competition against authoritarian aggression.

As countries must do this together, she recounted the efforts to build new partnerships around the world.  The United Kingdom has fortified its security alliances in Europe and beyond through NATO and the Joint Expeditionary Force, deepened links with democracies like India, Israel, Indonesia and South Africa, built new security ties with friends in the Indo-Pacific and the Gulf, demonstrated leadership on free and fair trade through agreements with Australia, New Zealand and Japan among others, acceded to the Trans-Pacific Partnership and strengthened partnerships like the Group of Seven (G7) and the Commonwealth of Nations.  In calling for the extension of friendship to the parts of the world which have been left behind and left vulnerable to global challenges, she offered the United Kingdom’s provision of funding and security capabilities as examples.

In applauding the resolute international response to Ukraine for its decisive collective action, she attributed its success to partnerships, alliances and the willingness to use new instruments:  sanctions, diplomatic action and rapid military support.  Urging the use of these instruments in a more systematic way to counter the economic aggression of authoritarian regimes, she said “the G7 and our like-minded partners should act as an economic NATO, collectively defending our prosperity.”  Citing the G7’s $600 billion Partnership for Global Infrastructure and Investment as an example, she called for more action on “friendshor[ing]” supply chains and ending strategic dependence to build collective security, strengthen resilience and safeguard freedom and democracy.

Promising “we will not rest until Ukraine prevails,” she committed 3 per cent of the United Kingdom’s GDP to defence by 2030 and pledged sustained if not increased military support for as long as needed.  At this decisive moment in history, she noted” “this must be a new era where we commit to ourselves, to our citizens, and this institution that we will do whatever it takes — whatever it takes to deliver for our people and defend our values.”