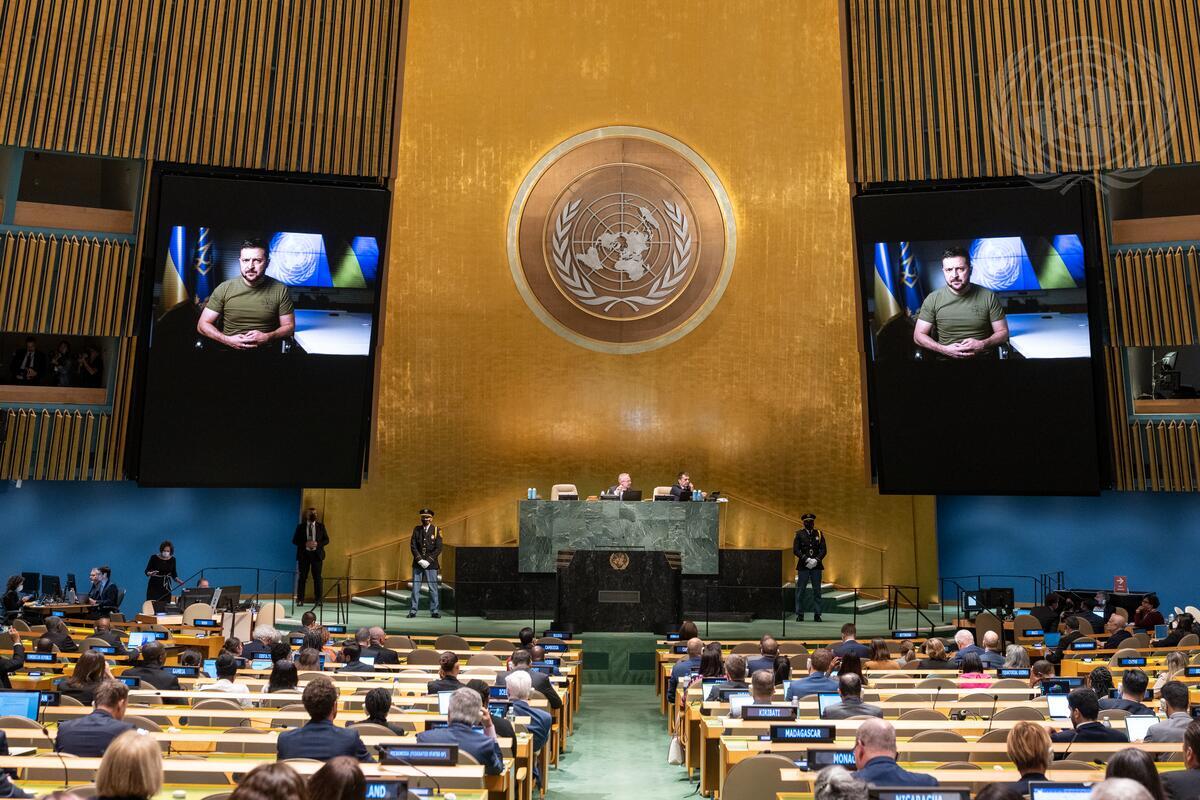 VOLODYMYR ZELENSKYY, President of Ukraine, addressing the Assembly via a pre-recorded video statement, underscored that:  “A crime has been committed against Ukraine, and we demand just punishment”.  The crime has been committed against Ukraine’s borders, the lives and dignity of its people and the values held by the community of States comprising the United Nations; therefore, Ukraine demands just punishment for its stolen territory, its murdered, tortured and humiliated people and the catastrophic turbulence that the Russian Federation has inflicted on Ukraine and the entire world with its illegal war.  Stressing that Ukraine, Europe and the world want peace, he said that there is only one entity “who would say now, if he could interrupt my speech, that he is happy with this war — his war”.  “We did not provoke this war,” he underlined, recalling that his administration held 88 rounds of talks in various formats to prevent it.  However, the Russian Federation — instead of ceasing its crimes of aggression that began in 2014 — decided on full-scale invasion.  Speaking as a State forced to defend itself, he outlined Ukraine’s “formula for peace”, which has five elements.

The first item of the peace formula, he said, is comprehensive punishment for the crime of aggression.  Sanctions against the aggressor form a part of this, as does isolating the aggressor within international institutions — especially those in which it is party to decision-making.  Further, a full package of personal restrictions should be applied to propogandists who seek to justify aggression, and citizens of the aggressor State should not be allowed to enjoy tourism or shopping in the territory of those who value peace.  Through visa restrictions, they will then be encouraged to oppose the aggression of their own State.  He also emphasized the need to create a special tribunal to punish the Russian Federation for its aggression against Ukraine, which will send a signal to all would-be aggressors that “they must value peace or be brought to responsibility by the world”.  Ukraine has prepared precise steps to establish such a tribunal, and will present them to all States, along with appealing to the General Assembly to support an international compensation mechanism to force the Russian Federation to pay for this war.

Protection of life is the second part, he noted, spotlighting it as “the most concrete item of the peace formula”.  While the General Assembly is speaking today, 445 bodies are being exhumed from a mass grave in the Ukrainian city of Izium, and the only difference between this and what the world saw in Bucha was the actual burial — the Russian army was in Izium for a longer time, and therefore buried the bodies, rather than scattering them on the street.  Underscoring the need to protect life against that backdrop, he said that every State suffering armed aggression needs the opportunity to protect life and liberate its territory, and whatever it needs to do so should be provided — be that materiel, finances or intelligence data.  He stressed that the Russian Federation wants to spend the winter preparing its forces for a new offensive — “for new Buchas, new Iziums” — and carrying out military mobilization at home.  “We cannot agree to a delayed war,” he said, calling for defensive support to liberate Ukrainian land — above all, air defence — along with financial support to maintain internal stability.

He went on to say that the third item of the peace formula is restoring security and territorial integrity, pointing out that the Russian Federation is undermining maritime, food, radiation and energy safety.  “None of you will find a vaccine against radiation sickness,” he stressed, underscoring that the Russian Federation’s “radiation blackmail” should concern everyone.  Further, the international community must respond to that country’s energy blackmail by capping the prices at which the Russian Federation is able to export its energy resources.  He urged that, after the Russian Federation’s missile terrorism, after the massacres, after Mariupol, after the burning of prisoners of war in Olenivka, after strikes on nuclear power plants, “we must finally recognize that Russia is a State sponsor of terrorism at all levels”.  The fourth element of the formula is security guarantees, and he emphasized that every nation has the right to such guarantees — not only the largest and most-fortunate.  The fifth, he said, is determination — “something without which the other four items will not work”, calling for the world to “unite around the one who fights against armed aggression and call to order the one who threatens all”.

“What is not in our formula is neutrality,” he said, stressing that those who speak of neutrality when human values and peace are under attack “mean something else”.  Sympathizing only for protocol’s sake creates the conditions of war, and this must be corrected to create the conditions for peace.  “Mankind and international law are stronger than one terrorist State,” he urged, stating that the Russian Federation will be forced to end this war that it has started.  However, any settlement must be based on the Ukrainian peace formula.  He noted that, if his words today are followed by new Russian missile strikes or acts of terrorism, then this will only prove the Russian Federation’s weakness and the need to implement the five elements of the Ukrainian peace formula as soon as possible.  “We are ready for peace, but true, honest and fair peace,” he said, “and that is why the world is on our side”.  Also thanking the 101 countries that voted in favour of allowing his video address today — which was not only a vote about format, but also about principles — he pointed out that only seven “responded to principles with a red button” and that these numbers mean that peace will prevail over any aggression.