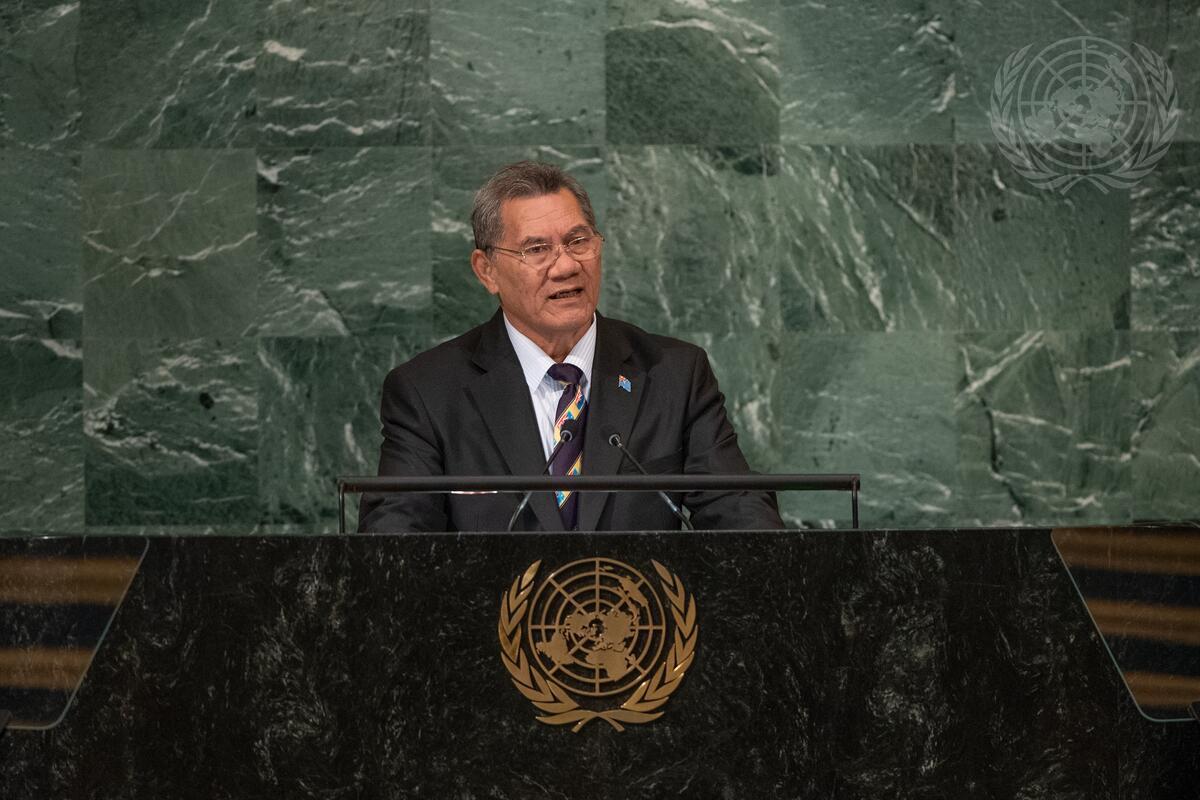 KAUSEA NATANO, Prime Minister of Tuvalu, said that it was regrettable that the Republic of China (Taiwan), with its notable partnerships on a wide range of development issues, continued to be kept out of the United Nations system, and supported its readmission into the Organization, asking not to sideline the country.  He also defined regrettable the ongoing economic blockade of Cuba.  Further, he expressed the region’s strong concerns of the potential threat of nuclear contamination to the health and security of the Blue Pacific and emphasized that the United Nations decolonization process is critical to the protection of human rights.

“Climate change and its consequential sea level rise, remains the single greatest existential threat my country faces,” he affirmed, underscoring the urgency to reduce greenhouse gas emissions.  Citing the Intergovernmental Panel on Climate Change report issued last year and its warning that at current global warming trends the international community is destined to miss the Paris Agreement target of limiting global temperature rise to 1.5°C, he added:  “This clearly means that Tuvalu will be totally submerged within this century”.  Tuvalu could become uninhabitable in the next two to three decades.  While other Pacific islands may have a few decades longer, they all face “the near certainty of terminal inundation”, though their carbon emissions combined amount to less than 0.03 per cent of the world’s total.  “The existential threat we face is not of our making, but it will remake us,” he stressed.  “Tuvalu is an acid test of leadership; because if the international community allow an entire country to disappear from climate change, what hope will be possible for anyone else?”

In many places, water security is severely compromised, he said, pointing out that a rising ocean brings increasing storm frequency, intensity and devastation, and it compromises food security.  As the ocean warms and acidifies, the precious coral that supports the region’s tourism and nurtures its fish-stock perish and the cost of eking out an existence increases, pushing citizens to leave and the nation becomes increasingly inchoate.  “This is how a Pacific atoll dies.  This is how our islands will cease to exist.  This is not about some future scenario.  It is what we are living with now,” he said, stressing that there was still space for intervention and that collective inaction would make these sovereign countries uninhabitable.

Current international instruments such as the Convention on Statelessness, the United Nations efforts to address climate change, including the twenty-sixth session of the Conference of the Parties to the United Nations Framework Convention on Climate Change, “say nothing” on the looming uninhabitability of these States.  On 22 September, Tuvalu and the Marshall Islands launched the Rising Nations Initiative to foster awareness, legal framework and political commitment.  Stressing that “this is about sovereignty, dignity, and integrity”, he underlined the need for a global settlement to guarantee the permanent existence of island States, which must co-create and enact it together.

Such a settlement includes the protection of the island States’ rights to their land and ocean, safeguards their heritage and the relocation of its people.  “We do not seek to move out of our homeland.  We seek fair and amicable treatment of displaced people so we do not become a burden,” he added, asking they be not “fobbed off with a wasteland”.  While Tuvalu can continue to support itself economically, “a situation globally caused must also have a globally just and equitable solution”, he concluded, stressing that through no fault of their own, the Pacific peoples would soon have to abandon the oceans and urging for generosity of spirit, support, and justice that recognized their reality and grave concern on the potential eradication of their atoll nations.