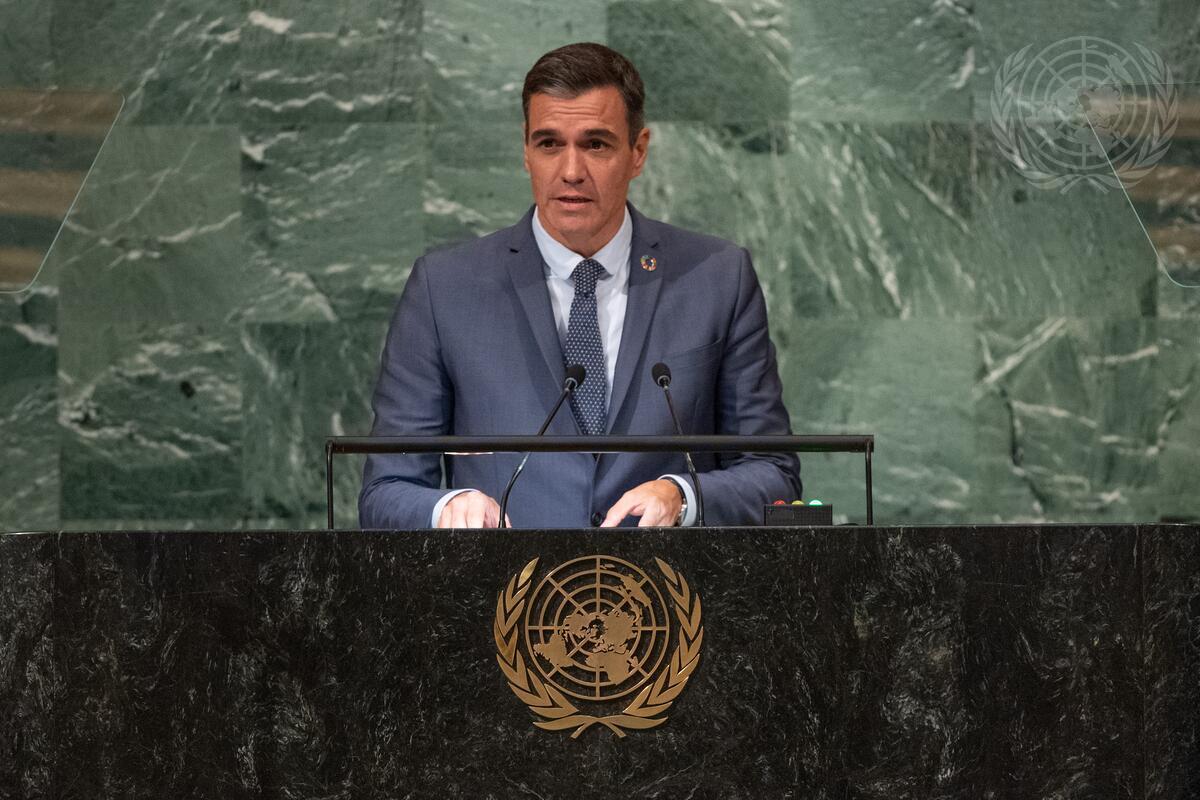 PEDRO SÁNCHEZ PÉREZ-CASTEJÓN, President of Spain, noting that the Organization’s foundations have rarely been shaken as strongly “as in the early hours of 24 February when cities throughout Ukraine felt the terror of Russian bombardment”, said that now — more than six months later — the world still witnesses the horror of an invasion “that takes us back to times we believed we had left behind in Europe”.  He condemned the announcement of annexation referendums in the occupied territories of Donetsk, Luhansk and Kherson, which would constitute a new violation of international law by Russian President Vladimir Putin.  Pointing out that the war’s economic and social consequences threaten global prosperity, he said that a food crisis is unfolding – together with an energy crisis provoked by an autocrat who will stop at nothing to stay in power – that threaten to leave the world’s poorest even poorer.  “It is not hard to understand why many people feel that they have had enough,” he said, but underlined his trust in the international community to overcome any adversity and his confidence in the strength of the United Nations to address global challenges.

Urging the international community to learn from its fight against the COVID-19 pandemic, he said that — while the development of a vaccine represented the “triumph of the human spirit over adversity” — there is an outrageous degree of inequality in access to it.  For its part, Spain will be a part of the solution to global health challenges by contributing €15 million to the World Bank’s Financial Intermediary Fund for Pandemic Prevention, Preparedness and Response, and will also allocate more than €237 million of its ODA to health-related issues.  It will also mobilize €151 million in donations — and further €85 million in loans — over the next three years to address the food crisis, which has been heightened by the Russian Federation’s blockade of grain exports from Ukraine and by selfish decisions to erect barriers to trade in agricultural products and fertilizers.  Through these efforts, Spain is committed to combatting poverty and inequality around the world, and he further noted that his country will allocate 0.7 per cent of its gross national income to ODA by 2030.

He went on to say that the current energy crisis required investment in sustainable energy and energy independence, not only to respond to climate change, but also to prevent countries from using their energy resources as a weapon of war.  On that point, he said that “the Putin regime believes that it has the right to blackmail the entire planet”, stoking inflation and jeopardizing economic recovery from the pandemic.  For its part, Spain has promoted far-reaching regulatory reforms to reduce the impact of rising gas prices, and it also worked to overhaul the electricity sector throughout the European Union, limiting and distributing the costs and benefits of price increases more fairly.  Turning to the digital transformation and its impact on the future of education and employment, he said that his country would play a leading role in this sphere too, by hosting the United Nations technology centre for the digitalization of education in Barcelona.  Further advances in human rights require supporting the right to education for all, but especially for girls, because school is where the path towards gender equality and empowerment starts.

On that topic, he pointed out that global threats to women’s sexual and reproductive freedom were yet another example of how slowly the world is moving towards guaranteeing full equality.  Worse still is the fragility of past social gains, he stressed, noting that they have fallen victim to backsliding in certain advanced democracies.  For its part, Spain has enacted legislation that will help ensure that its public-health service continues to meet women’s health needs throughout the country.  It will also contribute €100 million over the next three years to organizations working for gender equality, especially in the area of reproductive and sexual rights.  Inviting those present to look at images from past decades, he pointed out the “inexcusable discrepancy” between the presence of women in family photographs and their absence from public images, reflecting the political and economic realities of those times.  While great progress has been made in gender equality, much remains to be done and nothing is guaranteed.  On that point, he spotlighted the Taliban’s recent return to power in Afghanistan.

Recalling a recent visit to Bogotá, he went on to stress that the countries of Latin America and the Caribbean have a fundamental role to play in the world and, to that end, Spain will work to tighten relations between the region and the European Union during its presidency of the Council of the European Union in the second half of 2023.  Stressing the need to “leave behind the conflicts of the past century”, he supported a mutually acceptable political solution for the Western Sahara and said his country will continue its support to the Sahrawi population as the main international donor of humanitarian assistance in this context.  He also expressed hope that the European Union and the United Kingdom will soon reach an agreement in relation to Gibraltar, which must respect Spain’s legal position with regards to the sovereignty and jurisdiction thereof.  Adding that humanity will always find a way to overcome the blows it is dealt and move forward, he stressed that what mattered was “how we heal the wounds inflicted upon us along the way, while at the same time protecting the most vulnerable”.