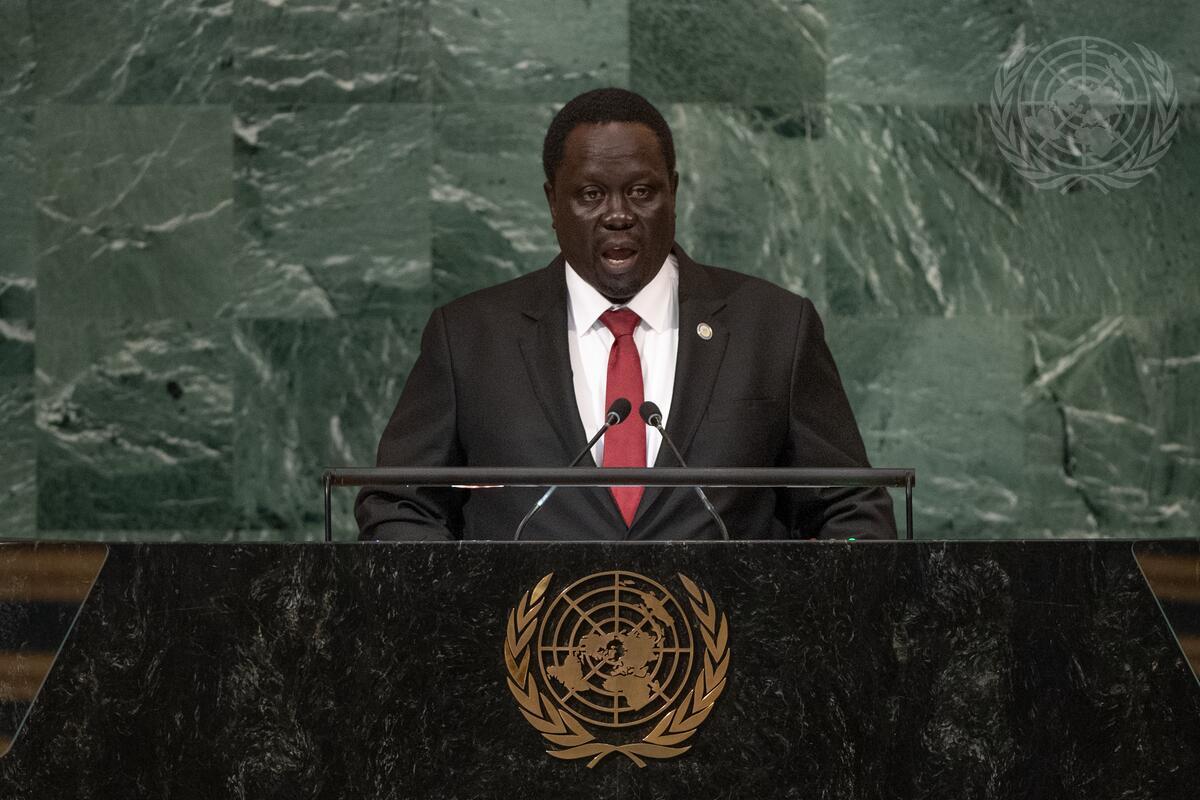 HUSSEIN ABDELBAGI AKOL AGANY, Vice-President of South Sudan, speaking on behalf of South Sudan President Salva Kiir Mayardit, said the Revitalized Peace Agreement signed on 12 September 2018 between the Government and opposition groups ended the internal conflict in South Sudan.  The parties are committed to implement the peace accord, which has improved the country’s security.  The Government is working to resettle internally displaced persons and refugees are now returning to their homes.  The command structure of the National Unified Forces has been established, which is a major leap towards transformation and regularization of the forces.  Since the unification of the command structure in April 2022, there has been a de-escalation in clashes between the South Sudan Peoples’ Defence Forces and the Sudan People's Liberation Movement-in-Opposition.  In addition, the first batch of 53,000 National Unified Forces successfully graduated on 30 August 2022 and parties to the peace accord have agreed on a roadmap to complete the agreement’s remaining tasks.  This will pave the way for free, fair, and credible election at the end of the transitional period.

With targeted actions, South Sudan has contained the spread of COVID-19 and as of 9 May 2022, it had only 17,513 confirmed cases, including 138 deaths since the pandemic’s start, he said.  The current vaccination campaign is effective, with 45 per cent of the entire population over the age of 18 vaccinated.  South Sudan ratified the Paris Agreement on climate change in April 2016 and is coping by building nature-based solutions, green infrastructure and fostering socioeconomic recovery.  The impacts of climate change and global warming are real in South Sudan.  For example, more than 70 per cent to 80 per cent of the country has been impacted by floods over the last three years.  Food insecurity is another issue and between February to March 2022, about 6.83 million people, or 55.3 per cent of the population, were facing acute food insecurity.

Surrounded by countries afflicted by conflict, South Sudan is working to promote peace and stability in the region and has successfully mediated the armed conflict in Sudan, which led to the signing of Juba Peace Agreement in 2020.  South Sudan stands ready to mediate the current conflict between the army and the Forces of Freedom and Change in Sudan, so that Sudan can finally enjoy lasting peace, he said.

Recently, South Sudan offered to mediate tensions between Egypt and Ethiopia over their disagreement on the construction of the Grand Ethiopian Renaissance Dam, he continued.  By promoting regional peace and stability, South Sudan has shown it is a reliable partner in that regard.  The current war between the Russian Federation and Ukraine is very unfortunate, devastating to the citizens of both countries and beyond, while leading to severe humanitarian crises.  “From the moral point of view, South Sudan Government is calling on Russia and Ukraine to cease all forms of hostilities and resolve the dispute through diplomatic and constructive dialogue to avert further consequences,” he said.