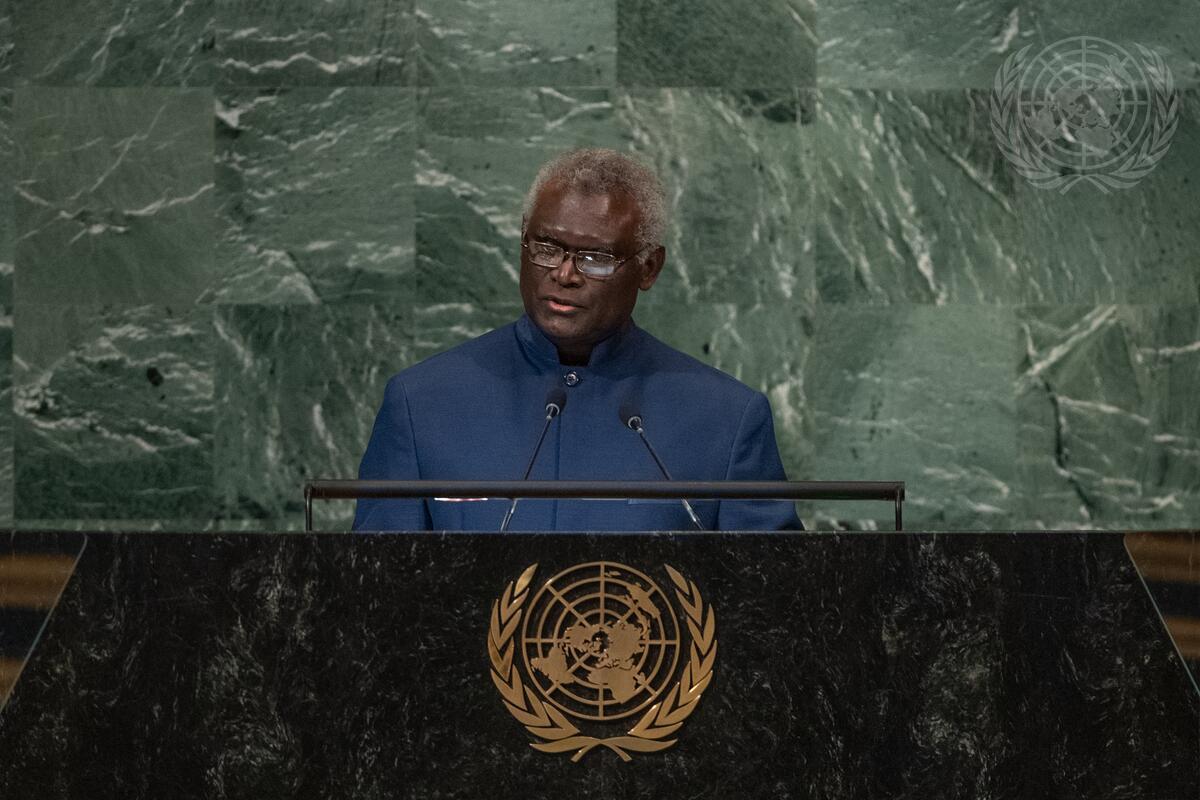 MANASSEH SOGAVARE, Prime Minister of the Solomon Islands, recalled that the right to establish diplomatic relations between sovereign nations is a universal principle shared by all members of the United Nations.  He expressed his concern over “a barrage of unwarranted and misplaced criticisms, misinformation and intimidation” that his country was subject to as it formalized diplomatic relations with China.  “Our decision to establish relationship with the People’s Republic of China is consistent with United Nations 1971 Resolution 2758”, he said, reiterating a call for respect of his country’s sovereignty and democracy.  “We will not align ourselves with any external Power or security architecture that targets ours or any other sovereign country or threatens regional and international peace,” he underscored.

Furthermore, he noted that his country joins others in the Blue Pacific continent, who signed the Rarotonga Treaty, to maintain a nuclear-free Pacific.  He then encouraged nuclear power States, signatories of the Treaty, to ratify it, reiterating a call for the total elimination of nuclear material, nuclear weapons and atomic-powered military assets in the Blue Pacific.  He echoed concerns expressed by other Pacific countries on the proposal of Japan to discharge nuclear water treated by the Advanced Liquid Processing System from the Fukushima Daiichi Nuclear Power Plant into the ocean, stressing on potential transboundary and intergenerational implications of such action.

Speaking about maritime boundaries and the United Convention on the Law of the Sea (UNCLOS), he informed the Assembly that his country has legally formalized the delimitation of all five of its maritime boundaries with Australia, Papua New Guinea, Vanuatu, France, and Fiji.  “With the completion of all five maritime boundaries, our rights and obligations are protected under UNCLOS in perpetuity,” he said.  He went on speaking about his country embarking on the ‘digital transformation journey’ to enhance and modernize its telecommunication infrastructure.  “Together with Australia and Papua New Guinea, the Solomon Islands commissioned its first submarine cable in 2019,” he underscored.  The geographical reach of the cable will be expanded with the installation of about 170 telecommunication towers under a Belt and Road Initiative.  This will link 80 per cent of the country and provide its rural population with access to reliable, accessible and affordable telecommunication services.

“For least developing countries like the Solomon Islands, vulnerability is a key hindrance to sustainable development,” he said, referring to inadequacy of indicators to measure vulnerability.  He thus called on all States and partners to support the development and adoption of a multidimensional vulnerability index.  “Pacific Island countries including the Solomon Islands are in a constant mode of recovery from disasters,” he said, calling on the establishment of global financial mechanisms for disaster recovery to provide support to the most vulnerable countries.  Considering these challenges, the Pacific region has declared a ‘state of climate emergency’.  “Sadly, we are seeing more resources spent on wars than in combating climate change,” he lamented.