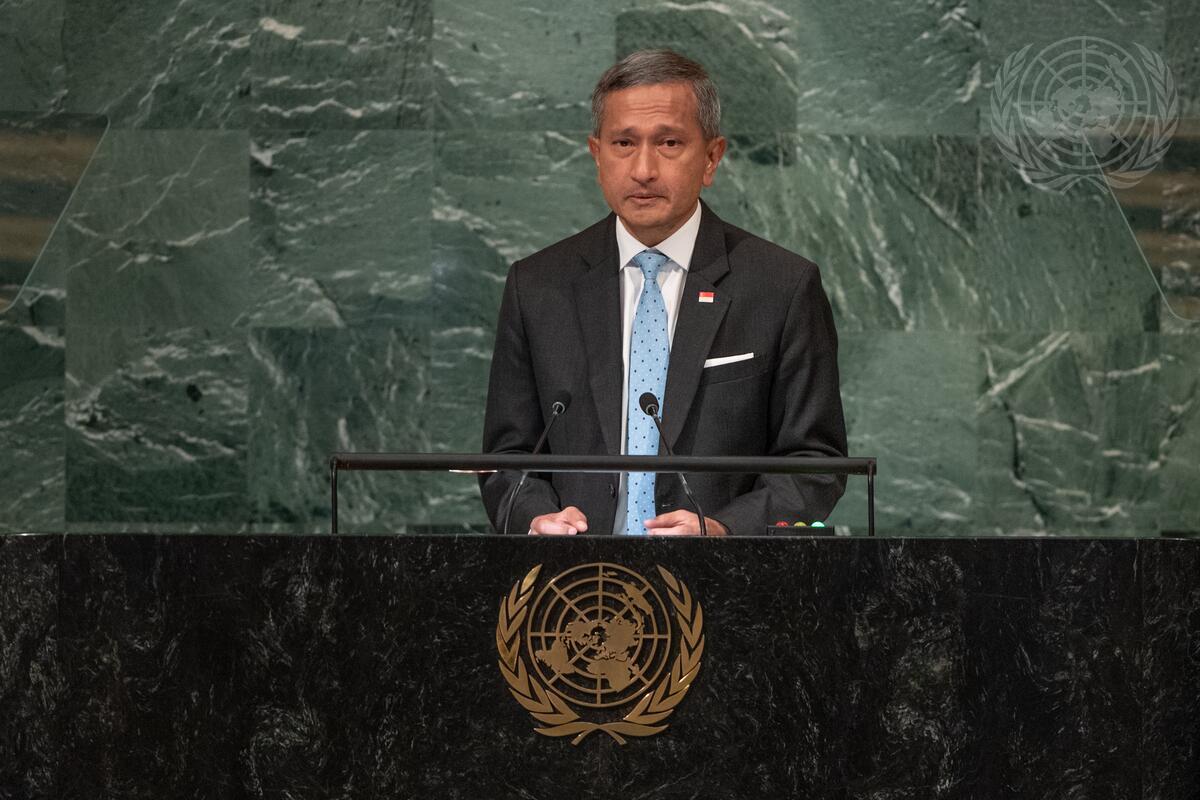 VIVIAN BALAKRISHNAN, Minister for Foreign Affairs of Singapore, stressing that the Russian Federation’s invasion of Ukraine flagrantly violates international law and undermines the rules-based order, said he is deeply concerned about  the potential annexation of more Ukrainian territory.  The multilateral global system is being severely tested and the temptation for unilateralism has become stronger:  “The need for global cooperation in the face of transnational challenges has never been greater or more urgent,” he stressed.  An uneven and fragile recovery from COVID-19, prolonged inflation, increased interest rates and energy prices, disruption and polarization demonstrate that without cohesion, trust or even an ability to agree on facts, the unity needed for societies to confront such challenges will be undermined.  Moreover, the climate crisis is a clear and present threat. “The post-World War II era of relative stability and prosperity has come to an end,” he said, stressing that the only way forward is to uphold the inclusive and rules-based multilateral system.  He pointed to his country’s contributions to that goal, including the establishment of the Forum of Small States, which now comprises 108 countries.

Global security depends on upholding the fundamental principles of sovereignty and territorial integrity, he said, stressing that small States in particular cannot allow the world to regress to one where “might is right.  He used the example of the adoption of the United Nations Convention on the Law of the Sea — which brough order and predictability to ocean governance — to show that, while not perfect, the multilateral system is the best option for addressing transnational challenges and managing global commons.  Commending the Secretary-General’s ambitious plan Our Common Agenda, he pointed to areas where building resilience in urgently needed.  Calling for a sustained, ambitious response and continued commitment to the Paris Agreement and Glasgow Climate Pact, he said that Singapore — a small, low-lying and alternative energy disadvantaged island nation — is especially vulnerable to climate change and sea-level rise.  However, Singapore takes its climate change action obligations seriously and has raised its climate ambition to achieve net zero by or around mid-century and is devising a comprehensive strategy to green the economy.

Turning to global health and pandemic preparedness, he stressed the need to build a more robust global health architecture to protect future generations and said Singapore will continue supporting the COVAX facility and the World Bank’s financial intermediary fund for pandemic prevention, preparedness and response.  He underscored that the world needs an open and inclusive global framework to harness and optimize the opportunities of digital transformation, while effectively addressing its challenges — including ensuring that small States and developing and least developed countries benefit.  In that vein, he voiced support for the Secretary-General’s Global Digital Compact proposal and noted Singapore’s Permanent Representative to the United Nations chairs the Open-Ended Working Group on security and the use of information and communications technology (ICT).  The consensus adoption of the Working Group’s first report is a welcome sign that multilateralism can still deliver meaningful progress on the global commons.