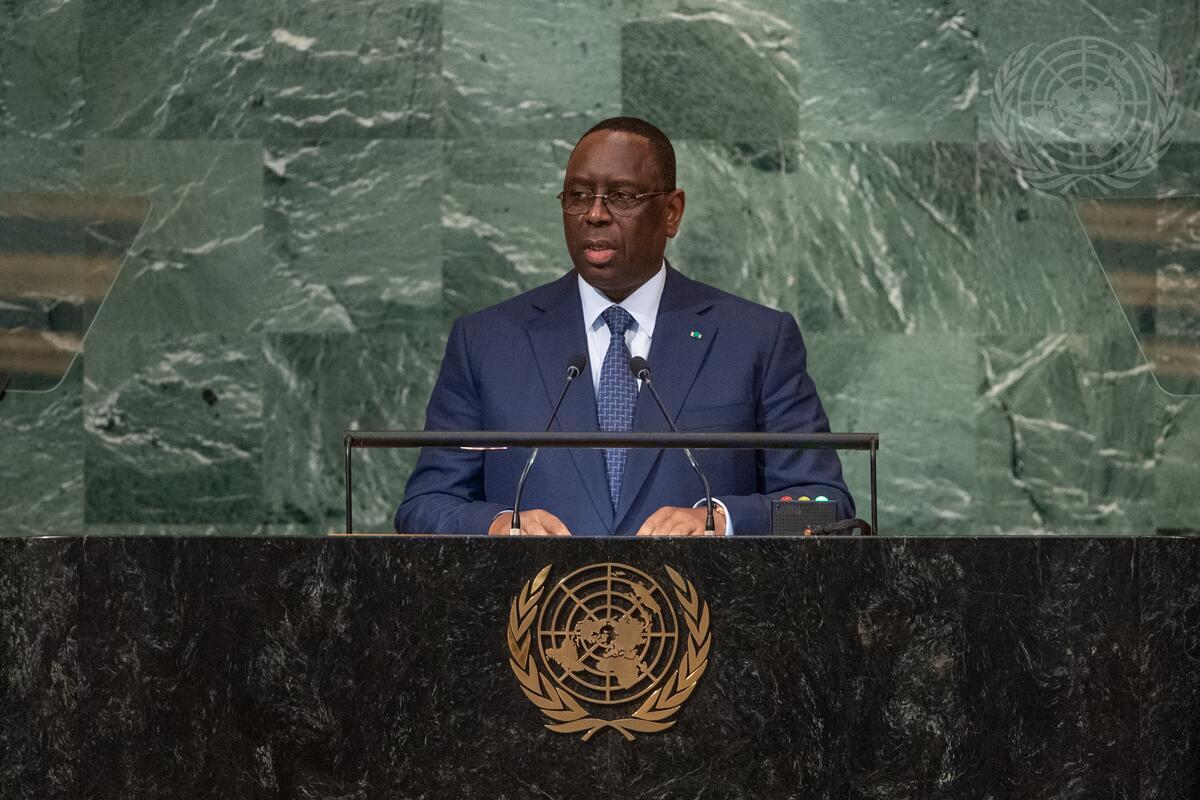 MACKY SALL, President of Senegal and of Chairperson of the African Union, said the Security Council must ensure all threats to international peace and stability, including in Africa, are handled in the same way.  “Terrorism, which is gaining ground on the continent, is not just an African matter.  It is a global threat that falls under the primary responsibility of the Council as the guarantor of the collective security mechanism, under the Organization’s Charter,” he underscored.  He urged the Council to engage more with the continent in the fight against terrorism in Africa and with more appropriate mandates and more substantial resources.

The African Union calls for the lifting of foreign sanctions against Zimbabwe, he said, noting that those measures continue to fuel a sense of injustice against an entire people and aggravate suffering.  He underscored the right of the Palestinian people in the Middle East to a viable State, living side by side with Israel, each within secure and internationally recognized borders.  He also called for a de-escalation and cessation of hostilities in Ukraine, for a negotiated solution, to avoid the catastrophic risk of a potentially global conflict.  He launched an appeal to put together a high-level mediation mission to which the Union stands ready to contribute.

“It is time for a fairer, more inclusive global governance that is more adapted to the realities of our time.  It is time to overcome the reticence and deconstruct the narratives that persist in confining Africa to the margins of decision-making circles,” he continued.  He urged the international community to heed Africa’s just and legitimate demand for Security Council reform as reflected in the Ezulwini Consensus.  He further reiterated the bloc’s request for a seat in the Group of 20, “so that Africa can, finally be represented where decisions that affect 1.4 billion Africans are being taken”.

On economic and financial governance, he said the 2022 Report on Financing for Sustainable Development, produced by some 60 multilateral institutions, including the International Monetary Fund (IMF), World Bank and the Basel Committee on Banking Supervision, points to shortcomings in the rating processes of credit rating agencies.  Voicing concern that the perception of risk in Africa continues to be higher than the actual risk, he called on the Global Crisis Response Group on Food, Energy and Finance to engage in a constructive dialogue with Group of 20, IMF and the World Bank, on improving the rating agencies’ working and assessment methods.  He further called for the partial reallocation of special drawing rights, much needed for developing countries, and implementation of the Group of 20 Debt Service Suspension Initiative.

Turning to health emergencies, he urged the mobilization of the Rays of Hope campaign of the International Atomic Energy Agency (IAEA) to strengthen the capacity of member countries, particularly in Africa, to fight cancer through nuclear technologies such as medical imaging, nuclear medicine and radiotherapy.  On climate change and energy, he pointed out that today more than 600 million Africans still live without electricity, calling on Member States to work towards the goal of mobilizing $100 billion per year to support the adaptation efforts of developing countries.  The “Africa of solutions” wants to engage with all its partners in a reinvented relationship with an open multilateralism system that is respectful of differences, so that the strength and vitality of the United Nations raison d'être can be restored:  to save present and future generations from the scourge of war, he stressed.