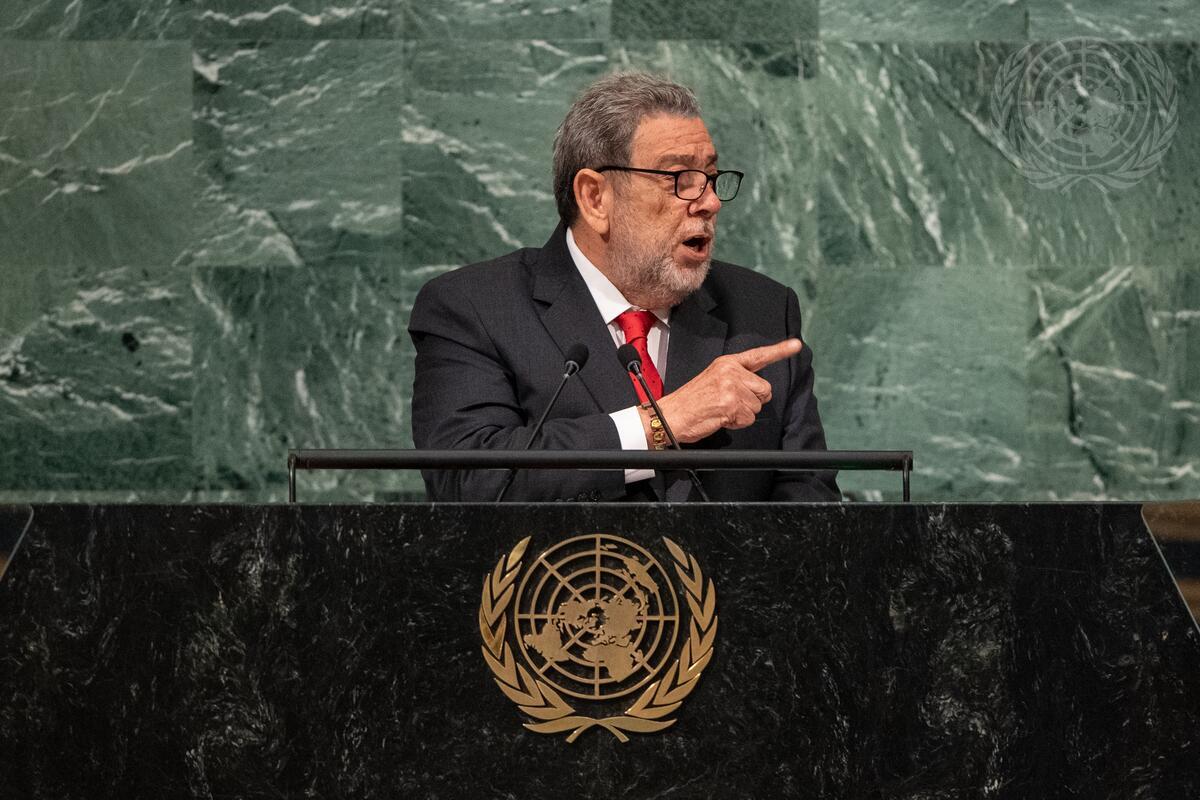 RALPH GONSALVES, Prime Minister of Saint Vincent and the Grenadines, said that, in times of overwhelming conflict, civilizations either descend into barbarism or into “respair”.  At present, the overwhelming majority of the world suffers as one State acts with exceptionalism, “grounded in manifest destiny”, while another, with military prowess, seeks global hegemony.  Instead of giving up, the world needs to remember that the multilateral system can also offer pathways to peace, prosperity, sustainable development and security.

Calling for global leadership to redouble its response to these challenges, he stressed:  “It is an indictment on our civilized Assembly that horrific wars rumble on, unabated, in Ukraine, Yemen, Syria and parts of Africa.”  He also condemned the oppression of the Palestinian people, the unjust embargo on Cuba and the imperialist attempts to subvert the elected Governments in Venezuela and Nicaragua.  Further, the situation regarding Taiwan is being ignored, he pointed out, adding that the United Nations could bring peace and security to the area by allowing that country’s participation in the Organization, World Health Organization (WHO) and the International Civil Aviation Organization (ICAO).  All these problems have solutions; mature, coherent multilateralism grounded in international law is the only way forward for humanity.

He also detailed a series of natural disasters experienced by his country, including 32 volcanic eruptions and Hurricane Elsa; these all followed the “harsh effects” and impact of the pandemic.  Now Saint Vincent and the Grenadines is suffering through scarcity and sky-rocketing prices of fuel, food and fertilizer.  He highlighted the multilateral organizations that were instrumental in delivering aid during the 2021 volcanic eruptions, including the World Food Program (WFP), United Nations Children's Fund (UNICEF) and the United Nations Environment Programme (UNEP).  These were coordinated through the United Nations, Barbados and the Eastern Caribbean.  “Episodic support must, however, metamorphose into structured ongoing solidarity if Small Island Developing States are to survive and thrive,” he cautioned.

The agenda for small island developing nations includes global action combatting and adaptation to climate change, financing for development and implementation of the Sustainable Development Goals, he continued.  Specific to the Caribbean context, however, is the urgent need for reparation from European States for their “commission of native genocide and the enslavement of Africans”, an issue that needs be addressed.  He also spotlighted the deteriorating situation in Haiti, a fellow member of the Caribbean Community (CARICOM), condemning the international community’s neglect on the issue and underlining that country’s need for the Organization’s help.  Further, he pointed out that his nation’s development is being hindered through banking “blacklists”, sanctions and disinformation.  Calling for appropriate United Nations reform, he encouraged continued “partnership between all nations” to ensure peace and security.