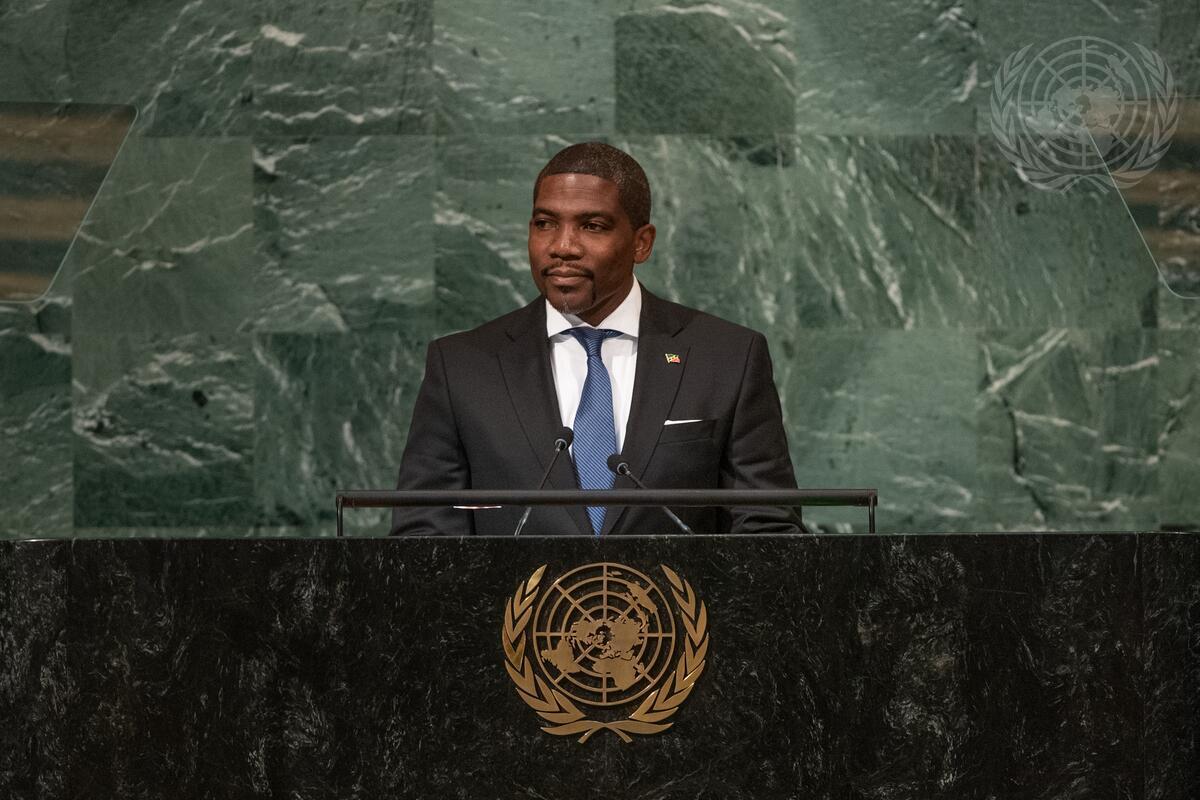 TERRENCE DREW, Prime Minister of Saint Kitts and Nevis, pledged his country’s “unswerving support” while speaking of the shifting tectonic plates of geopolitics and global stability particularly the pandemic, fragility and vulnerability of global supply chains, reform of the United Nations, advancements in technology, and rise in nationalism.  Echoing the words of former Secretary-General Kofi Annan that “no nation can defend itself against the threats to development entirely on its own," he asked the international community:  “do we want to be the body that abdicated our responsibility to protect the planet?  Or the body that debates and postures as the world around us submerges beneath cascading crises?”

For small island developing States and vulnerable peoples, he noted there is no international security without climate security and pressed the international community to foster true resilience and risk mitigation by providing tailored responses.   He humbly urged countries to honour their financial commitments by doubling their contributions to adaptation financing by 2025, adding that “a delayed response to these commitments would further imperil our developing nations.”  Climate financing, resiliency and environmental conservation must be integrated into national development policies and must be at the forefront of our global development agenda.”  He joined the Caribbean Community (CARICOM) in calling for the development and adoption of a multi-dimensional vulnerability index which provides special consideration for small island developing States, allows for redistributed development assistance and enables access to concessional financing.

In speaking about education as a great equalizer, he welcomed the Transforming Education Summit and reaffirmed his country’s commitment to education as a human right and the foundation of sustainable development and thriving societies.  Saint Kitts will reform its education system on the basis of equality, access and inclusion and has already decided to introduce free tertiary education for all.  It will also incorporate science, technology, engineering, the arts and mathematics specialist spaces in all schools, reintroduce the i-Literacy one-to-one laptop programme and strengthen technical and vocational education through alternative programming and scholarships.

Reaffirming that women and youth would continue to be at the forefront of social development, he pledged support for the Declaration of Future Generations and the Summit of the Future.  As its leader, he reiterated his country’s active commitment to meeting Sustainable Development Goal 5 and surpassing the goals of the Inter-American Convention on the Prevention, Punishment, and Eradication of Violence against Women.

Global solidarity, international cooperation and strong and meaningful partnerships continued to be necessary he said, noting “we are stronger therefore in the company of our friends, particularly those which share our democratic principles and values!”  Recalling the friendship and partnership of Taiwan and Cuba, he re-emphasized his country’s support for Taiwan’s meaningful participation in the United Nations system and called for the end to the embargo against Cuba.