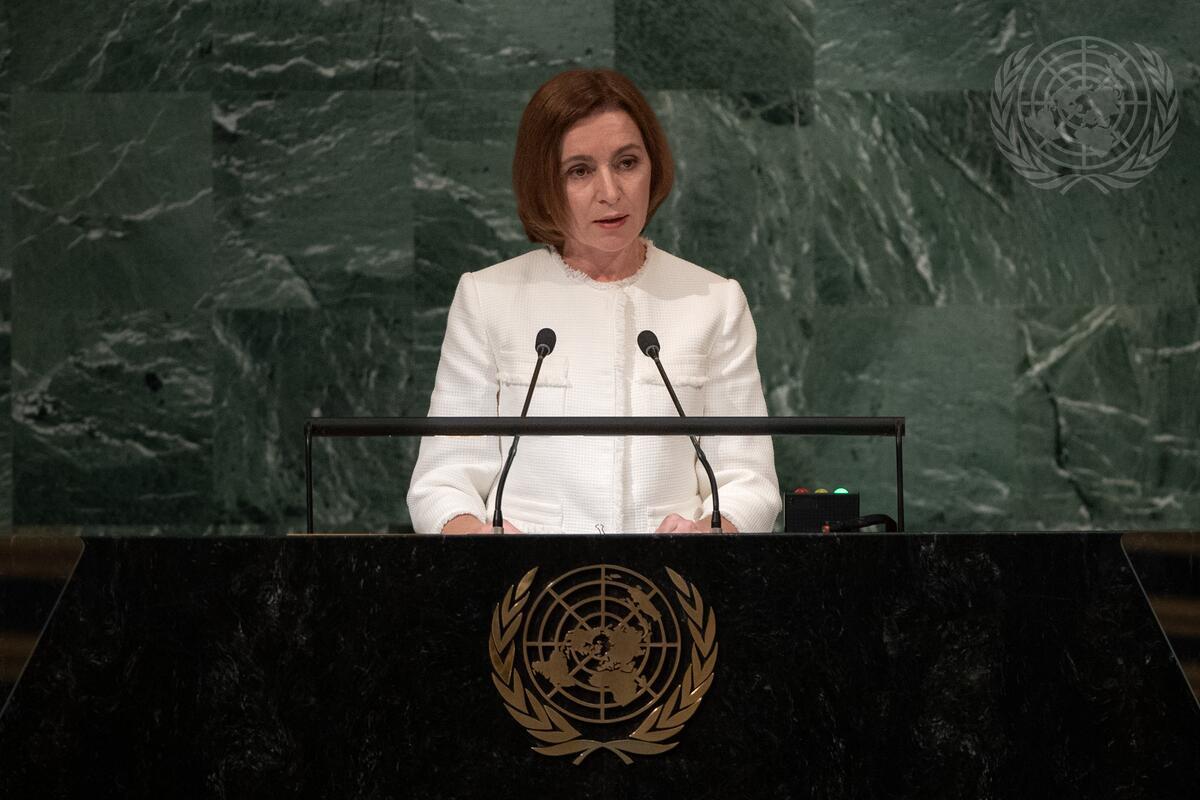 MAIA SANDU, President of the Republic of Moldova, addressed the General Assembly in her national capacity “as a future member of the European Union” and expressed gratitude to the 27 European Union member States for their unanimous support.  “By applying to join the European Union, we want the world to know:  We choose democracy over autocracy, liberty over oppression, peace over war and prosperity over poverty,” she stressed.  European Union candidate status gives the Republic of Moldova a clear sense of direction, a unifying goal, an anchor and a strong sense of belonging to the free world.

She underscored that the war in Ukraine is not just an attack on a neighbouring country but an attack on the rules-based international order, nuclear safety and food supplies to countries in the Middle East and Africa.  She firmly condemned the war against Ukraine, as well as the recently announced additional mobilization of troops by the Russian Federation, as she expressed the utmost admiration of the people of the Republic of Moldova to all Ukrainians for their courage, resilience and inner power to continue the fight for survival, justice and freedom.  Stressing that it is a moral duty of the international community to continue supporting Ukraine, she emphasized that that country is fighting today “to keep all of us safe, to keep Europe safe”.  A country of less than 3 million people, the Republic of Moldova sheltered more than half a million refugees fleeing the war in Ukraine.  At the peak of the inflow, its population grew by 4 per cent.  She expressed gratitude to all Moldovan families who showed unprecedented solidarity with refugees by opening their homes and hearts to those in need.

The Republic of Moldova knows what it means to be a country divided by conflict:  in 1992 it faced a brief but tragic war in the Transnistrian region.  As the Russian Federation launched its war against Ukraine, the Republic of Moldova started to work harder than ever to maintain peace on both banks of the Nistru River, ensuring that its citizens, including those residing in the breakaway region, continue to enjoy peace.  She underscored that the illegal presence of the Russian military troops in the Transnistrian region infringes on her country’s neutrality and increases its security risks.  Thus, she called on the complete and unconditional withdrawal of Russian troops and on the destruction of ammunition from the Cobasna [ammunition] depot in Transnistria, which poses a security and environmental threat to the region.

Abnormally high prices for natural gas and Moscow’s attempts to weaponize gas and oil supplies to Europe triggered an unprecedented energy crisis, she continued.  Moldova is one of the most vulnerable countries in the face of this crisis, yet it is determined to diversify its energy sources and decrease dependence on fossil fuels.  The Republic of Moldova plans to increase its share of renewable electricity supplies from 3 to 30 per cent in the next 3 years, which will make the country stronger and the environment healthier and safer, she said.

The Republic of Moldova is pressing ahead with its reform agenda by building a stronger and more democratic State.  In 2021, it improved 49 positions in the Press Freedom Index, ranking fortieth in the world.  She said that justice reform and the fight against corruption lays at the core of her country’s transformation agenda, as it works hard to become a better place for investors — to create jobs, boost the economy and bring greater prosperity to its people.  The Republic of Moldova is also investing in connectivity with Europe to bring the country closer to European standards.  “We are determined to bring Moldova into the [European Union]”, she underscored, “so that every Moldovan can have better living standards and more economic opportunities at home”.