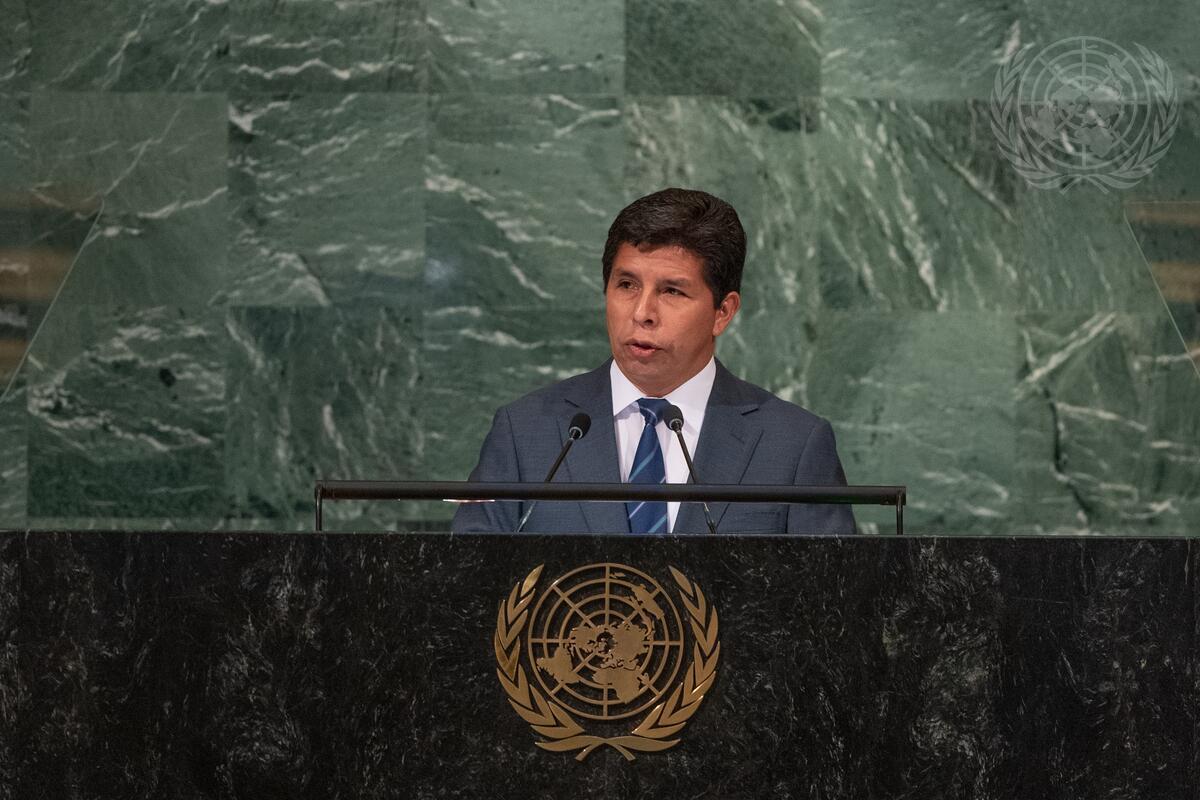 PEDRO CASTILLO TERRONES, President of Peru, pointing to a world headed towards clashes and interests pitted against one another with grave tensions reaching historic levels, reaffirmed his country’s defence of the principle of non-aggression and the territorial integrity of States.  He reiterated the illegitimacy of the Russian Federation’s intervention in Ukraine and the occupation of Palestinian and Arab territories since 1967.  “There are no good or bad armed interventions,” he said, adding that all unilateral sanctions, including economic ones, are illegitimate and run contrary to international law.  Stressing the need for a ceasefire in Ukraine, he also supported the Secretary-General’s call for arrangements for the export of Russian fertilizer, as its absence is suffocating the poorest farmers of the developing world and threatening the human right to food.  Regarding the situation in Palestine, he said the international community must take up its responsibility to broker a two-State solution along the 1967 lines in order to establish secure borders and lasting peace.  He announced Peru’s intentions to soon open a representative office in Palestine.

With the weakening of diplomatic negotiations to resolve armed conflict peacefully, he stressed the need to strengthen and expand United Nations peacekeeping operations.  For its part, Peru has almost doubled the number of its military contingents in six countries, particularly for the pacification and stabilization of the Central African Republic.  He said that a few days ago he opened in Lima the first conference of Latin America and the Caribbean on peacekeeping operations, which resulted in the creation of the Latin American and Caribbean Network for Cooperation in Peacekeeping Operations.  Peru is committed to the immediate implementation of the network.  Recalling Latin America’s role in the creation of the United Nations, he said the region must increase its support for resolving conflict.  For its part, Peru will increase its role to consolidate South America as a zone of peace.

“Since wars begins in the mind of men, it is in the minds of men that the defences of peace must be constructed,” he said.  This involves promoting dialogue, the peaceful resolution of conflict, and not exploiting the weak.  Hate, racism, intolerant xenophobia and antisemitism must also be rooted out.  States must guarantee freedom as well as the human rights to education, housing, food, water and a decent living wage.  Building peace requires resolving the unresolved situations of colonial territories and peoples and the right to self-determination.  Peru has re-established diplomatic relations with the Sahrawi Arab Democratic Republic and firmly supports its right to self-determination.  He fully recognized Argentina’s sovereignty rights over the Malvinas[*] Islands and demanded that the parties begin consultations towards this imperative goal.

Pointing to low global growth indicators in the wake of COVID-19, he said Latin America is suffered greatly from the negative impact of inflation, reduced economic growth, the reversal of gains in the fight against extreme poverty and   increasing debt.  To address these challenges, Peru’s “Driving Economic Growth. Driving Peru,” plan aims for 3.3 per cent economic growth, higher than the Latin American average.  In a bid to generate more and better employment, Peru is creating a more favourable environment for both domestic and foreign investment, with a focus on micro, small and medium-sized industries, he said, adding that Peru is a country with stable and positive macroeconomic variables.

Echoing the Secretary General’s call for a new social contract, he said realization of the 2030 Agenda for Sustainable Development must by the priority of the United Nations development system.  Describing this year’s extreme heat and floods as “cries of Mother Earth… asking us not to continue assaulting her”, he called on all Heads of State, particularly of industrialized countries, to bolster efforts to stop global warming.  Meeting the internationally agreed goals for reducing global emissions now requires seven times greater action to ensure global temperature rise is kept to 1.5°C.  He cited the Escazú Agreement as an instrument for reaffirming Latin America’s sovereignty over the natural resources of the Amazon and reaffirmed Peru’s support in negotiating a treaty regulating fishing and eliminating marine pollution beyond 200 nautical miles.  Stressing that coups in all forms are undemocratic, he reiterated the continued need to resolve conflict through negotiation and to respect human rights.  He said his Government’s agenda for social inclusion is based on the United Nations new proposed social contract to ensure no one is left behind.