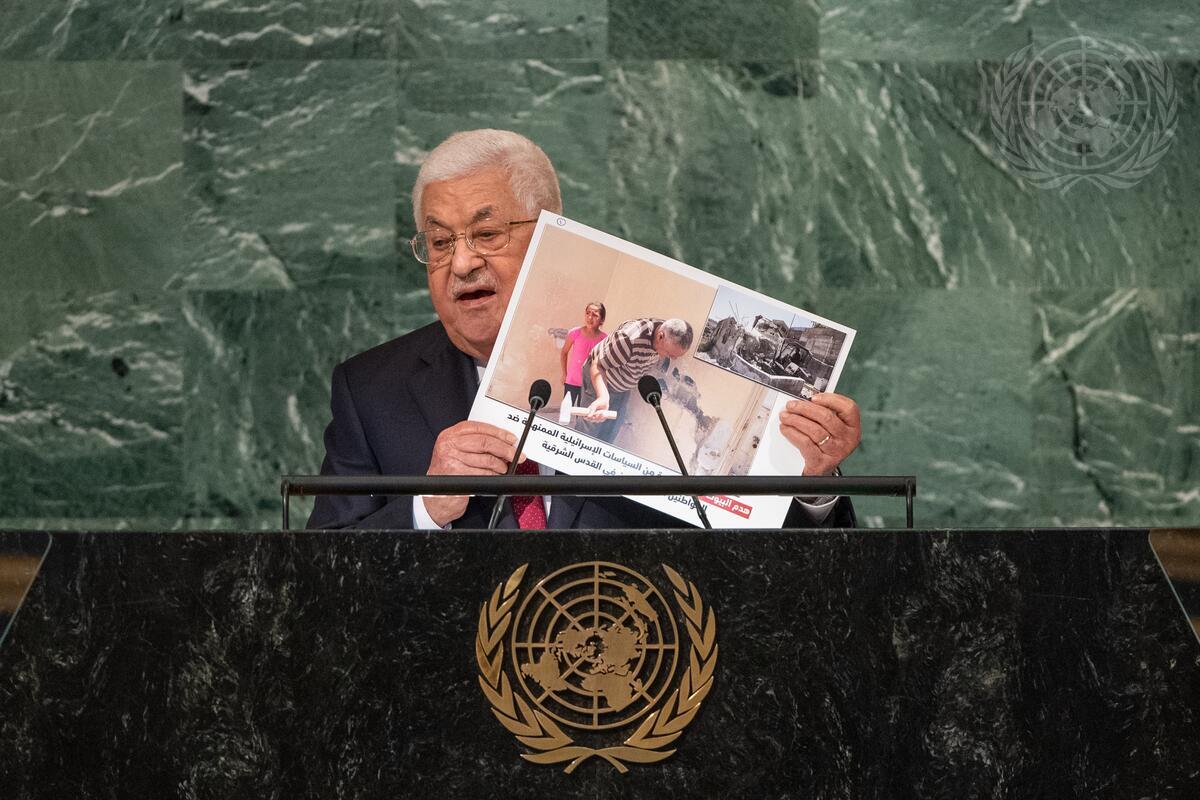 MAHMOUD ABBAS, President of the State of Palestine, said more than 5 million of his people have been living under the Israeli military occupation for more than 54 years.  Israel, ignoring the resolutions of the international legitimacy, has decided against partnership in the peace process:  from undermining the Oslo accords to its current premeditated and deliberate policies, Israel is destroying the two-State solution.  Imposing a status quo by force and aggression, Israel is not in contractual relations with Palestine, he asserted, pointing to Israel’s frantic campaign to confiscate Palestinian lands, build settlements and dilute his State’s resources “as if this land is empty and has no owners”.

He warned that Israel is giving total freedom to the army and to the terrorist settlers who are killing the Palestinian people in broad daylight, looting their land and their water, burning and demolishing their homes, compelling them to pay for the demolition or forcing them to destroy their homes with their own hands.  Furthermore, the Israeli Government has authorized the establishment of Jewish racist terrorist organizations exercising terrorism against the Palestinian people, he cautioned, urging the international community to list these terrorist organizations on the international terrorist list.  “Israel did not leave us any land on which we can establish our independent State,” he stressed, noting that the settlements constitute 25 per cent of the total population in the West Bank.

Spotlighting other violations, he said Israel is killing Palestinian people with impunity, as it did with the Palestinian-American journalist Shireen Abu Akleh who was deliberately killed by a sniper.  In this context, he called on the United States to prosecute those who killed her.  Israel is targeting Palestinian sacred sites, especially in Jerusalem, he recalled, showing photos of the Muslim and Christian holy sites that are being targeted daily by Israel without any justification.  Israel is also imposing falsified curricula in Palestinian schools in occupied Jerusalem, changing the content and subsequently imposing the curricula on Palestinian children, he said.  Moreover, Israel is disrupting the presidential and legislative Palestinian elections by forbidding Palestinian citizens in Jerusalem to take part in the process, he said, adding that this practice took place in 1996, 2005 and 2006.  Israel — enacting racist laws — is an “apartheid regime”, he exclaimed, asking why it is not held accountable for violating international law.  “Who is protecting Israel from being accountable?” he continued.  “The United Nations.  And on top of the United Nations, the most powerful of the United Nations.”  On double standards, highlighting that Palestine is not treated equally, he said Israel has recently closed the headquarters of six Palestinian human rights groups that it considers terrorist organizations.

He went on to underline that Israel has committed more than 50 massacres since 1948; during the most recent one — against Gaza, targeted with missiles — 67 children were killed, according to the New York Times.  He urged Israel to recognize its responsibility, apologize for committing these massacres and displacing the Palestinian citizens, and bear legal, political, moral and material responsibility.  “We are the only people on this planet still living under occupation.  Why?” he asked, stressing that the United Nations has adopted hundreds of resolutions on Palestine — 754 General Assembly resolutions, 97 Security Council resolutions, 96 resolutions from the Human Rights Council — while none were implemented.

Expressing disappointment that the international community was unable to end the occupation and Israeli heinous aggression, he asserted:  “We will not resort to weapons, we will not resort to violence, we will not resort to terrorism, we will fight terrorism with you.”  He warned against protecting Israel from accountability as Israel would not be able to pursue its hostile policies without the support of other States.  He concluded by reiterating his request for full-fledged membership for Palestine in the United Nations.  “We have had enough resolutions and enough words,” he asserted, urging the Israeli Government to go back to the negotiation table immediately.