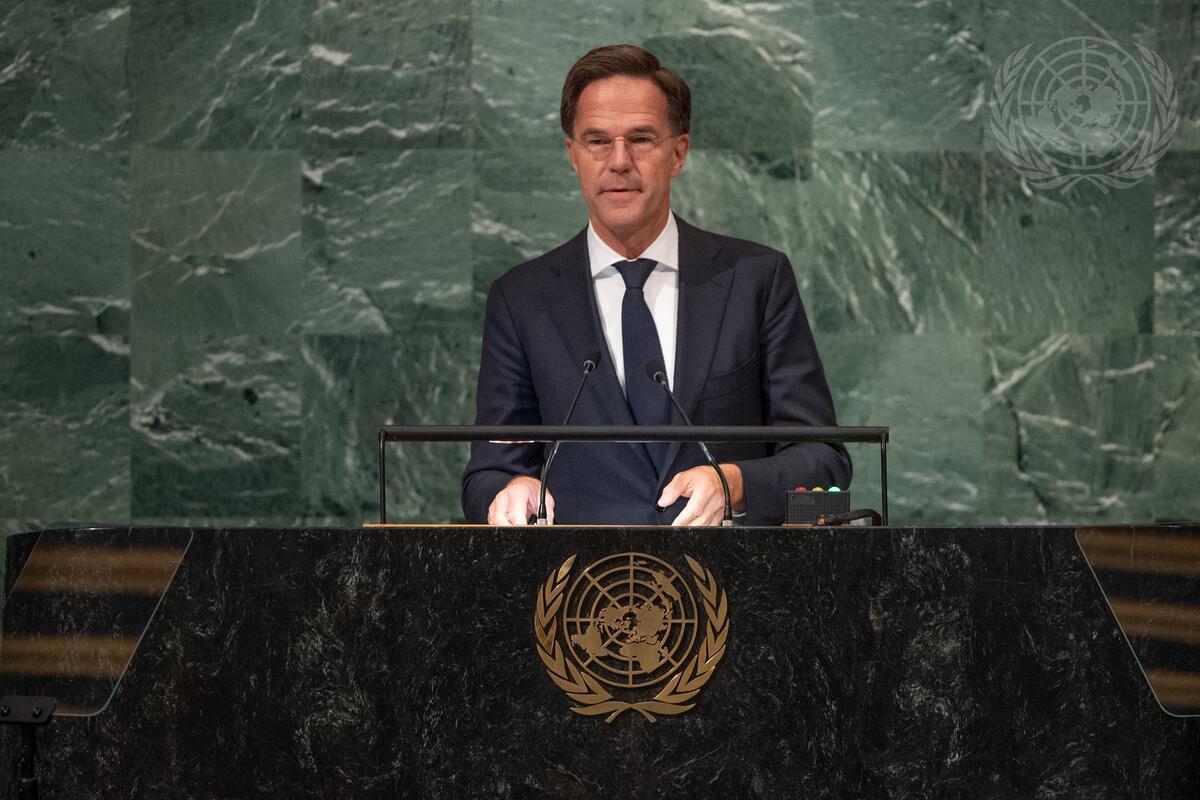 MARK RUTTE, Prime Minister of the Netherlands, said that growing up in Europe as a child of the cold war, he remembered vividly when the first breaches in the Iron Curtain began to appear.  Referring to Mikhail Gorbachev who, although coming from a dogmatic, undemocratic and oppressive system, had the courage to choose freedom and humanity, he pointed out that people always have a choice.  He said that his message today was that working together under the laws of justice is and will remain the only path to a safe and prosperous world.  In that regard, the Russian Federation’s aggression must be stopped:  “Russia is not the victim here, it is the aggressor.  And the whole world knows it.”  Moreover, the war is bigger than Ukraine, it’s about a sovereign people’s right to choose its own path and thus about the freedom of everyone, he added.  The North Atlantic Treaty Organization (NATO) and the European Union are more united than ever — as should all Member States be in condemning this unprovoked war, this assault on the Charter, the international rules-based order, security and the very foundations of United Nations partnership.  President Putin’s speech this week shows that he is losing his own ill-thought war and clutches to his delusionary narrative full of lies and deceit.  The nuclear threats are meant to show division, but instead there is growing unity.

Appealing to all Member States to stand firm until peace, freedom and territorial integrity are fully restored in Ukraine, he also pointed to the period that would follow that, namely the rebuilding and achieving of justice.  He recalled his visit to Bucha and the evidence of atrocities in Izium, saying that the crimes of sexual violence, deportation, torture, random killing and others must not go unpunished.  On that point, he said that the Netherlands and the The Hague — the legal capital of the world — feel a special responsibility in that regard.  Dutch forensic experts were sent to Ukraine in fact-finding missions and in July the Ukraine Accountability Conference was hosted in The Hague in close cooperation with the International Criminal Court where 45 countries agreed on key priorities in guaranteeing justice for Ukraine.  Preparing Ukraine for a long and painstaking process and pledging the Netherland’s support during that process, he explained how it for the last eight years has worked on holding the Russians responsible for the downing of flight MH17 over eastern Ukraine.

Worldwide cooperation on the other great global issue — climate change — is an absolute must, he said.  Explaining that the Kingdom of the Netherlands is made up of four different countries and experiences heavier rainfall and drought on the European side as well as severe hurricanes and rising sea levels on the Caribbean part, he stressed that small island developing States are at the forefront of the world’s climate adaptation strategies.  Continuing, he said that 90 per cent of all natural hazards manifest themselves through water, via flooding, drought or pollution, showing that water is at the heart of many global problems.  To address this issue, the Netherlands, together with Tajikistan, will host the 2023 United Nations Water Conference.  Besides that, he stated that European Union member States remain fully committed to a 55 per cent reduction in carbon emissions by 2030 and a swift transition to clean energy, and that the Netherlands combats deforestation and helps the world meet the $100 billion climate finance pledge.  Currently, 50 per cent of all money the Netherlands spends on international climate action already goes to climate adaptation and resilience.  Calling cooperation the only way forward with the United Nations as a vital tool, he urged the global community to come together to address the major issues faced today.  “Now is the time to speak out.  Now is the time to be on the right side of history,” he concluded.