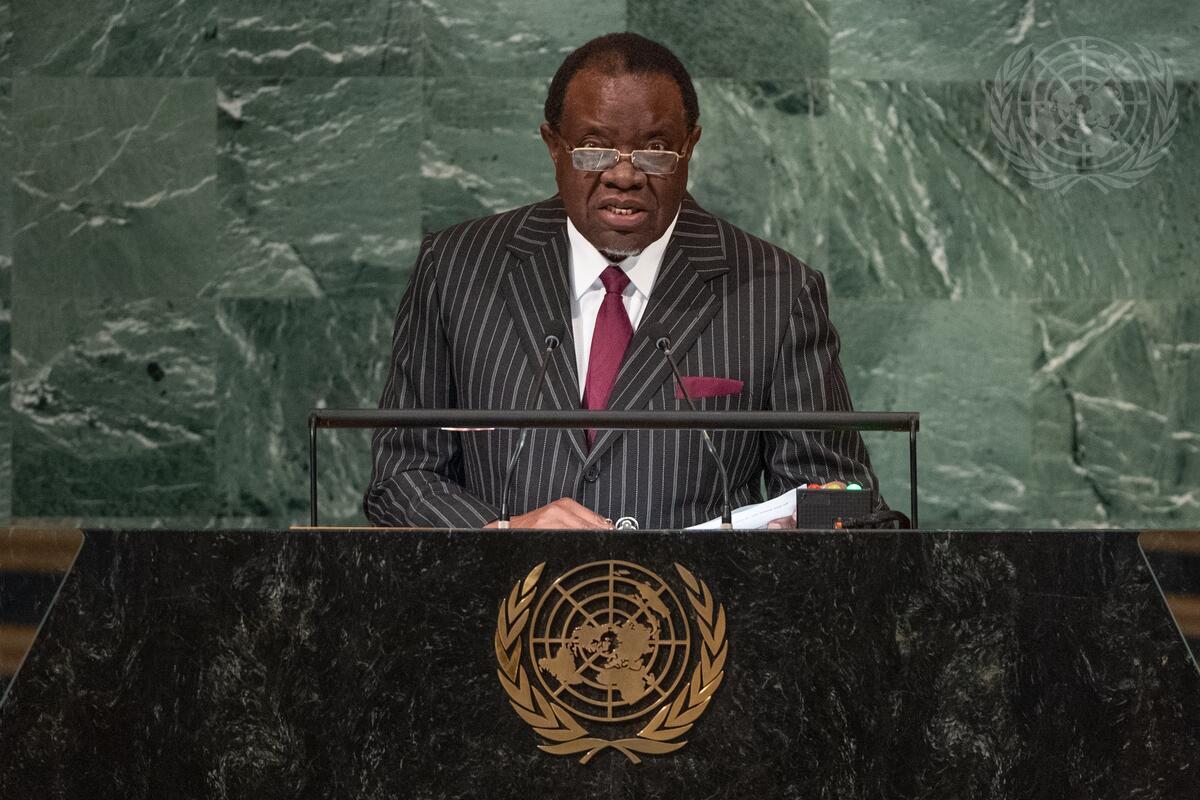 HAGE GEINGOB, President of Namibia, said that during the period of his country’s independence, it built a strong foundation for governance architecture with an emphasis on strengthening processes, systems and institutions.  In Namibia, the presence of women in line of succession in the Government is a demonstration of the strides the country made in gender equality.  Currently, women representation accounts for 40 per cent in the National Assembly, whereas 90 per cent of Namibia’s banks are chaired by women.

Namibia supports convening the Summit of the Future, proposed by the Secretary-General “at the earliest opportune time”.  The education sector in Namibia has consistently been prioritized through allocation of resources, and its consistent prioritization of policy development.  Thus, that sector receives the largest share of budgetary support, equivalent to 8 per cent of the country’s GDP and almost a quarter of the total national budget.  His country offers free primary and secondary education, which demonstrates its commitment to prioritizing and expanding access to education for all.  Furthermore, Namibia set up the Fourth Industrial Revolution Task Force to strengthen its domestic capabilities and derive optimal gains from the next industrial revolution.

As a Chairperson of SADC, he called for peaceful general elections in Lesotho on 7 October and added that he commenced a process of dialogue with the leaders of Eswatini, Lesotho and Mozambique to ensure the successful implementation of SADC decisions, for peace and stability in the region.

“Self-determination is a human right,” he said, urging the Assembly to start implementing the two-State solution as the only viable alternative that can end inequality and bring peace to the peoples of Palestine, Israel and the whole region.  He also expressed concern about the lack of progress in implementing United Nations resolutions on Western Sahara.  “Namibia pledges un unwavering solidarity for nations that continue to bear the heavy brunt of sanctions,” he said, reiterating its longstanding call for lifting of the unjust embargo against Cuba.  “It is time that the sons and daughters of Cuba are given their right to a decent life, free from an embargo that denies them their right to develop their own country,” he said.  He then called for the lifting of sanctions against Zimbabwe, noting that President Emmerson Mnangagwa and that country’s people made laudable progress and reforms.

Like many developing countries, Namibia remains vulnerable to the asymmetrical impacts of climate change.  At the 2022 United Nations Climate Change Conference  the country plans to announce major developments in its ambitions to decarbonize global hard-to-abate sectors through the production of green hydrogen.  The first hydrogen-to-power project in Africa is expected to be operational by 2024 in the town of Swakopmund.  Namibia remains ready to work with the international community to ensure the most optimal utilization of its natural resources to combat climate change.  In this regard, his Government launched a national Sovereign Wealth Fund, Welwitschia Fund, to demonstrate the country’s commitment to fiscal prudence and sustainable resource management for current and future generations.