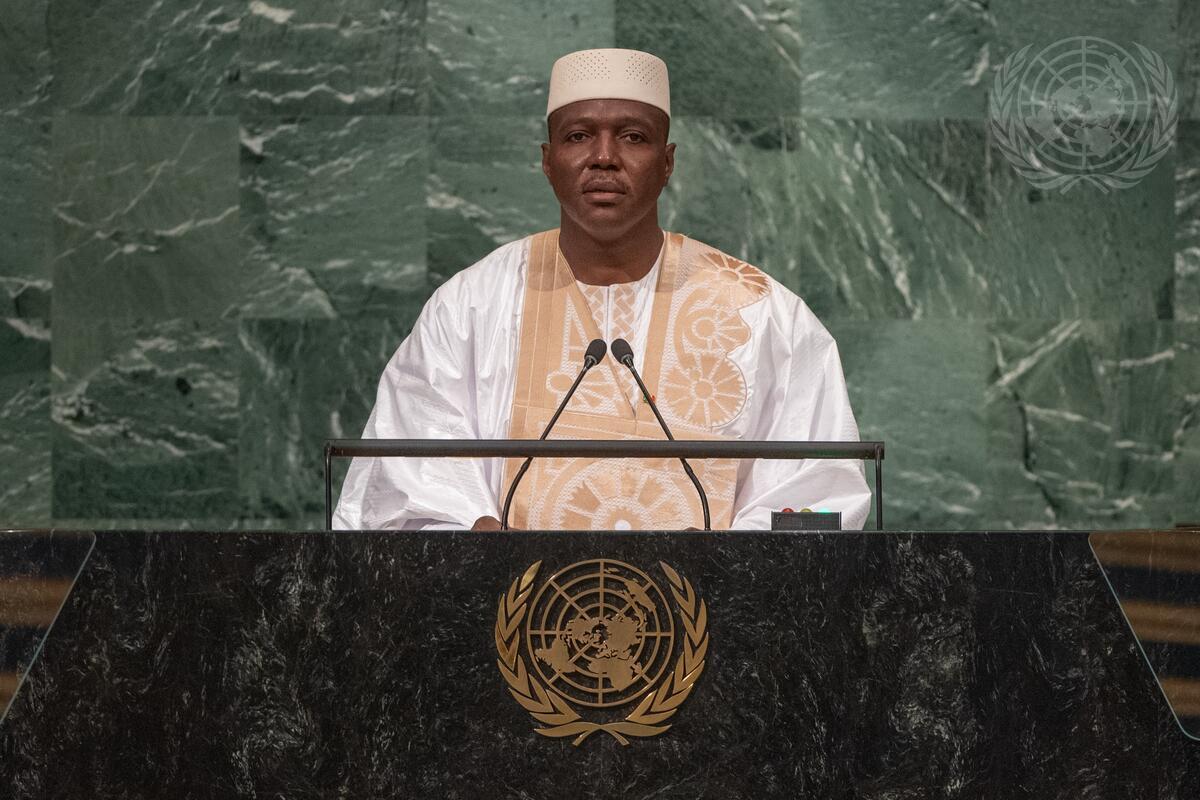 ABDOULAYE MAÏGA, ad interim Prime Minister of Mali, voiced his deep disagreement with the Secretary‑General’s stance on the 46 Ivorian mercenaries.  Describing it as a bilateral and legal issue between two brotherly countries that does not fall under the competences of the Secretary-General, and stressing that there are no links between the 46 mercenaries and the United Nations, he expressed his opposition to the portrayal of Mali as perpetrator rather than victim.  The Secretary-General is not a Head of State, and the acting President of Economic Community of West African States (ECOWAS) is not a civil servant, he added.  Since August 2020, Mali has been going through a transitional process which will end on 26 March 2024.  The transitional authorities have committed to carry out institutional reforms before organizing elections to guarantee lasting institutional stability in Mali, he underlined, pointing to the passing of the electoral law.  He also stressed that Mali is the only country in the world that is currently facing four different types of insecurity simultaneously:  terrorism; communal conflicts manipulated by terrorists and their foreign State sponsors; cross-border organized crime; and violent actions by isolated individuals.  Alongside the return to constitutional order, Mali is continuing to fight against extremist groups.  “The terrorist groups have been seriously weakened,” he said.  However, these criminal groups can still cause harm in an attempt to terrorize the people of Mali, he warned, praising national security forces.

Detailing his Government’s efforts to recruit, train, equip and bolster the operational capacities of the national defence and security forces, he cautioned that the military and security solution has its limits.  He drew attention to his Government’s global integrative strategy, including political, social and development measures.  The approved national stabilization strategy and the 2022‑2024 action plan reflect a holistic approach to implementing peace and reconciliation agreements.  On the Algiers Process, he welcomed the active role of Algeria and the support from the international mediation team.  He expressed gratitude to the neighbouring countries for having created conditions that allowed the safe and dignified return of Malian refugees, and paid tribute to all the victims — civilian and military — who have given their lives in Mali.  He reiterated his Government’s demand for a paradigm shift and adaptation of the United Nations Multidimensional Integrated Stabilization Mission in Mali (MINUSMA) to the environment it is deployed — to be a support force in Mali, as it seeks stability.

However, the decision of France to unilaterally withdraw its military forces from Mali was a stab in the back by the French authorities, he said, adding:  “The deeply anti-French French authorities have denied universal moral values and betrayed the humanistic legacy of their philosophers.”  Further, the French have become an obscurantist junta that is nostalgic for new colonialist, condescending and vengeful practices, he said, denouncing the illegitimate and illegal sanctions by the Economic Community of West African States (ECOWAS) against Mali.  The Malian population has been under embargo for seven months, he pointed out, praising the solidarity of friendly countries and the African people.  He also criticized obscurantism of the French junta, which violated Malian airspace by sending drones, military helicopters and fighter planes more than 50 times and by providing information and arms to terrorist groups.  Recalling the French intervention in Libya — decried by all Africa — and the forced participation of thousands of Africans in the First and Second World War, he said slave trade explains the economic well-being of France.

“How many Africans died for France,” he exclaimed, requesting an emergency meeting of the Security Council to enable Mali to present evidence of the attacks and violations committed by the French army, as well as evidence regarding terrorist groups receiving intelligence and arms.  Emphasizing that these hostile acts are incompatible with the Charter of the United Nations, he called for the personal involvement of the Secretary-General with the Security Council to guarantee the success of Mali’s request and the end of the proxy war imposed on it.  In combating terrorism and violent extremism, he highlighted Mali’s commitment to human rights and zero‑tolerance policy against impunity.  However, the Government is also opposed to the instrumentalization of human rights for political purposes.  He voiced regret over the selectivity observed vis-à-vis massacred populations in some villages and the media manipulation, describing innocent civilians as neutralized terrorists.  The Malian people fully support the Government and the return to constitutional order, he stressed, noting that the Malian transition authorities have no other aim but to carry out political and institutional reform before organizing elections.