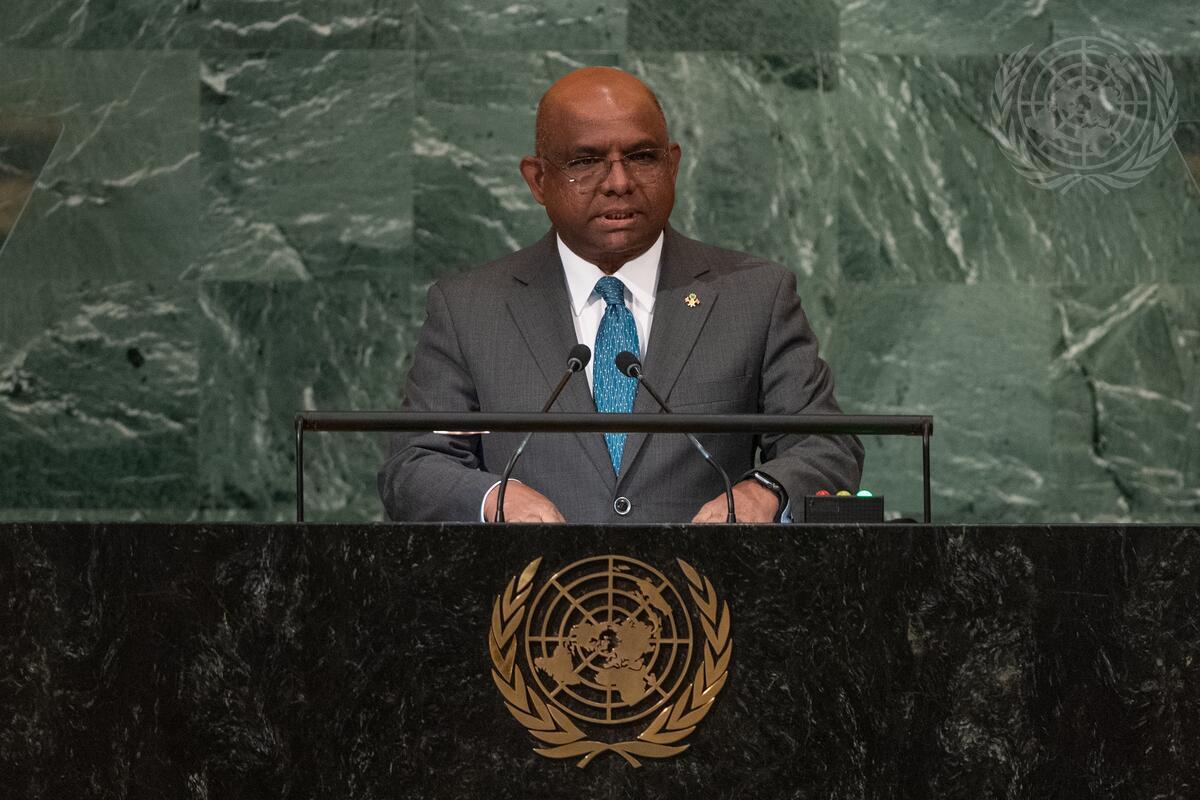 ABDULLA SHAHID, Minister for Foreign Affairs of Maldives, in pressing the Assembly to reflect on a more just, resilient world, called for countries to address the climate.  For small island developing States, he explained, “the difference between 1.5 and 2 degrees is death.”  Recalling Maldives’ work on Human Rights Council resolution 7/23 of 2008, he reaffirmed his country’s continued advocacy for and leadership on a rights-based approach to climate action and announced Maldives’ candidacy for a Human Rights Council seat from 2023 to 2025.  If elected, Maldives will prioritize addressing climate change as an integral part of global human rights discourse.  At the national level, Maldives launched the Glasgow-Sharm el-Sheikh work programme on the global goal on adaptation this year and will continue to pursue net-zero by 2030.  It also supports the global initiative to protect 30 per cent of the world’s oceans by 2030.  For countries to address the climate crisis, there must be sustainable, reliable financing.  Reminding partners of their pledges during the 2009 United Nations Climate Change Conference in Copenhagen and the agreements of the 2021 Glasgow Climate Pact, he urged partners to redouble adaptation finance, make access easier for all and make financing assessments fairer by utilizing alternative measures to GDP.  Maldives looks forward to the swift implementation of the Multidimensional Vulnerability Index.

Gender equality, he continued, must be at the forefront of the global agenda and stated “this injustice cannot continue.  We cannot solve the challenges facing all of humanity while half of humanity is denied their full potential.”  As women deserve an equal seat at the table, Maldives has allocated 33 per cent of its local council seats to women, appointed women as Supreme Court Justices and has half of its ambassadors as women.  In calling upon the international community to work harder in stopping conflicts and flagrant violations of international norms, he pleaded “the people of Ukraine, Afghanistan, Myanmar, among other countries plunged into conflict and bloodshed, deserve peace.  They deserve an end to the ongoing tragedies upending their lives.  As do the people of Palestine.”  He reiterated Maldives’ position of a two-State solution based on pre-1967 borders with East Jerusalem as the capital of Palestine as the only meaningful solution for peace.  In advocating for addressing terrorism as a priority, he condemned terrorism in all its forms and confirmed Maldives’ commitment to combatting terrorism and violent ideologies.

Pointing out that “[the world] cannot apply old solutions to new challenges”, he called for a reform of the multilateral system to better equip the United Nations in meeting contemporary and future challenges.  He welcomed the resolution to establish the United Nations Youth Office and committed to constructive follow up on the Secretary-General’s Our Common Agenda report.  The Security Council, he continued, must increase the number of permanent and non-permanent seats and ensure equitable geographic representation.  In welcoming the recent adoption of the veto initiative, he then expressed support for increasing the substantial role and moral authority of the General Assembly.