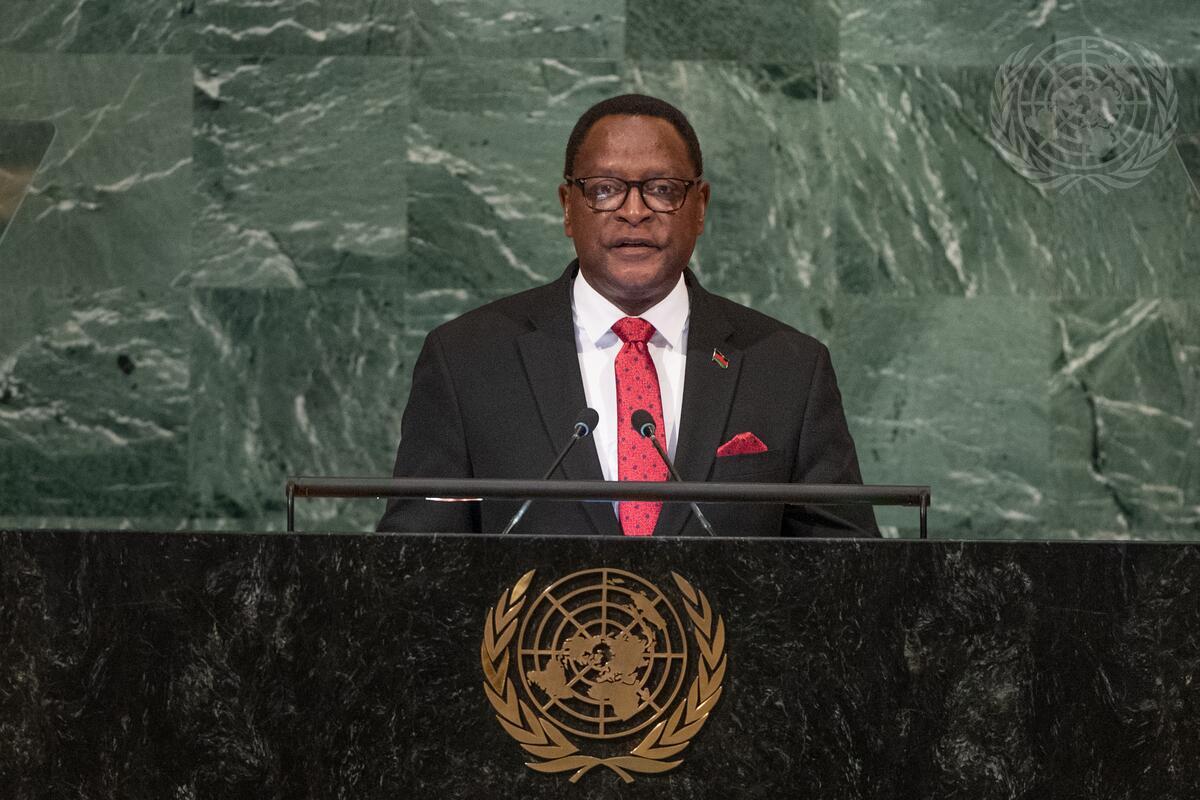 LAZARUS MCCARTHY CHAKWERA, President of Malawi, said climate change is a global problem that would never be solved unless all nations solve it together.  “Yet months after Malawi and its Sustainable Development Goals gains were set backwards by two tropical storms in quick succession, we have been left behind,” he asserted, spotlighting other global issues that called for global cooperation:  pandemics, regional insecurity and food shortage.  As a result of collective negligence, the global economy was now a house on fire, and some nations were left in the burning building, he continued, rejecting any attempts to politicize human suffering.

Addressing the current global food crisis, he noted that his country had just joined the Feed the Future initiative, providing access to new financing in the next few years to use Malawi’s vast arable land and large volumes of fresh water to develop mega-farms that will feed the world and lift millions of their farmers out of subsistence living.  “Malawi’s economic rise is imminent,” he stressed, citing the recent discovery in his country of the largest deposit of rutile in the world as well as the agricultural revolution that is coming to Malawi.

On climate change mitigation and adaptation, he said disasters such as floods, drought, pests, and cyclones were reversing years of developmental gains.  Cyclones Ana and Gombe alone destroyed strategic infrastructure, community assets, and displaced thousands of households.  And now, one fifth of Malawi’s population was at risk of acute food shortage, as 3.6 million Malawians were facing hunger from next month until March.  Although Malawi and other least developed countries contribute the least to climate change, they remain committed to the global climate agenda, he said, recalling Malawi’s own ambition to cut carbon emissions by half before the year 2040.

Underlining the importance of access to COVID-19 vaccines and strengthening health systems to build resilience against future pandemics, he called for investments in health infrastructure and research.  To this end, he welcomed the news that six African States have been chosen to produce messenger RNA vaccines in Africa, as well as Malawi’s role as a co-pioneer of the Accord for a Healthier World announced by Pfizer in Davos four months ago, aimed at bringing quality medicines to 1.2 billion people in low-income countries.

He went on to highlight one problem in desperate need of a solution for the most vulnerable least developed countries:  the unsustainable debt levels and distress they bear.  In this context, he welcomed the recent call of the IMF Managing Director on the world’s major lenders to relieve vulnerable countries of the debts that are shackling them, as even loans that were given and received in good faith have become unsustainable in the current climate of unforeseen external shocks.  He commended China for fulfilling the pledge to forgive interest-free loans owed by 17 African countries.  “Let this be the beginning of breaking the chains holding vulnerable countries back,” he asserted.  United States President Joseph Biden’s recent call to defend the rights of smaller nations as equals of larger ones “must not only be applauded, it must be uploaded,” he added, calling for a reformed United Nations that uses its multilateral muscle to give equal attention to public health, food insecurity, climate change and conflict, regardless of where they emerge or whom they affect.  “We are one humanity facing the same storm in the same boat,” he concluded.