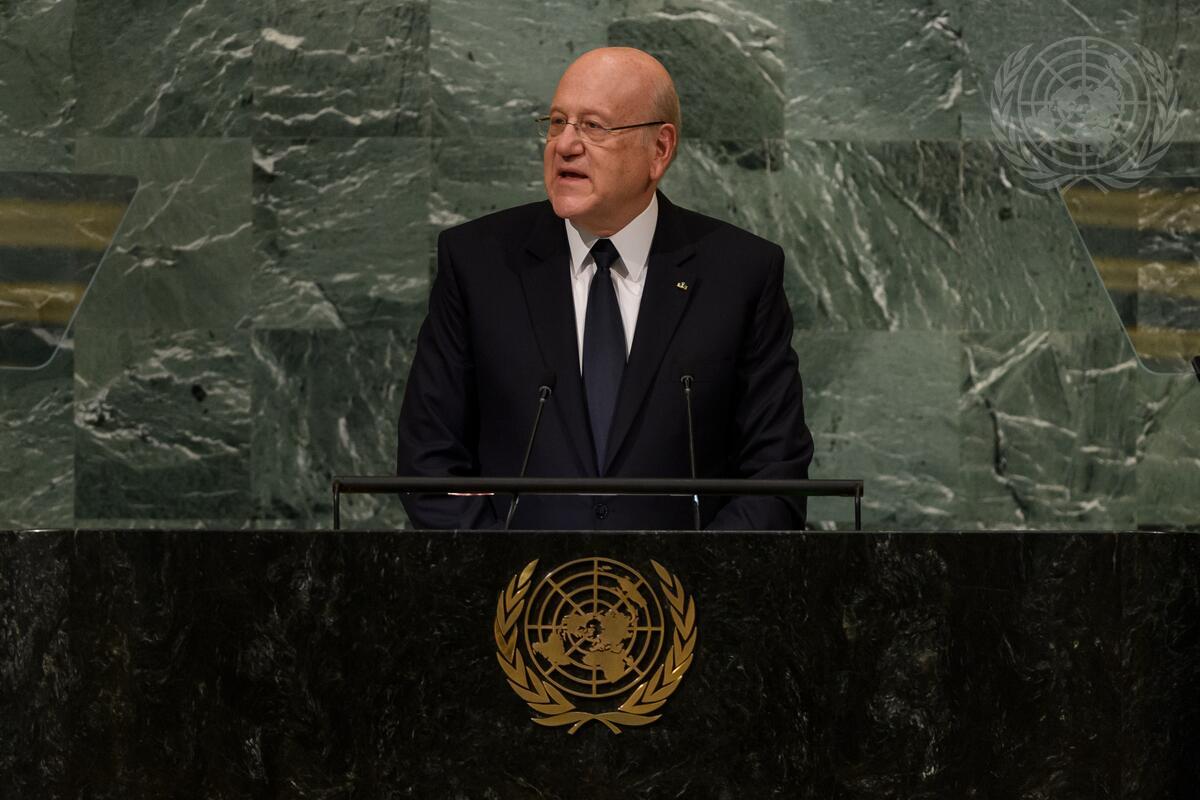 MOHAMMAD NAJIB AZMI MIKATI, President of the Council of Ministers of Lebanon, expressed thanks for all efforts in helping to country to alleviate the consequences of its stifling economic crisis, as well as the United Nations Interim Force in Lebanon (UNIFIL) for their sacrifices and efforts in order to maintain stability in southern Lebanon, in close coordination with the Lebanese armed forces.  Turning to the demarcation of its maritime borders, he cited the mediation of the United States, under the auspices of the United Nations, affirming Lebanon’s absolute commitment to its sovereignty, rights and wealth in its territorial waters and exclusive economic zone.  Calling for a long-overdue negotiated solution, he stated Lebanon is well aware of the importance of the promising energy market in the eastern Mediterranean, for the prosperity of all countries in the region.  He further welcomed efforts to reach an international understanding to rid the Middle East of weapons of mass destruction in implementation of General Assembly resolution 73/546.

Lebanon has been facing the worst socioeconomic crisis in its history, driving most of its population below the poverty line and causing a brain drain of its best young people.  Citing the collapse of the exchange rate of the national currency to its lowest historical level, and the closures imposed by the COVID-19 pandemic, he further referred to the tragedy of the Port of Beirut explosion — as the country remains in pursuit of the truth of that matter.  Lebanon has also been dealing with an unprecedented political crisis, a minefield requiring efforts to appropriately emerge from the situation.  However, the Government has achieved many goals, including notably holding parliamentary elections on time — but the road ahead for Lebanon remains long and arduous.  Beirut has signed a preliminary agreement with the IMF and will advance all necessary legislative and administrative reforms to overcome the present plight.

Citing its Arab affiliations and the Taif Accords, which ended the bloody civil war that afflicted the country, he stressed that a capable and prosperous Lebanon is urgently needed for peace and security in the region and the world.  Since the beginning of the Syrian crisis, Lebanon has adopted an open border policy to address the humanitarian considerations by hosting a massive number of displaced people.  However, after 10 years, he stressed that the displacement crisis has overwhelmed Lebanon’s capacity to bear the burden.  He emphasized that the Lebanese Constitution and the consensus of all Lebanese people prevent the integration or settlement on its lands — and that the only realistic and sustainable solution is to achieve a safe and dignified return for Syrians to their country, in the context of a road map with the cooperation of all parties.

He further stressed that it is time for the injustice done against the Palestinian people to end, with a sovereign and independent Palestinian State with Jerusalem as its capital, and implementation of all international resolutions in that regard, including the return of refugees.  Emphasizing the centrality of the United Nations Relief and Works Agency for Palestine Refugees in the Near East (UNRWA) in mitigating Palestinian suffering, he expressed deep concern over the accumulated deficit in its budget, jeopardizing delivery of services.

Despite current difficulties, his Government aims for Lebanon to be a forum for convergence rather than division — a space for dialogue and not competition, a spiritual custodian that brings together all religions for truth and justice.  He further called for the international community not to involve Lebanon in conflicts and crises in the region.