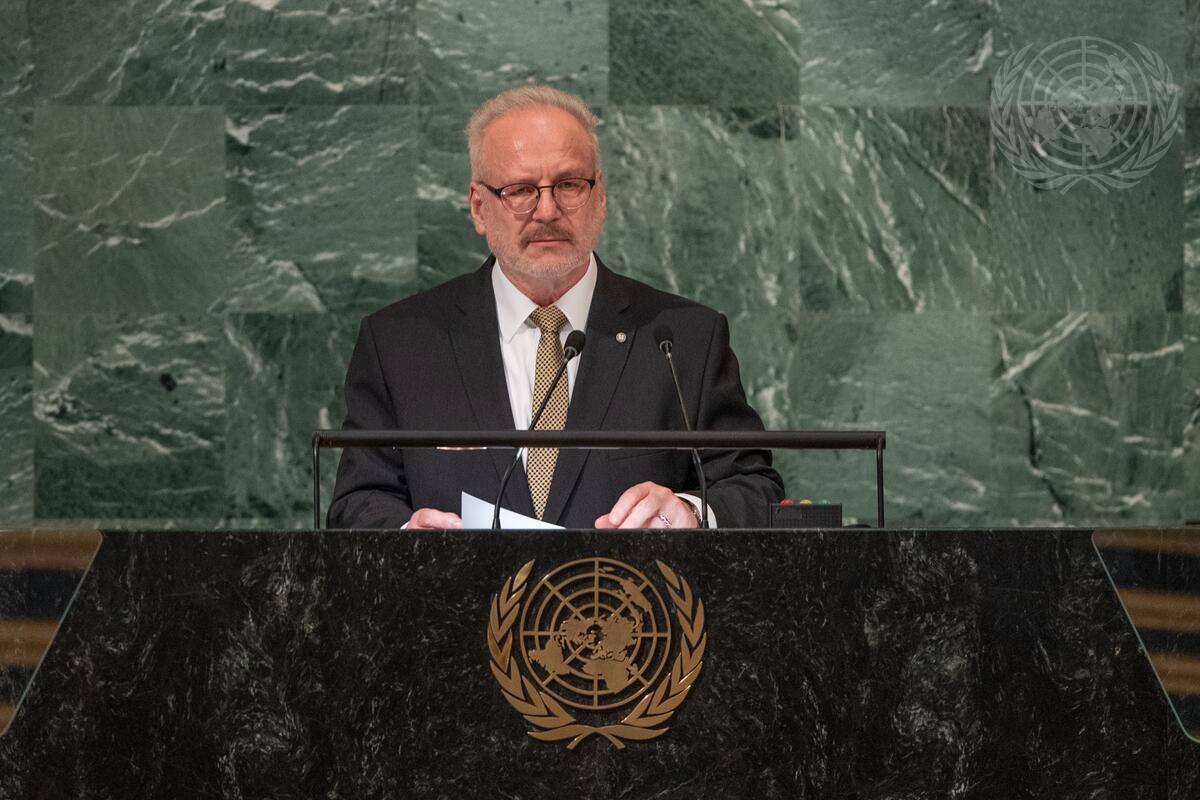 EGILS LEVITS, President of Latvia, stressing that starting a war of aggression is the gravest threat to world peace order, said that for seven months the Russian Federation has been waging an unprovoked and unjustified war against Ukraine, a sovereign United Nations Member State.  This is not just a regional security issue.  “In the twenty-first century, Russia maintains a nineteenth century ideology of imperialism, colonialism and racism,” he asserted, recalling that the Russian Federation invaded Georgia in 2008, illegally annexed Ukraine’s Crimea in 2014, and has used increasingly aggressive rhetoric towards other neighbouring countries.  Voicing concern over the humanitarian disaster in Ukraine, he reported that one third of the population has been forced to leave their homes.  Furthermore, Moscow is using its position in the energy market to exert pressure; high energy prices maintain high levels of global inflation, which affects the world's most vulnerable populations.

Underscoring Moscow’s limited ability to finance the war against Ukraine, he called for strengthening global sanctions in the fields of finance, trade, transport and energy, as well as restrictive measures against individuals and legal entities.  He also underlined that Belarus is equally responsible for enabling Moscow's military aggression against Ukraine.  “We stand with the brave people of Ukraine,” he exclaimed, noting that, since the beginning of the war, Latvia has spent over 0.8 per cent of its gross domestic product (GDP) on military, economic, financial and humanitarian aid to Ukraine.

“Today, we learn that partial mobilization has been declared in Russia, as their once-mighty army is overwhelmed,” he said, citing the defence mounted by the people of Ukraine and calling the “blitzkrieg” envisaged by the Russian Federation’s President, Vladmir V. Putin “a long nightmare”.  He further cautioned against Moscow’s plans to hold illegal referenda in the coming days on the annexation of the occupied territories of Donetsk and Luhansk to the Russian Federation.  This is a blatant contravention of both Ukrainian and international law, he pointed out, stressing that Latvia will not recognize the legitimacy of these referenda and calling on the international community to do likewise.

Underscoring the importance of accountability, he drew attention to proceedings of the International Court of Justice, International Criminal Court and the European Court of Human Rights on the Russian war against Ukraine.  However, a legal gap remains as no international court has jurisdiction over the main issue — the starting of a war of aggression — the gravest violation of the Charter of the United Nations and international law.  To this end, he called for the establishment of a special tribunal, whose main task would be to investigate the responsibility of the Russian Federation in the crime of aggression.  The special tribunal could be part of an international reparations mechanism, he added.

Turning to sustainable development and climate change, he described the implementation of the 2030 Agenda for Sustainable Development as the overarching goal of Latvia's development cooperation policy.  On the issue of global justice, he expressed the view that the greatest polluters should also bear a greater burden for the protection of the climate.  Commenting on the digitization — one of the most important agents of change — he warned against attempts to turn the digital space into a battlefield, where international law is challenged and basic rights are ignored.  In this context, he supported the proposal of the Secretary-General on elaborating a global digital compact, which should reduce the digital gap between developed and developing countries.