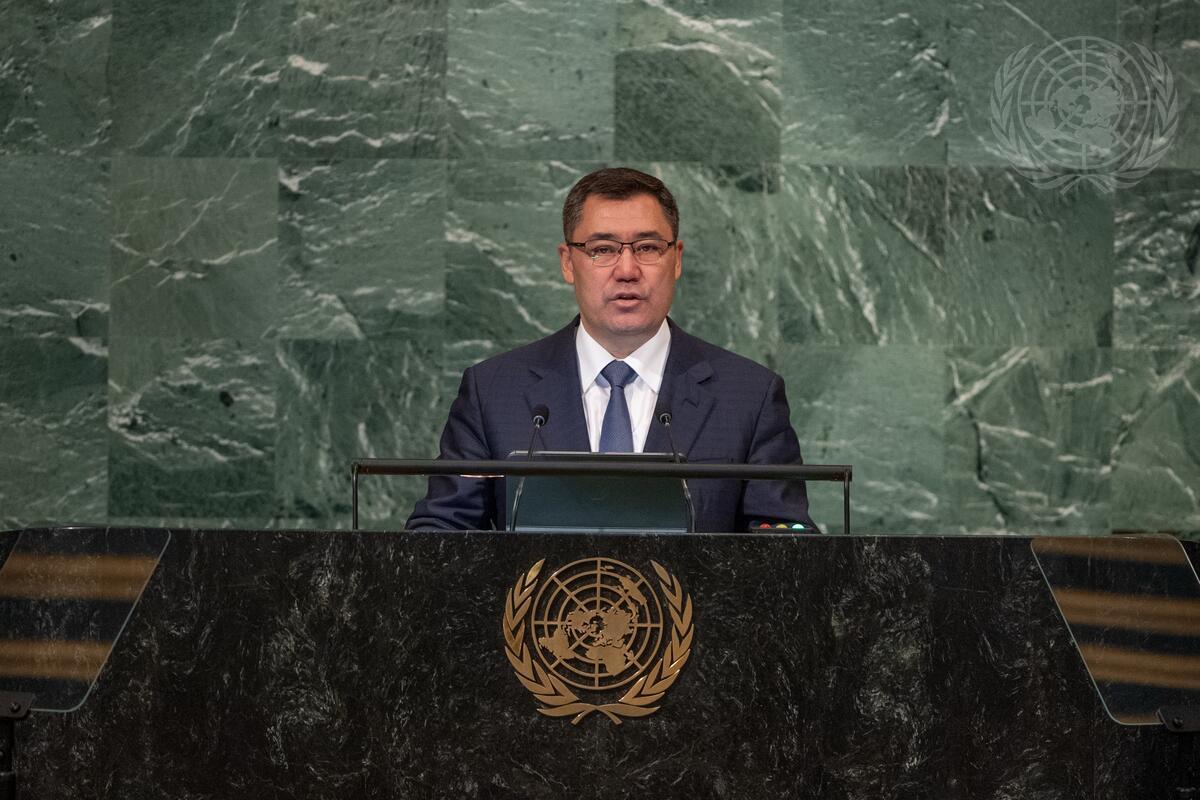 SADYR ZHAPAROV, President of Kyrgyzstan, addressed the General Assembly by expressing gratitude to the United Nations for its multifaceted contribution to the formation of his country as an independent and sovereign State.  Referring to the unprecedented complication of the geopolitical situation in the world, which has created a threat of the destruction of the fundamental foundations of peaceful coexistence and the inevitability of a major war, he recalled the high goals and objectives fixed in the Charter of the United Nations to maintain international peace and security and consequently take effective measures for prevention and removal of threats to the peace.

He further touched upon the actual situation unfolding on the southern borders of his country, recalling that the collapse of the Soviet Union in December 1991 paved way for territorial disputes and border problems, some of which have not been regulated to this day.  In 1999, Kyrgyzstan successfully completed issues of border regulation with China and Kazakhstan at the point of intersection of the State borders of the three countries.  In addition, it signed an agreement on State borders with Uzbekistan.  These agreements have allowed Kyrgyzstan to maintain peace, friendship and mutually beneficial cooperation with many of its neighbours.

Speaking on Tajikistan, he said that, despite his country being united with its neighbour by common values, culture, traditions and customs, Dushanbe disregarded the Alma-Ata Declaration, signed by 11 former Soviet Republics, which calls for recognizing and respecting each other’s territorial integrity, while also assuming “responsibility to maintain civil peace and international harmony”.  In April 2021, the armed forces of Tajikistan launched an unjustified, unprovoked large-scale aggression on his country’s territory, killing 36 citizens and also causing serious material damage.  On 14 September, Tajik forces attacked border and civilian objects along the entire perimeter of the Kyrgyz-Tajik State border, resulting in the evacuation of 140,000 civilians.

While noting his readiness to “spend as much time as possible to solve this issue [with Tajikistan] once and for all”, he emphasized that Kyrgyzstan does not claim foreign lands, nor does it intend to give a centimetre of its land to anyone.  “All border and internal issues should be resolved over the negotiation table,” he said.

Turning to other issues, he spoke of Kyrgyzstan’s commitment to the Sustainable Development Goals and their gradual implementation, referring to the country’s own potential as the main source and engine of such development.  Kyrgyzstan is actively developing its hydropower industry — the locomotive of the “green economy” — while putting small and medium-sized hydropower plants into operation.  Furthermore, Kazakhstan and Uzbekistan will participate in the construction of the largest hydroelectric power station — Kambarata — which will contribute to strengthening energy security and optimizing the use of water resources in the region.

The representative of Kyrgyzstan, responding to the statement made by Tajikistan’s delegate, said that Dushanbe presented its own version of the conflict on her country’s border.  Tajikistan’s delegation, shifting blame, did not admit guilt, she asserted, describing the conflict that took place between 14 and 17 September as a pre-planned military aggression of Tajikistan against Kyrgyzstan.  Tajikistan violated basic international principles, such as territorial integrity, the peaceful settlement of disputes, the non-use of force or the threat of use of force, and respect for human rights and freedoms, enshrined in the Charter of the United Nations.  As a result of Tajikistan’s unprovoked aggression, during which armed forces and heavy military equipment were employed, 62 Kyrgyzstani citizens were killed and about 200 injured, including 13 children.  Furthermore, 140,000 people have been evacuated from their permanent residence and forced to become internally displaced persons.  Condemning Tajikistan’s groundless accusations and misinformation campaign, she pointed to evidence of the aggression, including video recordings.