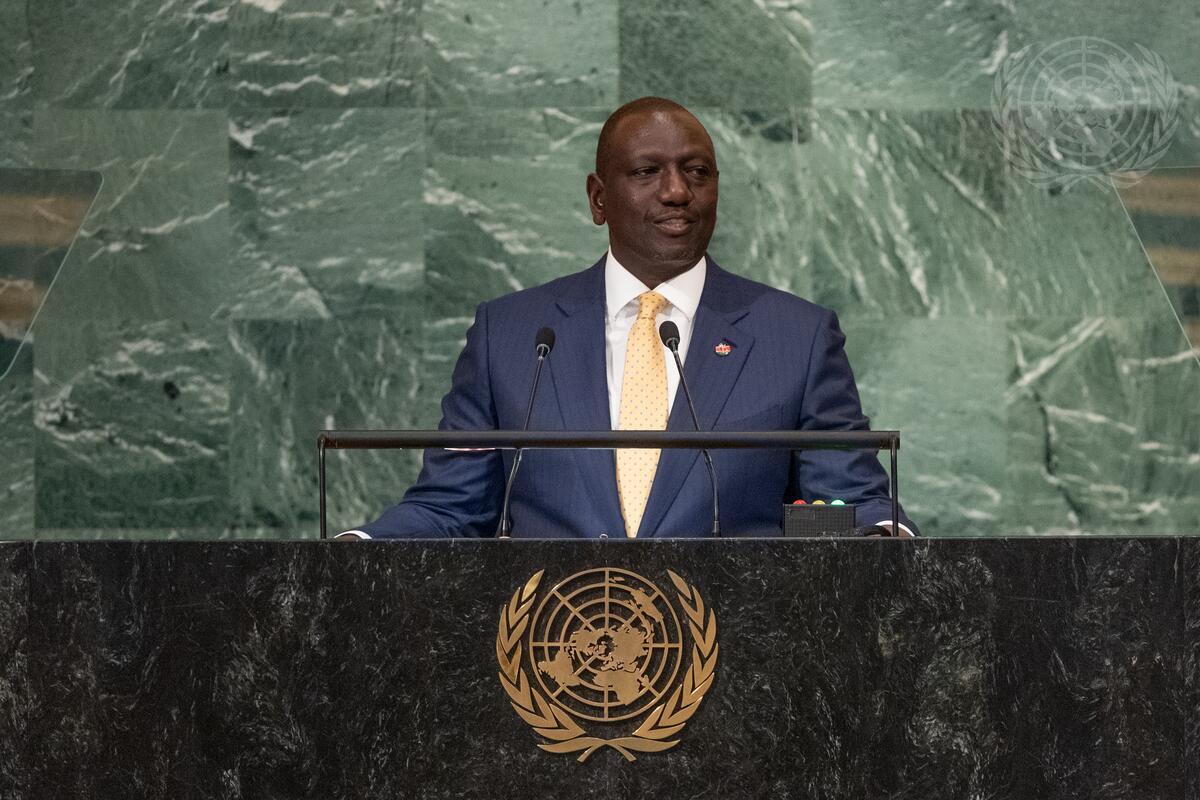 WILLIAM SAMOEI RUTO, President of Kenya, called his presence at the General Assembly, following his country’s peaceful, free and fair electoral process in August, a testimony to the universal power of democracy.  It shows the world’s shared aspiration towards stronger nations, robust institutions, effective constitutions and the rule of law.  At the same time, the world is faced with multiple grave challenges, like regional conflicts, the pandemic, food insecurity and a triple planetary crisis.  The theme of the seventy-seventh session of the General Assembly, “A watershed moment:  transformative solutions to interlocking challenges”, reflects this moment in time.

Similarly, these challenges give the international community a window of opportunity.  The pandemic stripped them from illusions and showed a global solidarity deficit.  Exclusionist nationalism among other things, he continued, impairs the resolve of the international community to guarantee fundamental rights and freedom for the people — especially the vulnerable bottom billion.  Stressing that no one must be left behind, he proposed to augment “building back better” into “building back better from the bottom”.  Including the world’s marginalized majority into the economic mainstream will harbour their ingenuity, industriousness and build prosperity.

The world is facing the consequences of climate change.  In Kenya, 1.3 million residents have become food insecure.  Lowered agricultural output, water scarcity and starvation are looming.  Referring to the report by the Intergovernmental Panel on Climate Change, he called upon Member States and stakeholders to not waste time to demonstrate political will to cooperate and share technologies — to jointly usher in a “new paradigm in multilateralism”.  Stressing how the agricultural sector is a fundamental vehicle for economic growth, he echoed the Secretary General’s call to solve fertilizer deficit issues and shared how Kenya is investing in climate change resistant agriculture.

Furthermore, now that education, health care and other public services have become reliant on digital access, more investments and global partnership are needed to take this “short cut to poverty reduction” and bridge the divide between the global South and North.  Besides that, building on the experience of the March 2022 United Nations Environment Assembly meeting in Nairobi, he proposed a legally binding instrument to end plastic pollution.  This relates to another vital sector, the blue economy.  Kenya remains a strong advocate of making the blue economy a development priority, as it has the potential to end hunger, spur economic growth and clean waters, he stated.  Finally, he called upon international financial institutions and the Group of 20 (G20) to use all financial instruments available to provide debt relief to the worst-hit countries and payment extension to middle-income countries in this post-pandemic, conflict-ridden world facing climate change.

During its time on the Security Council, Kenya has been committed to prioritizing regional peace and security, climate security and countering terrorism and extremism, he said.  However, the Council’s “relevancy, legitimacy and moral authority will remain deficient” without proper reform, democratization and inclusivity.  It is only one example of “the African exception from worldwide solidarity” and “particularly repugnant” he continued.  Kenya calls for the strengthening of multilateralism as the only path to peace and security in a prosperous world for all its citizens, he concluded.