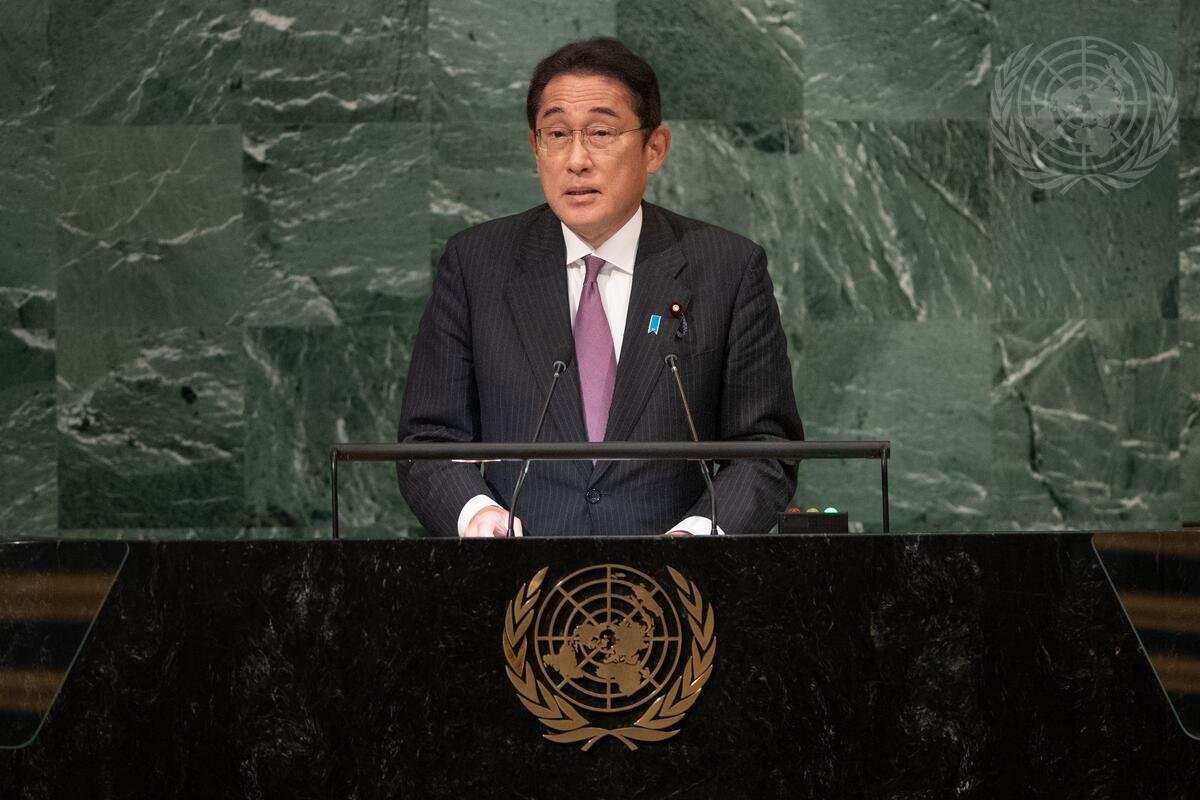 FUMIO KISHIDA, Prime Minister of Japan, said that 77 years after the establishment of the United Nations, the international community is  witnessing the devastation in Ukraine and around the world.  Calling the Russian Federation’s aggression against Ukraine an act that tramples on the vision and principles of the United Nations Charter, he urged “any and all countries to be under the rule of law — not the rule by force, which we absolutely cannot allow”.  Stressing that the Organization exists not only for the benefit of great powers but the entire international community — including the voices that are often unheard but equally legitimate — he said that to reaffirm United Nations principles and ensure an international order based on the rule of law, the United Nations must be reformed and its functions strengthened.

The credibility of the Organization is at stake due to the aggression perpetrated by the Russian Federation — a permanent member of the Security Council — against Ukraine, he said, stressing that Member States must act to restore it.  On Council reform — a subject being debated for over 30 years, he said the time has come to start text-based negotiations, pointing to the Summit of the Future in 2024 as “an excellent opportunity to broadly review the nature of the UN”.  Underlining that the General Assembly adopted a resolution condemning the Russian Federation in the strongest terms with an overwhelming majority, and thus proved to be the sole universal organ that represents all Member States, he expressed his country’s determination to further revitalize the Assembly and push the United Nations so it can pursue an even greater role in the maintenance of peace and security, while continuing to support the work of the Secretary-General.

Calling the threat of nuclear weapons “absolutely unacceptable”, he said that as a Prime Minister from Hiroshima he is firmly dedicated to a world free of nuclear weapons.  Greatly dismayed that the Russian Federation’s sole opposition blocked consensus on an outcome document that would maintain and strengthen the Treaty on the Non-Proliferation of Nuclear Weapons (NPT) regime, he affirmed:  “I, however, refuse to relent.  Because we are only one country away from adopting the draft final outcome document by consensus”.  Japan also seeks to normalize its relationship with the Democratic People’s Republic of Korea, in accordance with the Pyongyang Declaration signed 20 years ago by the two countries, he said, expressing Japan’s willingness to engage on matters of mutual concern and his openness to meet with President Kim Jong-un without any conditions.  He also touched on Japan's contributions to peacekeeping operations since 1992.

Stressing that strengthening the rule of law is especially important for vulnerable nations, while leading to sustainable growth and development for all, he stated Japan’s contribution to cooperation with other countries, including towards the realization of a “free and open Indo-Pacific.”  Serving as a non-permanent Security Council member from next January, Japan intends to take action to strengthen the rule of law in the international community and efforts based on the concept of human security in the new era, by enhancing resilience of individuals, societies and nations.  Japan will also continue to support initiatives through the United Nations Trust Fund for Human Security and invest in people.  He said that at the eighth Tokyo International Conference on African Development, he announced a $30 billion investment in Africa over the next three years, and that his country will also focus on human resource development and capacity-building in other parts of the world, underscoring the role of education.  The country has provided approximately $5 billion to support the COVID-19 response, including through the COVAX Facility, and decided to contribute $1.08 billion to the Global Fund over the next three years, he said, stressing that the country will chair the Group of Seven (G7) Summit next year.  Committing to revise its Development Cooperation Charter, and supporting Our Common Agenda, he concluded by expressing determination to work with all to strengthen the Organization.