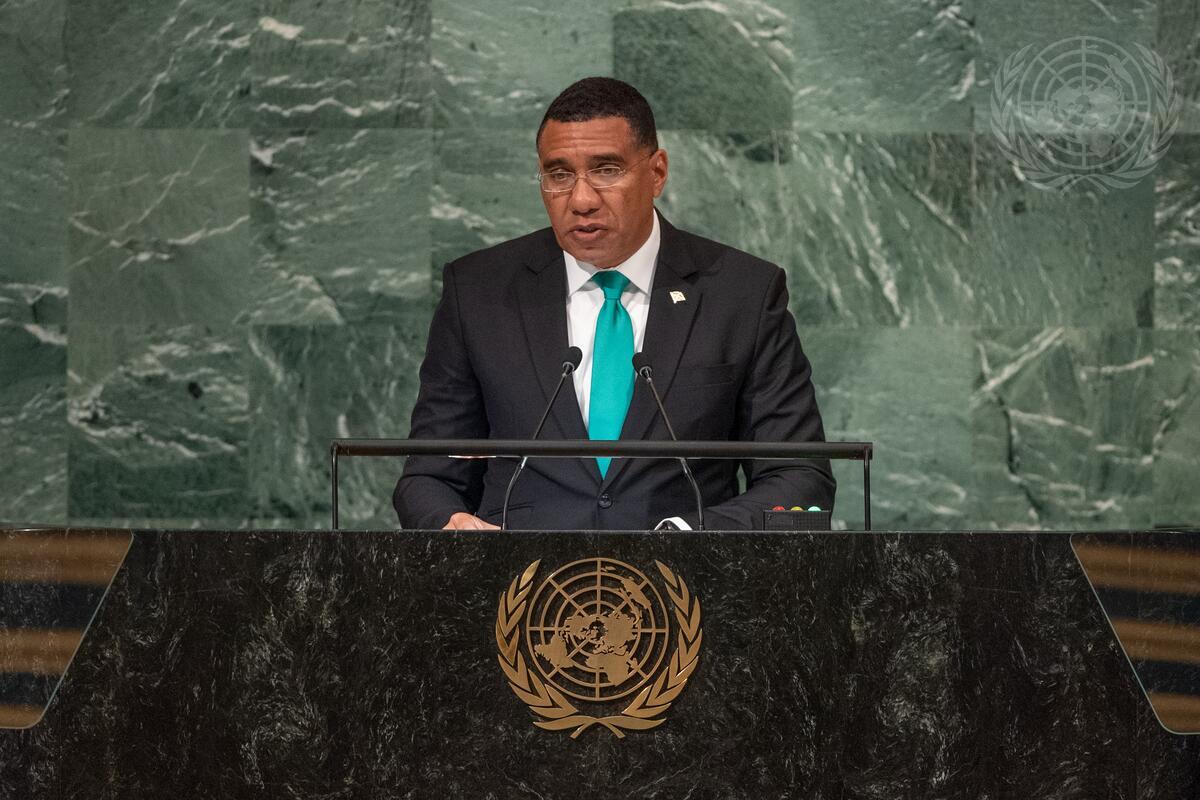 ANDREW HOLNESS, Prime Minister and Minister of Defence, Economic Growth and Job Creation of Jamaica, highlighted that his country celebrates 60 years of independence and membership in the United Nations this year.  While every country has been negatively impacted by overlapping crises:  “Indeed, recovery has been uneven, and there has been further widening of pre-existing development inequalities”.  Solutions, he stressed, should acknowledge the differentiated needs and vulnerability of each State.  Particularly vulnerability to climate and external economic shocks, he said to survive them and recover lost and damaged infrastructure, small island developing States are forced to borrow, only to be confronted again in a few years with another round of natural disasters, which could wipe out significant infrastructure and add to already high debt.  “As I speak, I am monitoring a tropical system that is threatening in the Caribbean,” he underlined, calling for a targeted approach to access development finance and fully supporting the work of the High-Level Panel developing the Multi-Dimensional Vulnerability Index.  “Without the acknowledgment of vulnerability as a basis for access to finance, SIDS will continue to struggle and will be unable to achieve the SDGs,” he warned.  He also touched on governmental policies to drive the debt downward and innovative financial tools.

Despite small island States’ best efforts to improve fiscal management and debt sustainability, “a single climate generated event could wipe out 100 per cent of our economy in a few hours”, he continued, emphasizing that concerted action to slow down and halt global temperature rise is literally a question of their survival.  Ahead of the upcoming twenty-seventh United Nations Climate Change Conference, he called on all countries to meet their commitments and contributions to climate targets and on the developed States to increase commitments in financing, particularly for adaptation and for loss and damage.  He also stressed Jamaica’s commitment to safeguard ocean and marine resources, including through the United Nations Convention on the Law of the Sea.

Noting that the country lagged far behind in digital access, penetration, and capability, he said that bridging the digital divide, both within and between countries, must be a priority.  As an even more digitally engaged future awaits, effective steps are needed to protect cyberspace and its physical infrastructure”, calling for international cooperation in that regard and expressing support for a cybercrime treaty and cyber security guidelines.  Touching on governmental initiatives to address crime and foster public health as a tool to address violence, he highlighted the influx of illegal and unregistered small arms, the availability of which is driving an ever-increasing homicide rate.  “Jamaica does not manufacture guns,” he affirmed, adding that “in the same way there is concern about illegal drugs on the streets of the rich countries, there must be concern about guns on the streets of developing countries like Jamaica”.  He also expressed support for a Haitian-led process to arrive at sustainable solutions to the local challenges and urged the discontinuation of the embargo against Cuba.

Reaffirming the country’s “determination to further the call for the international recognition of reparatory justice as a necessary path to healing, restoration of dignity, and progress for people of African descent,” he said that the world cannot turn a blind eye to the systemic imbalances which persist after centuries of exploitation.  “The arc of international morality would not have completed its bend for the peoples of the African Diaspora, without open and inclusive exchanges on the dispensation of reparatory justice”, he added, recognizing the complexities associated with this sensitive issue, yet asking to take bold and creative steps to meet the moment.

Citing the Russian Federation’s invasion of Ukraine, he said that “we must never return to the days when military might is considered a right”, and strongly cautioned against actions which could signal the demise of a peaceful multilateral order.  Further, Member States must also address long-outstanding issues of reform and restructuring, including of the Security Council, he said, noting that a rotating seat for small island developing States would increase representation.  As a highly tourism-dependent country, Jamaica has invested in building resilience in the sector, he said, proposing the official designation of 17 February as Global Tourism Resilience Day and encouraging States to work together to have such commemoration in 2023.