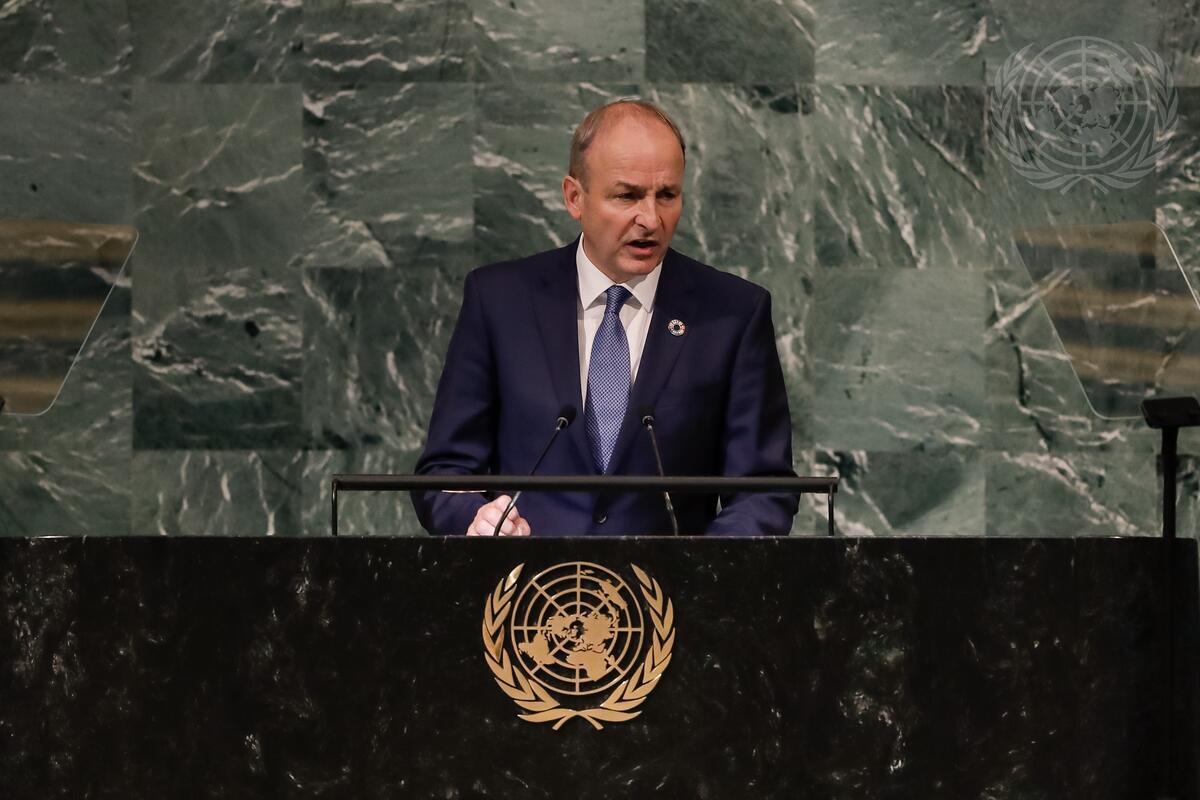 MICHEÁL MARTIN, Taoiseach of Ireland, voiced concern over the threat of widespread global hunger and food insecurity.  Drawing attention to the devastating impacts of climate change, with those who bear no responsibility for its causes being most affected, as well as the most blatant disregard for international law, he said it is not the international community’s systems or structures, nor our Treaties or Charters, that are fundamentally failing humanity.  It is the lack of political will to implement and uphold them.

As an elected member of the Security Council, Ireland has seen first-hand that political will and a commitment to the principles of the Charter of the United Nations can deliver results.  On Syria, he reported that Ireland had twice renewed the United Nations cross-border operation, which provides crucial aid to 4 million people in the country’s north-west.  Recalling progress on the women, peace and security agenda, Ireland has ensured that the role of women as peacebuilders, and as agents of change, is at the heart of United Nations peacekeeping missions.  Reiterating his country’s commitment to the protection of civilians, he called the Political Declaration on the use of Explosive Weapons in Populated Areas “a significant milestone”.  However, he voiced his deep frustration at the Council’s failure to adopt a resolution on climate and security, a text supported by 113 countries and vetoed by the Russian Federation.  In this context, he expressed concern over the looming humanitarian catastrophe and the violations of human rights and international humanitarian law in Tigray.

He went on to underscore that Israeli settlement-building undermines the territorial contiguity of a future Palestinian State, and jeopardizes a two-State solution.  On Afghanistan, since the Taliban takeover of Kabul, Ireland has resolutely defended the human rights of the Afghan people, particularly women and girls, and has increased its humanitarian aid and pushed for accountability for the Taliban’s actions.  The international community witnesses the ongoing erosion of the rights of Afghan citizens, particularly women and girls, but also those of ethnic and religious minorities and the lesbian, gay, bisexual, transgender, queer, intersex and questioning (LGBTQI+) community.

Furthermore, he continued, the heightened nuclear risks arising from the Russian aggression against Ukraine, and the threats to nuclear security resulting from military activity in and near civilian nuclear facilities in that country, were unprecedented.  Moscow’s illegal and immoral invasion of Ukraine carried dark echoes of Europe’s past, he asserted, voicing concern over an expansionist power brutally invading and occupying a peaceful neighbour.  “In Ukraine in July, I heard first-hand accounts from civilians of the brutality and violence visited upon men, women and children by occupying Russian forces,” he recalled, citing wanton destruction, and the uncovering of mass civilian graves, such as in Bucha and more recently in Izium.

He highlighted that the impact of Moscow’s aggression reaches far beyond Ukrainian or European shores and borders:  from the Horn of Africa to the Sahel, and beyond, food insecurity has reached a critical tipping point.  Combined with the impact of climate change, and of conflict, severe drought and other extreme weather events, the world faces a crisis that needs urgent action.  To that, Ireland has responded by increasing its humanitarian aid.  This has included direct humanitarian support of €78 million for the Horn of Africa, and sustained and early funding to other severely affected countries and regions, including Yemen, Afghanistan and the Sahel.  And yesterday, Ireland committed an additional €50 million over 3 years specifically to tackle acute child malnutrition.  Ending world hunger and ensuring the right to food must be placed firmly at the top of the political agenda, he asserted.