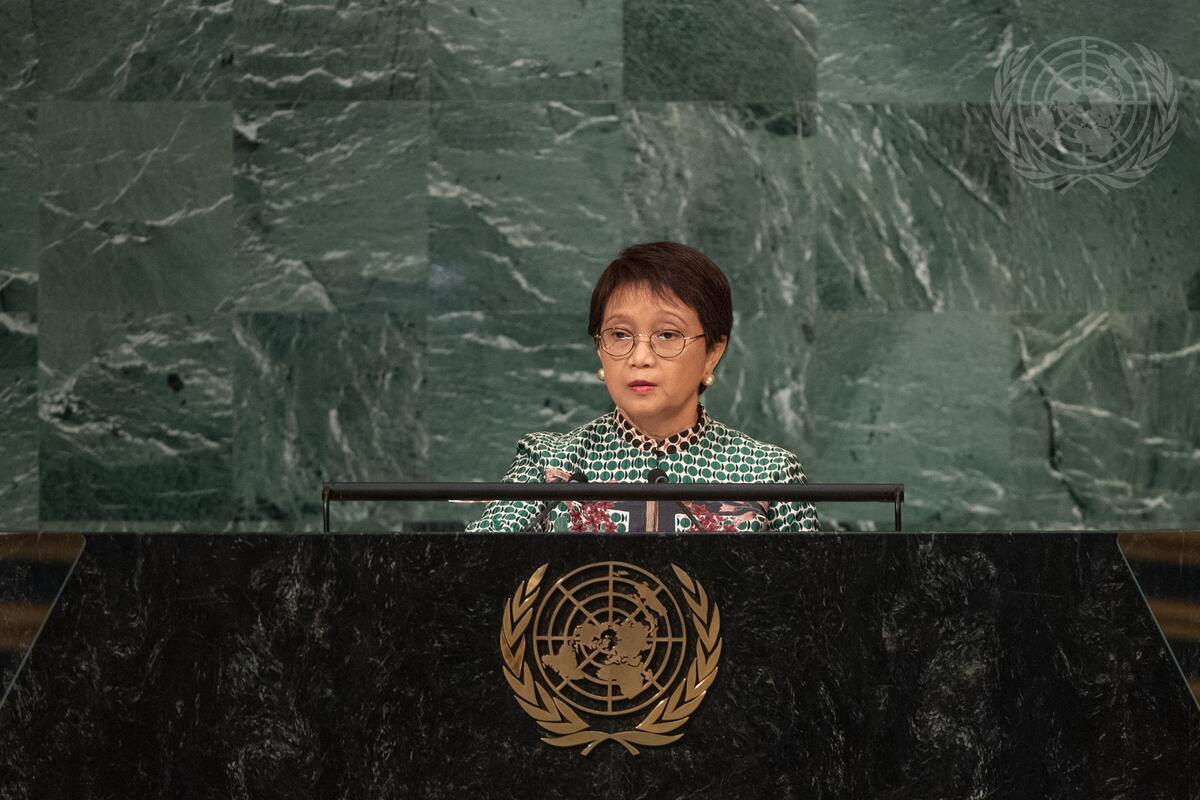 RETNO LESTARI PRIANSARI MARSUDI, Minister for Foreign Affairs of Indonesia, expressed worry over global crises, noting that the COVID-19 pandemic persists, the world economy remains sluggish, war has become a reality and violations of international law have become the norm.  Comparing the current moment in time to events leading up to the Second World War, she warned States against going down the same path.  She offered a new paradigm of collaboration and engagement; instead of containment and competition, she urged reigniting “the spirit of peace”.  Respect for sovereignty of nations is non-negotiable, she said, reiterating that repeated dialogue and cooperation will foster strategic trust between nations.  “These are the rules of the game, and we must apply them consistently, not selectively,” she said, noting that this was the message of her President upon his visit to Kyiv and Moscow earlier in 2022.  She expressed Indonesia’s solidarity with Palestine as well as with Afghanistan, emphasizing that the rights of all people be respected — including access to education for women and girls.

She highlighted collective responsibility for global recovery from the current crises.  Lamenting a marked lack of solidarity, trade discrimination and monopoly on supply chains, she reminded Member States that the pandemic “teaches us that no one is safe until everyone is”.  Underlining the importance of the upcoming G20 Summit in Indonesia as a “catalyst for recovery”, she added that “we cannot let global recovery fall at the mercy of geopolitics”.  She emphasized the need to address food and energy crises to avoid a fertilizer crisis that would affect billions of people, particularly in developing countries.  Collaboration and engagement would instil a collective responsibility to attain the 2030 Agenda for Sustainable Development and fight climate change, she added.

Condemning a post-war regional architecture constructed along the lines of minilateral groups that become involved in proxy wars between major Powers, she asserted that “we refuse to be a pawn in a new cold war”.  To contrast, the Association of Southeast Asian Nations (ASEAN) is an example of regional architecture that bolsters peace and stability.  Indonesia will chair ASEAN in 2023 and commits to honouring the group’s centrality in shaping order in the Indo-Pacific region.  She expressed deep concern about the Myanmar military’s “lack of commitment” in implementing the Five-Point Consensus and encouraged the international community to support Myanmar’s neighbours to bring democracy back to the country.  Recalling her new paradigm, she encouraged collaboration between all countries “both big and small, developed and developing”.  She called for reform within the United Nations that would transform it into a multilateral organization that delivers.  “It is no longer the time to talk the talk.  Now is the time to walk the talk,” she said.