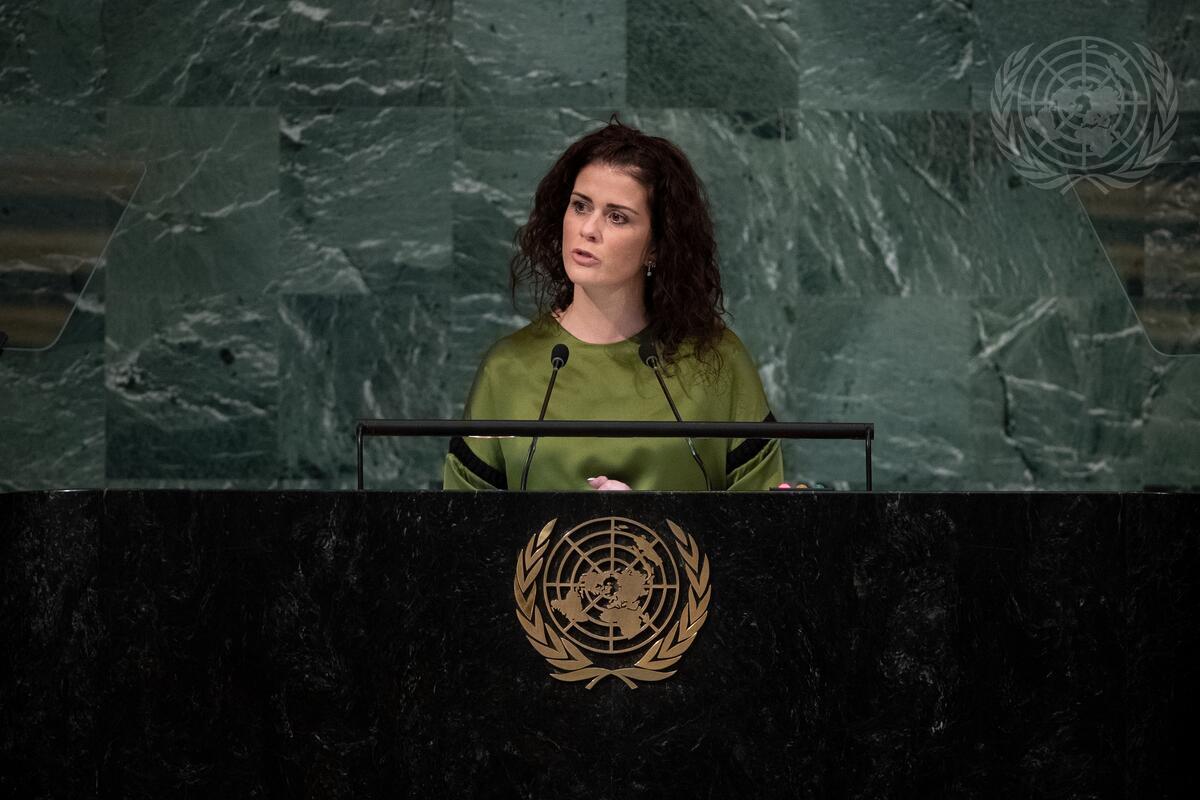 THÓRDÍS KOLBRÚN REYKFJÖRD GYLFADÓTTIR, Minister for Foreign Affairs of Iceland, in noting the Assembly Hall’s symbolism and the gavel’s Icelandic inscription, registered her country’s acute awareness that the world will be dominated by force if it is not governed by rules.  While there have been problems, conflicts and mistakes in the post-world war order, wars of territorial expansion have not been allowed.  Calling upon all leaders “to make sure that the fortunes of the past decades do not lead us down into dangerous complacency,” she advocated for a more representative and fit-for-purpose multilateral system.  To that end, Iceland fully supports the Secretary-General’s vision in his Our Common Agenda report.  The Russian Federation’s “unlawful and brutal full-scale invasion”, she continued, “was a rude awakening to how the world might look if the ability to destroy, rather than the capacity to create, is allowed to determine the fate of nations”.  Pleading for the madness to stop, she declared, “Ukraine must win.  Russia’s aggression must be defeated and the crimes perpetrated in its name must be accounted for and punished.”

Turning to food insecurity, poverty, hunger, armed conflict, climate change and natural catastrophes, she pledged to increase Iceland’s funding for humanitarian assistance.  As countries must accelerate the fight towards better climate resilience, his country has set ambitious targets to achieve carbon neutrality and full energy conversion by 2040 and increased its climate finance contributions to focus on a balanced approach to mitigation and adaptation.  All countries also have a responsibility to ensure the sustainable use and health of oceans for the benefit of all.  Tackling marine pollution, in particular plastic waste, must be a priority.  She welcomed the United Nations Environment Assembly resolution in Nairobi, expressed her country’s appreciation for the Lisbon Ocean Conference and noted the progress on a new agreement for the conservation and sustainable use of marine biodiversity in areas beyond national jurisdiction.  Reminding all that the 2030 Agenda for Sustainable Development cannot be neglected, she reiterated Iceland’s continued commitment, which it demonstrated through increased official development assistance (ODA).  As countries must also work towards a world free of nuclear weapons, she called out the Russian Federation as “the lone opponent of the final document and the only State that has lowered the threshold for using nuclear weapons by explicitly threatening to resort to these weapons of mass destruction.”

On human rights, Iceland remains committed to countering the regression of women and girls’ rights.  The rights of lesbian, gay, bisexual, transgender and intersex people, she noted, have either never been secured or have regressed.  The values and principles embodied in the United Nations Charter and the Universal Declaration of Human Rights are important in and of themselves and for harnessing individual creativity, entrepreneurial spirit and innovation.  In acknowledging the problem open societies face with the spread of lies and false information, she warned Governments against claiming a monopoly on truth.  The Russian Federation, she pointed out, is an example “where all forms of public debate and independent thinking has been criminalized”.  People must be able to freely challenge the status quo, express their opinions and debate the most sensitive issues.  These values are what Ukraine’s defenders want for their children and Sviatlana Tsikhanouskaya demands for Belarus.  Such values are denied to women and girls in Afghanistan and do not accept Mahsa Amini’s death in Iran.  Reminding all of their duty to respond, to not look the other way or wait for others to act, she urged all to stand with Ukraine, defend the multilateral system, protect nature, tackle poverty and deprivation, safeguard the rights of individuals and enable them to contribute.