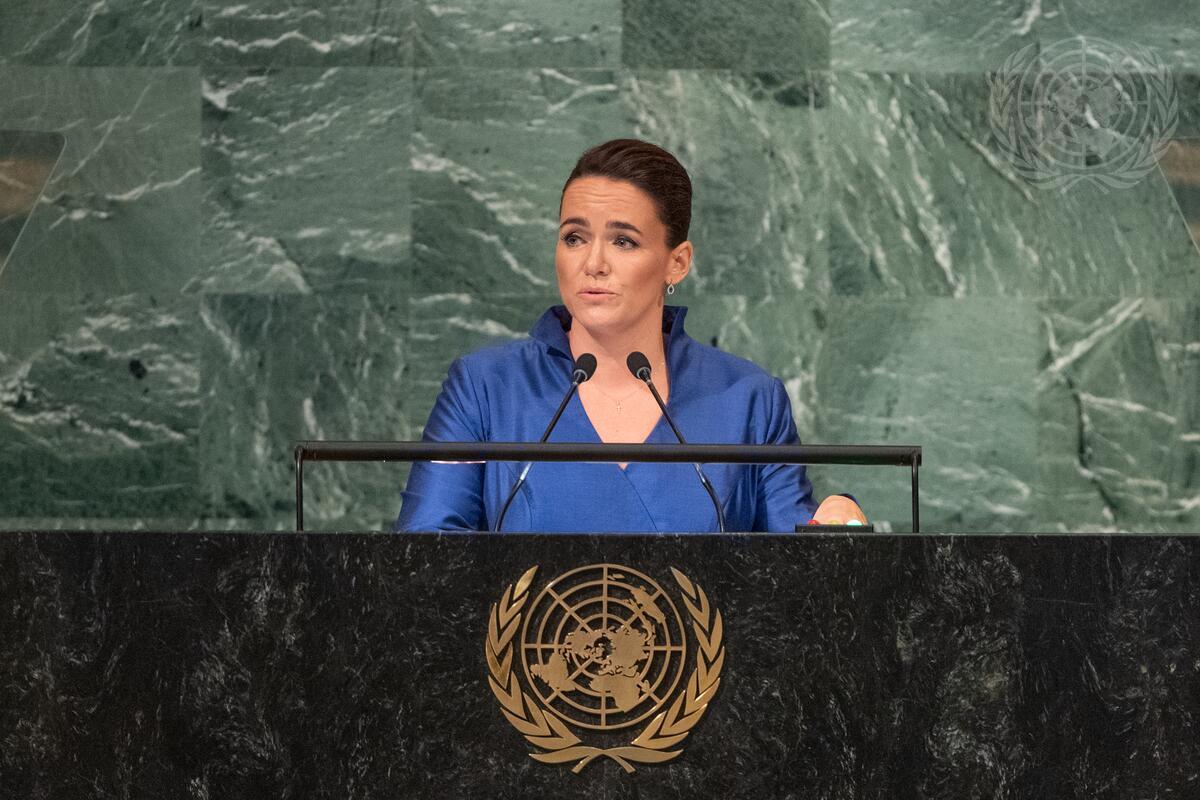 KATALIN NOVÁK, President of Hungary, quoting Queen Elizabeth II of the United Kingdom in a 2010 speech she made to the General Assembly, reminded the body that the work of “waging peace” is both difficult and only possible through interdependence.  She congratulated fellow Hungarian Csaba Kőrösi, who is serving as President of the Assembly for the seventy-seventh session.  Emphasizing her own position as the first female President of Hungary as well as a wife and mother, she expressed her own feeling of responsibility for preserving an environment of security and comfort for all future generations and reaffirmed Hungary’s commitment to Article I of the Charter of the United Nations, on maintaining peace and security.

She noted that according to the Council on Foreign Relations’ Global Conflict Tracker, there are currently 27 ongoing conflicts worldwide, all of which are described as either “worsening” or “unchanging”.  “Right now, there’s not a single conflict described as ‘improving’,” she said, also pointing to the intensive increase in the number of wars and armed conflicts since the Second World War.  Recalling Soviet tanks rolling on the streets in Budapest 11 years after the Second World War ended, and war in neighbouring countries following the peaceful regime change in 1989, she expressed particular concern over the war now raging in Europe, again in a neighbouring country, where “ethnic Hungarians living across the borders also shed their blood”.

She firmly condemned the Russian Federation’s war against Ukraine and described it as a security risk not only for Ukrainian citizens living in the war zone but for all people, citing the threat of escalation as cause for further worry and action.  “Since the beginning of this conflict, Hungarians have stood with the victims,” she said, explaining that the country is implementing its largest humanitarian operation in recent history, providing economic, social and humanitarian aid to Ukraine as well as shelter to nearly 1 million refugees.

Invoking historical lessons, she said:  “War is evil and leads nowhere.  A war only has victims,” and called for an investigation into war crimes committed against civilians in the strongest possible terms.  “These crimes must be documented, investigated and prosecuted by the relevant international institutions.  No crimes committed can go unpunished,” she stressed.  Dismissing the idea that “winning any war” should be the goal of the United Nations, she urged fellow Member States to declare peace as the major priority in the present conflict between the Russian Federation and Ukraine.

In a context of war, energy and food crises, she emphasized the importance of all global organizations set up to avoid war and preserve peace, but also to aid in preventing the dissemination of disinformation.  Quoting Winston Churchill in 1953, she said:  “Those who can win a war well rarely make a good peace, and those who could make a good peace would never have won the war,” urging the General Assembly to “make a good peace”.