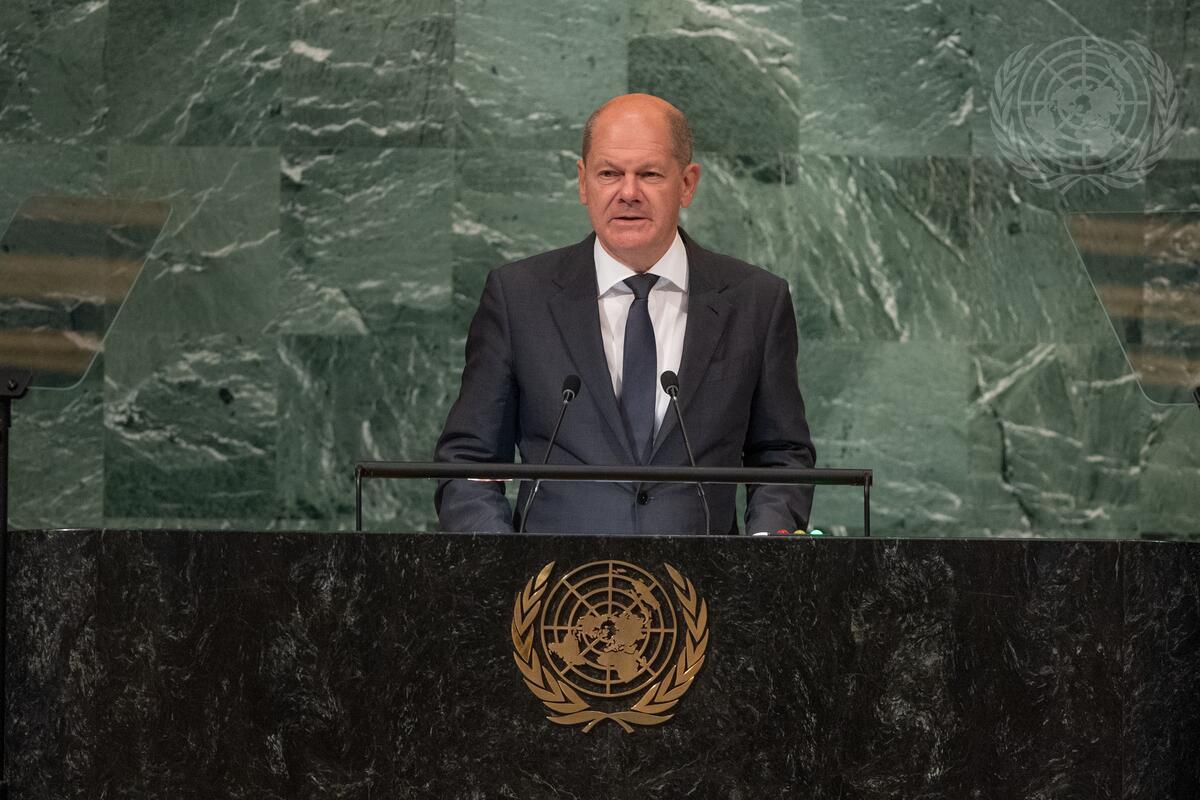 OLAF SCHOLZ, Chancellor of Germany, noting that some have seen emerging conflicts and crises “as a harbinger of a world without rules”, said that — while risks to the global order are real — “I don’t hold with the image of a world without rules”.  The world does have clear rules — rules that the Member States of the United Nations created together — and the problem, therefore, is not the absence of rules; rather, it is the lack of willingness to abide by and enforce them.  He underscored that, if the international community does not defend and strengthen the global order, then it will not face “chaos without rules” — instead, it will face a world “in which rules are made by those who can dictate them”.  The alternative to a rules-based world is not anarchy, but the dominion of the strong over the weak.  Stressing that the international community cannot be indifferent to “whether the rule of power or the power of rules wins the day”, he said that it can — and must — stand together to ensure a multilateral world by following three fundamental principles.

He said that, first, the Charter of the United Nations calls on Member States to uphold its purposes and principles.  The international community cannot stand idly by when a major nuclear power — a permanent member of the Security Council — seeks to shift borders through violence.  Underscoring that there is no justification for the Russian Federation’s war of occupation against Ukraine, he said that the return of imperialism is not only a disaster for Europe, but also for the global peaceful order.  Ukraine must be able to defend itself against the Russian Federation’s invasion and, to this end, Germany is providing financial, humanitarian and materiel assistance to Kyiv.  Further, together with its partners, Berlin has imposed tough economic sanctions on the Russian Federation’s leadership and economy.  Noting that Germany is also supporting Ukraine with the export of food and will support efforts to rebuild the country, he stressed that “our message is this: we stand firmly at the side of those under attack”.

The second principle, he noted, is that nations will be judged against the obligations into which they have entered, adding that “responsibility always begins at home”.  Spotlighting the issue of climate change — “the biggest challenge of our generation” — he pointed out that industrialized nations have a special responsibility in this regard.  Germany, for its part, stands by its pledges to support emerging economies and developing countries in their efforts to reduce emissions and adapt to climate change.  Recalling his country’s history — and its awareness of “just how fragile our civilization is” — he also underlined the obligation to respect and defend human rights.  Germany is the second-biggest donor to the United Nations system and of humanitarian assistance, and has taken in millions of refugees in recent years.  “This is something we are proud of,” he noted, while also urging action where people are suffering in prison camps in the Democratic People’s Republic of Korea, Syria, Iran or Belarus; when the Taliban deprives women and girls in Afghanistan of their rights; and when the Russian Federation commits war crimes.  He also urged China to implement the High Commissioner for Human Rights’ recommendations regarding the situation of the Uighurs in Xinjiang.

Third, he emphasized the need to adapt international rules and institutions to the reality of the twenty-first century.  For many years, Germany has been committed to reforming and expanding the Security Council to include the countries of the global South.  Asking for support for Germany’s own candidacy, he said that the dynamic countries and regions of Asia, Africa and southern America must be given a stronger political voice on the world stage.  “Nationalism and isolation will not solve the challenges of our age,” he stressed, urging more cooperation, partnership and involvement and highlighting his countries efforts towards these ends through its 2022 presidency of the G7 and through international partnerships to fight hunger, mobilize finances for public and private infrastructure investment, and implement the Paris Agreement.

Noting that the Charter of the United Nations begins with the words “we the peoples” — not “we the Member States” or “we the delegates” — he stressed that Governments have an obligation to their peoples.  They are owed a global order that allows them to live in peace, which protects their rights and opens opportunities for education, health and development.  “Such an order doesn’t come about by itself,” he noted, stressing that it is the United Nations’ task to defend, develop and strengthen that order.  And, in this, Germany extends the hand of cooperation to all, he added.