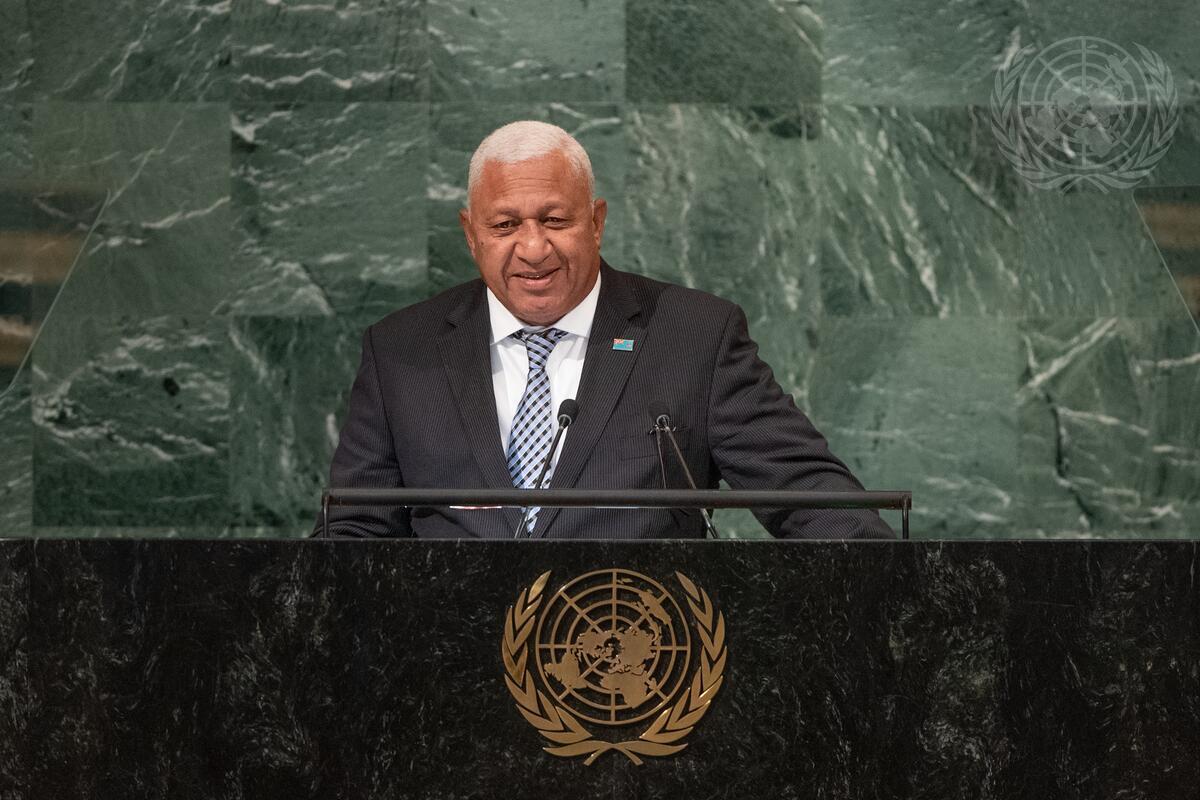 JOSAIA VOREQE BAINIMARAMA, Prime Minister and Minister for iTaukei Affairs, Sugar Industry, Foreign Affairs and Forestry of Fiji, said that in this year of challenge, he condemns not one, but three great global conflicts.  First, he said was the Russian Federation’s war of aggression on Ukraine, “a scourge that reflects a brutal mentality of conquest and empire”.  Spotlighting the Pacific people’s experience with the horror of nuclear fallout, he wholly denounced Russian Federation President Vladimir V. Putin’s threatened use of nuclear weapons and appealed to him to bring the war to a speedy close.  Second, he spoke of the climate war that humanity is waging on itself, ecosystems and oceans.  “This war is not fought with bullets and bombs, but apathy, denial and a lack of courage,” he said, calling upon the world, including multilateral banks, to answer the calls of the small, least responsible States that stand to lose the most.  Third, he condemned “the cold war of difference against citizens of small islands and States” who bear the brunt of global shocks most.

Next, he drew attention to the lives, progress and aspirations of those threatened as a result of the inaction of world leaders.  In Fiji, a new constitution was adopted that echoes the spirit of the Charter’s promise to uphold equal rights for all peoples, regardless of their background, religion, ethnicity, gender, age, physical ability or province, he said.  Equal identity and citizenship are guaranteed; strong institutions established; the right to a clean and healthy environment and indigenous land ownership protected.  Economic progress, investments in infrastructure and an education revolution.  Primary and secondary education is free and accessible to all, and today Fijian women outnumber men in universities.  Explaining how the pandemic negatively impacted the country’s economy, he stressed that exactly in times of crisis its constitutional commitments to every Fijian have served and protected them best — not slashing a cent of pensions and payments to the elderly and disabled and achieving a near universal vaccination rate.  He expressed optimism over the period ahead, pointing to predictions of double-digit growth that finds its basis in good policy that prepared the country for the post-pandemic recovery.  The Government is now able to help the most vulnerable meet the globally rising cost of food, fuel and other essentials.

Pointing to the future, he called the period until 2030 the most defining ever for his country’s people and the planet’s future.  The crisis of a warming planet will imperil every gain that every nation has made, and if the world’s leaders fail to halt global temperature rise, they will crush any hope of improving citizens quality of life.  Since 2014, 14 cyclones hit Fiji, stealing lives, levelling homes, destroying schools and traumatizing many, particularly the young.  He challenged leaders from high-emitting nations to name a greater global injustice than the price that young Pacific islanders pay for climate change.  While building back better to the standards demanded by a warming world requires borrowing millions, the archaic architecture of multilateral development banks and global financial services give little access to grants or concessional climate and climate adaptation financing.  Where Fiji legislated a net-zero commitment by 2050, the world’s collective commitments remain trifling, he said, urging developed nations to deliver on their three-year overdue $100 billion climate finance commitment at the twenty-seventh Conference of the Parties in Egypt.  He warned them to only come if they arrive true to their current climate finance commitments and ready to agree to a $750 billion loss and damage mechanism, with 10 per cent dedicated for small island States.  The Fijian story is that of David versus Goliath, he said — a small State against nations, corporations and interests far bigger than it.  He called upon the world to join them as “this is not the time for words, this is the time for will and a time for courage”.