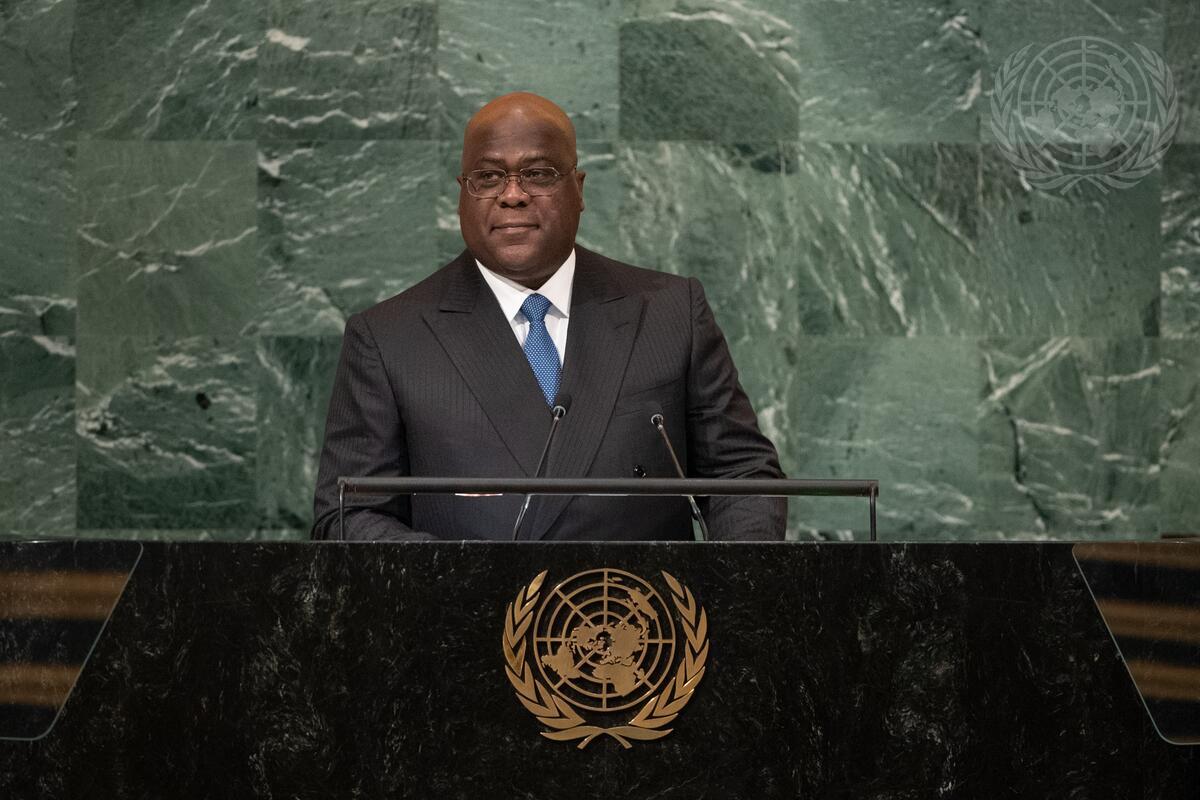 FÉLIX-ANTOINE TSHISEKEDI TSHILOMBO, President of the Democratic Republic of the Congo, said international peace and security crystallizes around the fight against terrorism, as well as calming hotbeds of conflict in Europe and Africa.  Conflict spares no continent, and is metastasizing throughout Africa — with terrorists killing barbarically and destabilizing States in the name of religious extremism.  His country is a victim, and as a member of the Global Coalition to Defeat ISIS, called for the United Nations to implement its recommendations.

The war between the Russian Federation and Ukraine is a gaping wound disrupting international trade, he stressed, and the United Nations must intervene more firmly — noting Africa has experience in managing security crises by armed groups.  While recognizing the brave United Nations peacekeepers who’ve lost their lives, despite massive United Nations presence and 23 years of diplomatic support, the violence continues — with several agreements signed with armed groups and even neighbouring countries lasting only a few months.  Despite abundant goodwill from his Government, some neighbours “thank” it through aggression and support for terrorist armed groups — as in the case of Rwanda:  not only via direct incursions by armed forces in March and occupation of part of North Kivu province, but through massive support of the 23 March Group — which shot down a United Nations Organization Stabilization Mission in the Democratic Republic of the Congo (MONUSCO) helicopter killing eight “Blue Helmets”, a war crime.

His delegation asked the President of the Council to officially distribute a report by the United Nations Group of Experts on the situation in the east of the country, as to do otherwise not only encourages Rwandan war crimes, but also feeds legitimate suspicions of the Congolese people on the impartiality of the United Nations and complicity of some of its Member States in the crimes, he said.  Further, his Government has requested renewal of the progressive responsible withdrawal of MONUSCO.  Stressing that the Congolese State and civil society will never allow tribal, ethnic or xenophobic hate speech in the country, he affirmed that no one can claim that discourse is happening to justify their criminal adventures.  The Democratic Republic of the Congo does not and will never commit genocide.  He said that joint efforts have decapitated the Democratic Forces for the Liberation of Rwanda.  He demanded the withdrawal of M23, the return of displaced Congolese and the unconditional end of Rwandan army support for that terrorist group, along with deployment of the East Africa Regional Force, and the lifting all obstacles to restructure the armed forces, including acquiring military equipment.

He noted that Africa has sufficient renewable energy sources and raw materials, with his country among the primary producers of minerals for energy transition including cobalt, lithium, nickel and manganese.  It will promote hydroelectricity, solar power, geothermal energy and gas deposits and will continue to be a “solution country” in the fight against global warming.  Calling for rich countries to cede part of their Special Drawing Rights at the IMF and alleviate the debt burden of low-income countries, he also urged that sanctions on Zimbabwe be lifted — an injustice against an innocent people.  Council reform must include the legitimate claim for two additional permanent and two non-permanent seats for Africa, including with veto power.  Given the need to create spaces of gender equality for women, including through the actions of men, his Government launched the Conference of Men on Positive Masculinity leading to an African Union declaration, he said.